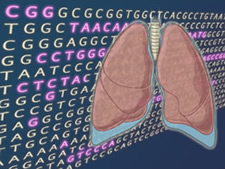 A consortium that includes scientists from the National Human Genome Research Institute (NHGRI) has identified a gene associated with an increased susceptibility to lung cancer in family members with a history of the disease. The new finding is reported in the April 15, 2009 issue of the journal Clinical Cancer Research.

Lung cancer, while often preventable, exacts a high toll. Each year, more than 1 million people worldwide die of the disease, including more than 150,000 in the United States. Smoking is by far the greatest risk factor for lung cancer, and is associated with more than 75 percent of lung cancer deaths. But some families bear more of the brunt of lung cancer than others.

The authors of the new report are part of a nationwide study of lung cancer called the Genetic Epidemiology of Lung Cancer Consortium (GELCC), which consists of 12 research institutions and universities, including NHGRI and the National Cancer Institute. GELCC is now in its 10th year of lung cancer research.

In a 2004 study conducted by GELCC, the researchers identified a large region on human chromosome 6 that conferred greater lung cancer risk in families with many affected individuals. Subsequent painstaking analysis to pinpoint the source of the elevated risk now has paid off with the identification of the precise culprit, a gene called RGS17.

In their current study, researchers conducted fine-mapping of the suspect region of chromosome 6 in members of families in which five or more individuals over multiple generations were diagnosed with lung cancer. The region contains approximately 100 genes. Precise computational analysis uncovered similar variants in the DNA sequence for members of the families with lung cancer. These variants, called single nucleotide polymorphisms (or SNPS) directed the researchers to the RGS17 gene.

Researchers validated this finding through laboratory experiments involving tumor samples from patients with lung cancer, as well as by growing human tumor cells in mice. Lung cancer samples were more likely to have a version of the RGS17 gene that produces high levels of the encoded protein than were normal tissue samples from individuals with no cancer. The tumor cells also multiplied more slowly when researchers took steps to suppress production of the encoded RGS17 protein. In addition, human lung cancer tumor cells with a suppressed version of the RGS17 gene had significantly decreased growth when injected into mice.

The conclusions of this analysis are that RGS17 plays a major role in lung cancer susceptibility, and individuals who carry the higher-risk version of this gene have an increased susceptibility to lung cancer when exposed to environmental risk factors, such as smoking.

Not content to rest upon its laurels, GELCC is already forging ahead into new areas of research. According to Dr. Bailey-Wilson, the group now plans to explore the mechanism by which RGS17 acts to increase lung cancer risk, as well as to continue its search for additional genes that influence susceptibility to familial lung cancer.