Research Will Lead to Better Understanding of Genetic Basis of Disease 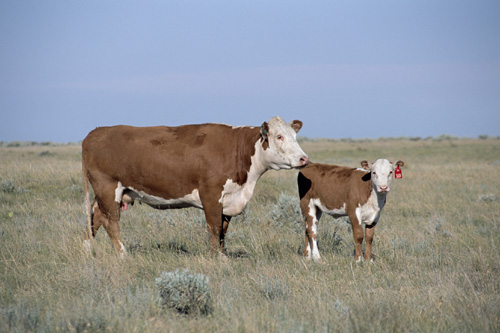 Bethesda, Md., Thurs., April 23, 2009 — The U.S. Department of Agriculture and the National Institutes of Health announced today that an international consortium of researchers has published the genome of domestic cattle, the first livestock mammal to have its genetic blueprint sequenced and analyzed. The landmark research will bolster efforts to produce better beef and dairy products and lead to a better understanding of the human genome.

The sequencing and analysis of the bovine genome was funded in part by USDA's Cooperative State Research, Education, and Extension Service (CSREES) and Agricultural Research Service (ARS), which contributed approximately $10 million. Approximately $25 million was contributed to the project by the National Human Genome Research Institute (NHGRI), part of the NIH, which is a component of the U.S. Department of Health and Human Services.

"The cattle industry is extremely important for U.S. agriculture with more than 94 million cattle in the United States valued at $49 billion," said Agriculture Secretary Tom Vilsack. "Understanding the cattle genome and having the sequence will allow researchers to understand the genetic basis for disease in domestic cattle and could result in healthier production of meat and milk while reducing producers' dependence on antibiotics."

In a paper published in the journal Science, researchers from the Bovine Genome Sequencing Project estimate that the genome of the domestic cattle (Bos taurus) contains approximately 22,000 genes and shares about 80 percent of its genes with humans. The researchers also report that the organization of human chromosomes is closer to that of domestic cattle than to those of rats or mice.

The analyses, which involved comparing the domestic cattle genome sequence to those of the human, dog, mouse, rat, opossum and platypus, provide critical insights into the structure and function of the human genome. The findings will also assist researchers working to improve the quality and safety of beef and dairy products. In addition, genomic information can be used to develop better strategies for treating and preventing diseases that affect cattle. Some of those diseases, including bovine spongiform encephalopathy, commonly known as mad cow disease, also can be transmitted — although very rarely — to humans.

Like humans and other mammals, the chromosomes of domestic cattle contain segmental duplications, which are large, almost identical copes of DNA present in at least two locations in a genome. Segmental duplications in the human genome are associated with a variety of human disorders, including a form of mental retardation and other neurological and birth defects.

In the domestic cattle genome, researchers found that some of these chromosomal rearrangements affect genes related to immunity, metabolism, digestion, reproduction and lactation. For instance, researchers think some of these changes may explain the unique ability of cattle to convert grass and other low-energy food sources into high-energy muscle, fat and milk.

Segmental duplications in the domestic cattle genome have also resulted in specialized roles for genes involved in immune response, such as those that make antimicrobial proteins in milk and their intestines. Researchers think these genes developed over time in response to the diversity of microbes that domestic cattle encounter and the vulnerability of animals that live in large herds to the spread of infectious diseases.

The breed of cattle selected for genome sequencing was Hereford, which is used in beef production. The effort to sequence and analyze the domestic cattle genome took six years and involved more than 300 scientists from 25 countries.

A related paper also appears in today's issue of Science. In that paper, the Bovine HapMap Consortium unveils a map that charts key DNA differences, called haplotypes, among the diverse branches of the bovine tree. The scientists compared the Hereford genome sequence with those of six other breeds: the Holstein, Angus, Jersey, Limousin, Norwegian Red and Brahman. Follow-up studies were then done on 497 cattle from 19 geographic and biologically distinct breeds. The species represent the humpless taurine cattle most commonly found in Europe, Africa and East and West Asia and the indicine cattle found in India, South and West Asia and East Africa.

Generally, the bovine HapMap indicates that present day cattle came from a diverse ancestral population from Africa, Asia and Euroupe, that has undergone a recent rapid decrease in population size, probably due to domestication. Researchers can use the bovine HapMap to track DNA differences between cattle breeds to assist discovery of traits for better meat and milk production.

"The bovine HapMap will be a valuable resource and will transform how dairy and beef cattle are bred," said Richard Gibbs, Ph.D., at Baylor College of Medicine's Human Genome Sequencing Center in Houston. "Genetic tools are already being developed and proving useful to the dairy industry and we predict they will be applied to improve the beef industry. We hope the information will also be used to come up with innovative ways to reduce the environmental impact of cattle, such as greenhouse gases released by herds."

Along with the Science papers, researchers published 20 companion reports describing more detailed analyses of the domestic cattle genome sequence in journals from the open access publisher BioMed Central. All of the articles can be freely accessed at www.biomedcentral.com/series/bovine.

Sequencing the bovine genome is part of USDA's "Blueprint for USDA Efforts in Agricultural Animal Genomics," a 10-year plan developed in 2007 for research, education and extension in animal genomics in an effort to improve animal production practices.

A high-resolution photo of the Hereford domestic cattle, named L1 Dominette 01449, whose DNA was sequenced is available at: www.genome.gov/dmd/img.cfm?node=Photos/Animals/Cow&id=79110.

The National Institutes of Health (NIH) —"The Nation's Medical Research Agency" — includes 27 Institutes and Centers and is a component of the U. S. Department of Health and Human Services. It is the primary federal agency for conducting and supporting basic, clinical and translational medical research, and it investigates the causes, treatments and cures for both common and rare diseases. For more information about NIH and its programs, visit www.nih.gov.