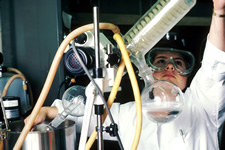 Bethesda, Md., Wed., May 20, 2009 - The National Institutes of Health is launching the first integrated, drug development pipeline to produce new treatments for rare and neglected diseases. The $24 million program jumpstarts a trans-NIH initiative called the Therapeutics for Rare and Neglected Diseases program, or TRND.

The program is unusual because TRND creates a drug development pipeline within the NIH and is specifically intended to stimulate research collaborations with academic scientists working on rare illnesses. The NIH Office of Rare Diseases Research (ORDR) will oversee the program, and TRND's laboratory operations will be administered by the National Human Genome Research Institute (NHGRI), which also operates the NIH Chemical Genomics Center (NCGC), a principal collaborator in TRND. Other NIH components will also participate in the initiative.

A rare disease is one that affects fewer than 200,000 Americans. NIH estimates that, in total, more than 6,800 rare diseases afflict more than 25 million Americans. However, effective pharmacologic treatments exist for only about 200 of these illnesses. Many neglected diseases also lack treatments. Unlike rare diseases, however, neglected diseases may be quite common in some parts of the world, especially in developing countries where people cannot afford expensive treatments. Private companies seldom pursue new therapies for these types of illnesses because of high costs and failure rates and the low likelihood of recovering investments or making a profit.

"NIH is eager to begin the work to find solutions for millions of our fellow citizens faced with rare or neglected illnesses," said NIH Acting Director Raynard S. Kington, M.D., Ph.D. "The federal government may be the only institution that can take the financial risks needed to jumpstart the development of treatments for these diseases, and NIH clearly has the scientific capability to do the work."

The drug development process is complicated and expensive. Studies suggest that it currently takes more than a dozen years and hundreds of millions of dollars to take a potential drug from discovery to the marketplace. And the failure rate is high.

"This initiative is really good news for patients with rare or neglected diseases," said ORDR Director Stephen C. Groft, Pharm.D. "While Congress has previously taken important steps to help these patients, such as providing incentives for drug companies under the Orphan Drug Act, this is the first time NIH is providing support for specific, preclinical research and product development known to be major barriers preventing potential therapies from entering into clinical trials for rare or neglected disorders. While we do not underestimate the difficulty of developing treatments for people with these illnesses, this program provides new hope to many people world-wide."

Typically, drug development begins when academic researchers studying the underlying cause of a disease discover a new molecular target or a chemical that may have a therapeutic effect. Too often, the process gets stuck at the point of discovery because few academic researchers can conduct all the types of studies needed to develop a new drug. If a pharmaceutical company with the resources to further the research does get involved, substantial preclinical work begins with efforts to optimize the chemistry of the potential drug. This involves an iterative series of chemical modifications and tests in progressively more complex systems - from cell cultures to animal tests - to refine the potential medicine for use in people. Only if these stages are successful can a potential treatment move to clinical trials in patients.

Unfortunately, the success rate in this preclinical process is low, with 80 to 90 percent of projects failing in the preclinical phase and never making it to clinical trials. And the costs are high: it takes 2 to 4 years of work and $10 million, on average, to move a potential medicine though this preclinical process. Drug developers colloquially call this the "Valley of Death."

TRND will work closely with disease-specific experts on selected projects, leveraging both the in-house scientific capabilities needed to carry out much of the preclinical development work, and contracting out other parts, as scientific opportunities dictate. Its strategies will be similar to approaches taken by pharmaceutical and biotechnology companies, but TRND will be working on diseases mostly ignored by the private companies. Importantly, TRND will also devote some of its efforts to improving the drug development process itself, creating new approaches to make it faster and less expensive.

If a compound does survive this preclinical stage, TRND will work to find a company willing to test the therapy in patients. There are several stages to the clinical trials process that can take several years before the safety and efficacy of a new drug is determined. FDA will only approve a drug for general use after it passes these trials. The clinical trials process is also expensive, but the failure rate is lower at this stage.

"NIH traditionally invests in basic research, which has produced important discoveries across a wide range of illnesses," said NHGRI Acting Director Alan E. Guttmacher, M.D. "Biotechnology and pharmaceutical companies have enormous strength and experience in drug development, but to maximize return-on-investment work primarily on common illnesses. TRND will develop promising treatments for rare diseases to the point that they are sufficiently "de-risked" for pharmaceutical companies, disease-oriented foundations, or others, to undertake the necessary clinical trials. NIH's goal is to get new medications to people currently without treatment, and thus without hope."

NIH already has many components of the drug development pipeline within its research programs. TRND will begin its work in collaboration with the NIH Chemical Genomics Center (NCGC), a center initially developed as part of the NIH Roadmap for Medical Research. NCGC has developed a robotic, high-throughput screening system and a library of more than 350,000 compounds that it uses to make basic discoveries and probe cellular pathways. NCGC also has developed a team of researchers skilled in developing assays representing disease processes that can be tested in its screening system, and has extensive experience building collaborative projects with investigators from across the research community. Molecules with potential therapeutic properties that emerge from the NCGC screening process could be fed into the TRND drug development pipeline.

"With this new funding, TRND will develop teams of scientists who can do the hard work of optimizing chemicals that we or others discover that may treat rare diseases and turn them into actual drugs," said NCGC Director Christopher P. Austin, M.D., who is also the Senior Advisor for Translational Research to the NHGRI Director. "This will still be hard work and it will take time and produce failures. Unlike traditional drug development, however, where only successes are published, we will publish our failures as well, so everyone in the drug development community can learn from them. That alone could be revolutionary."

If all the preclinical hurdles can be crossed, a possible treatment must still be tested in a series of clinical trials. TRND will seek to take advantage of several NIH resources that can help launch human studies, including the NIH Clinical Center, the NIH Rapid Access to Interventional Development (NIH-RAID), and the Clinical and Translational Science Awards (CTSA) program.

Numerous obstacles impede the development of new drugs for rare and neglected diseases. In addition to the reluctance of private companies to risk their capital on a potentially low return, relatively few basic researchers study rare diseases, so the underlying cause of the illness frequently remains unknown. And, because rare diseases are rare, researchers often have difficulty recruiting enough people with the disorder to participate in a clinical trial once a candidate compound reaches the stage where it can be tested in people. Moreover, for many rare diseases, the natural history of the disease is poorly understood, so researchers lack the needed clinical measures (such as blood pressure) that can demonstrate whether a treatment is working.

To address these difficulties, TRND will seek a wide range of collaborations with academic researchers, as well as partnerships with patient advocacy organizations, disease-oriented foundations and others interested in treatments for particular illnesses. TRND's leaders hope that the collaborations will help lay the groundwork for clinical trials once that point in drug development is reached.

TRND is currently setting up an oversight process to help it decide which projects that address thousands of rare and neglected diseases will be pursued. Leadership currently envisions a small number of diseases being studied each year, with strict criteria used to determine which molecules will be studied for which diseases. NIH expects to use existing intellectual property policies to transfer licenses for TRND-discovered drugs to private companies or others for development, clinical testing and marketing.

Frequently asked questions (FAQ) about this new program are available online at:

For more information on TRND, go to http://trnd.nih.gov.

The National Human Genome Research Institute is one of the 27 institutes and centers at the NIH, an agency of the Department of Health and Human Services. The NHGRI Division of Intramural Research develops and implements technology to understand, diagnose and treat genomic and genetic diseases. Additional information about NHGRI can be found at its Web site, www.genome.gov.

The Office of Rare Diseases Research is one of the programmatic offices in the Office of the Director of the NIH. For more about ORDR, visit http://rarediseases.info.nih.gov.

The National Institutes of Health (NIH) - "The Nation's Medical Research Agency" - includes 27 Institutes and Centers and is a component of the U. S. Department of Health and Human Services. It is the primary federal agency for conducting and supporting basic, clinical and translational medical research, and it investigates the causes, treatments and cures for both common and rare diseases. For more information about NIH and its programs, visit www.nih.gov.

To view the PDF on this page you will need Adobe Reader.