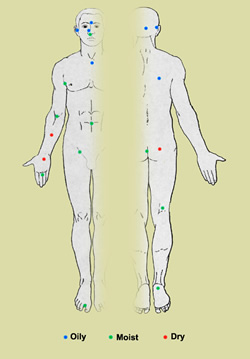 Bethesda, Md., Thurs., May 28, 2009 — The health of our skin — one of the body's first lines of defense against illness and injury — depends upon the delicate balance between our own cells and the millions of bacteria and other one-celled microbes that live on its surface. To better understand this balance, National Institutes of Health researchers have set out to explore the skin's microbiome, which is all of the DNA, or genomes, of all of the microbes that inhabit human skin. Their initial analysis, published today in the journal Science, reveals that our skin is home to a much wider array of bacteria than previously thought.

"Our work has laid an essential foundation for researchers who are working to develop new and better strategies for treating and preventing skin diseases," said Julia A. Segre, Ph.D., of the National Human Genome Research Institute (NHGRI), who was the study's senior author. "The data generated by our study are freely available to scientists around the world. We hope this will speed efforts to understand the complex genetic and environmental factors involved in eczema, psoriasis, acne, antibiotic-resistant infections and many other disorders affecting the skin."

Drawing on the power of modern DNA sequencing technology and computational analysis, the research team from NHGRI, the National Cancer Institute (NCI) and the NIH Clinical Center uncovered a far more diverse collection of microbes on human skin than had been detected by traditional methods that involved growing microbial samples in the laboratory.

The researchers extracted DNA from each sample and sequenced the 16S ribosomal RNA genes, which are a type of gene that is specific to bacteria. The researchers identified more than 112,000 bacterial gene sequences, which they then classified and compared. The analysis detected bacteria belonging to 19 different phyla and 205 different genera, with diversity at the species level being much greater than expected.

The research also generated information that may prove useful in efforts to combat the growing problem of methicillin-resistant Staphylococcus aureus (MRSA), a bacterium that can cause serious, even life-threatening, infections. While it is known that a significant proportion of people have colonies of S. aureus inside their noses, the NIH team checked to see where else on the body surface that these bacteria thrive. They found that the crease of skin outside the nose is the site with the microbial community most similar to that found inside the nose.

"Not only does our work shed new light on understanding an important aspect of skin biology, it provides yet another example of how genomic approaches can be applied to study important problems in biomedical research," said NHGRI's Scientific Director Eric D. Green, M.D., Ph.D., who is a co-author of the study. "This also demonstrates what can be achieved through efforts that pull together researchers from across NIH."

NIH recently launched the Human Microbiome Project, a part of the NIH Roadmap for Medical Research, to discover what microbial communities exist in different parts of the human body and to explore how these communities change with disease. In addition to skin and nose, that project is sampling the digestive tract, the mouth and the vagina.

The skin sites selected for the Science study represent three microenvironments: oily, moist and dry. The oily sites included between the eyebrows, beside the nose, inside the ear, back of the scalp, and upper chest and back. Moist areas were inside the nose, armpit, inner elbow, webbed area between the middle and ring fingers, side of the groin, top fold of the buttocks, behind the knee, bottom of the foot and the navel. Dry areas included the inside surface of the mid-forearm, the palm of the hand and the buttock. Researchers found that dry and moist skin had a broader variety of microbes than did oily skin. Oily skin contained the most uniform mix of microbes.

To look for changes that may occur in the skin microbiome over time, the researchers sampled some volunteers twice, with the samples being taken about four to six months apart. Most of the re-sampled volunteers were more like themselves over time than they were like other volunteers. However, the stability of the microbial community was dependent on the site surveyed. The greatest stability was found in samples from inside the ear and nose, and the least stability was found in samples from behind the knee.

"Our results underscore that skin is home to vibrant communities of microbial life, which may significantly influence our health," said the study's first author, Elizabeth Grice, Ph.D., who is a postdoctoral fellow at NHGRI.

To download a high-resolution illustration depicting the body sites sampled for the Science study, go to www.genome.gov/dmd/img.cfm?node=Photos/Graphics&id=85346.

NCI leads the National Cancer Program and the NIH effort to dramatically reduce the burden of cancer and improve the lives of cancer patients and their families, through research into prevention and cancer biology, the development of new interventions, and the training and mentoring of new researchers. For more information about cancer, please visit the NCI Web site at www.cancer.gov or call NCI's Cancer Information Service at 1-800-4-CANCER (1-800-422-6237).

The NIH Clinical Center (CC) is the clinical research hospital for the National Institutes of Health. Through clinical research, physician-investigators translate laboratory discoveries into better treatments, therapies and interventions to improve the nation's health. For more information, visit http://clinicalcenter.nih.gov.