Findings May Point to New Avenues for Treatment, Prevention 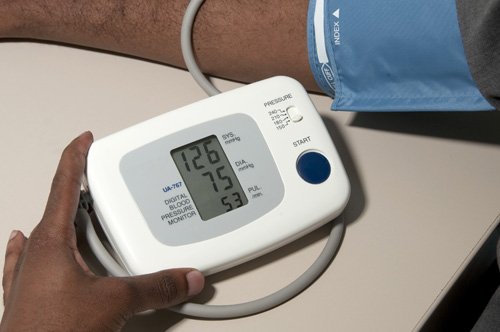 Bethesda, Md., Thurs., July 16, 2009 — A team led by researchers from the National Institutes of Health today reported the discovery of five genetic variants related to blood pressure in African-Americans, findings that may provide new clues to treating and preventing hypertension. The effort marks the first time that a relatively new research approach, called a genome-wide association study, has focused on blood pressure and hypertension in an African-American population.

About one-third of U.S. adults suffer from hypertension. The burden is considerably greater in the African-American community, in which the condition affects 39 percent of men and 43 percent of women.

"This work underscores the value of using genomic tools to untangle the complex genetic factors that influence the risk for hypertension and other common diseases," said Eric Green, M.D., Ph.D., scientific director for the National Human Genome Research Institute (NHGRI), part of NIH. "We hope these findings eventually will translate into better ways of helping the millions of African-Americans at risk for hypertension, as well as improved treatment options for other populations."

In addition to NHGRI researchers, scientists from the Coriell Institute for Medical Research in Camden, N.J.; Boston University; and Howard University, in Washington, D.C., collaborated on the study, which was published in the July 17 online issue of PLoS Genetics.

To produce their findings, researchers analyzed DNA samples from 1,017 participants in the Howard University Family Study, a multigenerational study of families from the Washington, D.C., metropolitan area who identified themselves as African-American. Half of the volunteers had hypertension and half did not. To see if there were any genetic differences between the two groups, researchers scanned the volunteers' DNA, or genomes, analyzing more than 800,000 genetic markers called single-nucleotide polymorphisms (SNPs).

"This is the first genome-wide association study for hypertension and blood pressure solely focused on a population with majority African ancestry," said the study's senior author, Charles Rotimi, Ph.D., NHGRI senior investigator and director of the trans-NIH Center for Research on Genomics and Global Health (CRGGH). "Although the effect of each individual genetic variant was modest, our findings extend the scope of what is known generally about the genetics of human hypertension."

In a genome-wide association study, researchers identify strategically selected markers of genetic variation. If disease status differs for individuals with certain genetic variants, this indicates that something in that chromosomal neighborhood likely influences the disease. Variants detected using this approach can accurately point to the region of the genome involved, but may not themselves directly influence the trait.

An existing class of anti-hypertension drugs, called calcium channel blockers, already targets one of the genes, CACNA1H. However, the additional genes may point to new avenues for treatment and prevention.

This study was supported by the NHGRI, CRGGH, and the National Institute of General Medical Sciences, all part of NIH; and by a W.W. Smith Foundation grant to the Coriell Institute. The Howard University General Clinical Research Center carried out the enrollment of study participants.

To learn more about the genome-wide association approach, visit www.genome.gov/20019523/genomewide-association-studies-fact-sheet/.