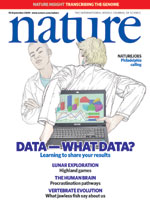 Rapid release of prepublication genomic data aims to advance scientific progress and provide a public benefit in the form of biomedical discoveries. Scientists, ethicists, lawyers and editors met in Toronto in May to reaffirm, refine and extend data release policies that first were introduced in 1996. The group's policy recommendations — dubbed The Toronto Statement — and a call for discussion is published in an Opinion article the Sept. 10 issue of the journal Nature.

Current guidelines, developed at meetings in Bermuda and Fort Lauderdale, Fla., reserve the right of researchers at DNA sequencing centers to be first to describe and analyze their complete sets of genomic data, while still making prepublication data rapidly available for analysis by others in the field. A similar meeting in Amsterdam in 2008 extended these principles to proteomic data.

Participants in the Toronto International Data Release Workshop took the concept several steps further by endorsing the value of rapid data release for other biological data sets, including chemical structure, metabolomic and RNAi data, and annotated clinical resources, such as tissue banks, cohorts and case-control studies.

The Toronto Statement includes a set of suggested best practices for funding agencies, for journal editors and for scientists in their various roles, whether as data producers, data analysts/users or manuscript reviewers. Authors of the Opinion article in Nature include National Human Genome Research Institute researchers Eric Green, M.D., Ph.D., senior investigator in the Genome Technology Branch, who is a member of the writing group; and co-author Christopher Austin, M.D., director of the NIH Chemical Genomics Center.

To comment on the proposed data sharing principles and practices, go to Nature's online forum at: http://network.nature.com/groups/naturenewsandopinion/forum/topics/5433 [network.nature.com]