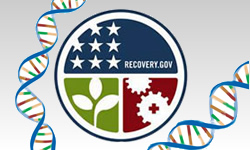 The National Human Genome Research Institute (NHGRI) has awarded more than $113 million provided by the American Recovery and Reinvestment Act. The new awards, added to NHGRI's regularly appropriated $367 million budget, will stimulate ground-breaking research ranging from studies aimed at understanding the human genome to those intended to lead to improvements in the prevention, diagnosis and treatment of human illness.

More than a dozen areas of genomic research will benefit from the investment of Recovery Act funds, which will create and retain high-quality jobs in the public and private sectors. The awards will accelerate the development of innovative technologies that can efficiently sequence an entire human genome for $1,000 or less; boost insights into the organization and function of the human genome; and promote the use of newer sequencing approaches to identify and understand the genetic roots of a number of diseases.

For its Recovery Act Signature Project, NHGRI selected the development of technologies that can sequence a human genome for $1,000 or less. NHGRI leadership thinks that truly inexpensive genomic sequencing will revolutionize health and medicine, and Recovery Act funding will accelerate the Institute's research program in this area.

The success of the Human Genome Project was made possible by significant reductions in DNA sequencing costs that were fueled in large part by tools, technologies and process improvements developed as a result of NHGRI funding. To continue its efforts to make sequencing a routine tool in both research and medicine, NHGRI subsequently launched two programs, in 2004, to further accelerate the development of sequencing technologies and reduce the cost of sequencing. The goal of the first program - to produce high-quality sequence of the amount of DNA found in a human genome for $100,000 - has already been achieved. Ultimately, NHGRI's vision is to cut the cost of sequencing of an individual's genome by another factor of 100, to $1,000 or less, which may enable sequencing to become a part of everyday medical care.

Under the Recovery Act, two-year awards have been made to seven investigator teams to develop revolutionary sequencing technologies. Each of the approaches incorporates many complementary elements that integrate biochemistry, chemistry, nanotechnology and physics with engineering to enhance the effort to develop breakthrough DNA sequencing and analysis technologies.

Award recipients and their approximate total funding over the next two years are:

Other Recovery Act awards focus on developing methods that will enable researchers to sequence regions of the genome that are difficult to sequence with current technologies. Certain regions of the human genome — some of which may play an important role in disease — are more challenging to sequence than others, probably because of their unique physical structure. Grant recipients and their approximate total funding over the next two years are:

The grantees and their approximate total funding over the next two years are:

Completely sequencing a human or other organism's genome is just one step in understanding that organism's biology. Researchers also need to understand the instructions encoded in the DNA sequence by identifying all of the functional elements in the genome. In addition to genes that code for proteins, these sequence-based elements include non-protein-coding genes; regulatory elements involved in the control of gene transcription; and DNA sequences that mediate the structure and dynamics of chromosomes.

NHGRI has awarded approximately $22 million of Recovery Act funds to support research aimed at identifying and understanding functional elements. This includes the ENCyclopedia Of DNA Elements (ENCODE) project, which is working to assemble a comprehensive catalog of functional elements in the human genome. A parallel effort, called modENCODE, will also receive support. modENCODE targets those same functional elements in two important models used in biomedical research: the roundworm and the fruit fly. Award recipients and their approximate total funding over the next two years, unless otherwise noted, are:

Understanding how and whether findings from genome-wide association studies vary according to environmental factors or geographic ancestry groups and applying the latest technology and analytical tools to well-characterized populations are important steps to fully realizing the benefits of population-based genomic research. NHGRI has awarded approximately $7.8 of Recovery Act funds to support innovative and collaborative research programs within its Office of Population Genomics, including:

More information about PAGE is available at www.pagestudy.org

More information about GENEVA is available at www.genevastudy.org.

More information about PhenX is available at www.phenx.org.

In addition to the awards in the above areas, other innovative and critical areas of genome research being supported through NHGRI's Recovery Act funds include: