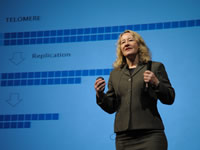 Nobel Prize winner, Carol Greider, Ph.D., presented the seventh annual Jeffrey M. Trent Lecture in Cancer Research on January 19 at NIH's Masur Auditorium. A capacity audience of more than 500 assembled, eager to hear the lecture that had been postponed twice last year- once due to President Barack Obama's inaugural NIH visit in September and again in December when Dr. Greider traveled to Stockholm, Sweden to attend the Nobel Prize ceremony.

Dr. Greider, the Daniel Nathans Professor and Director, Department of Molecular Biology and Medicine at Johns Hopkins Institute for Biomedical Sciences, won the 2009 Nobel Prize in Physiology or Medicine "for the discovery of how chromosomes are protected by telomeres and the enzyme telomerase." She shared the prize with Elizabeth H. Blackburn, Ph.D. from the University of California at San Francisco and Jack W. Szostak, Ph.D., from the Harvard Medical School, Massachusetts General Hospital, Boston; and the Howard Hughes Medical Institute.

"If you look at your program, you will note that the date of this lecture was Tuesday, September 29, 2009," said Dr. Green in his opening remarks, telling the audience about the first time he had to reschedule the lecture to a day in December 2009. "But, then Carol had to win the Nobel Prize. She explained she had to go to Sweden for the week. So, I understood when she called to say that we would have to postpone again."

Dr. Green then turned the podium over to NIH Chief of Staff, Kathy Hudson, Ph.D., to introduce Dr. Greider. Dr Hudson and Dr. Greider have been friends for 25 years. They met while attending graduate school at the University of California at Berkeley . Dr. Hudson shared photos and humorous stories of Greider from that period. To the crowd's delight, she also had pictures of the Nobel Prize ceremony, which she attended as a guest of Dr. Greider.

"When I told a friend at NIH that I was going to miss a meeting because I had to go to Stockholm, she said I have the best girlfriend story ever... my friend won the Nobel Prize," said Dr. Hudson.

Dr. Greider then took the podium. "It's always good to come somewhere and talk some science," she remarked, as she stepped from behind the podium to a spot on stage where she could be seen by the audience.

Dr. Greider began the lecture by recounting her days in Dr. Blackburn's laboratory at the University of California at Berkeley as a doctoral student. This is where she initially discovered and characterized the activity of the enzyme telomerase that maintains telomeres, from the ciliate Tetrahymena. Telomeres are repetitive stretches of DNA that protect and are located at the ends of chromosomes.

The Trent Lecture audience consisted of many young NIH researchers who could relate to Dr. Greider's scientific beginnings at the bench and relished her recent attainment of the Nobel Prize - a journey many researcher's would like to take.

In subsequent years, Dr. Greider described how as an investigator at Cold Spring Harbor Laboratory in the early 90's she worked with Dr. Calvin Harley to show that human telomeres shorten progressively in primary human cells. This work, combined with other telomere research being done at the time, illustrated the critical role of telomere length and its role in cell aging (senescence), cell death (apoptosis), and cancer.

In 1997, she moved her laboratory to The Johns Hopkins University of Medicine. At Hopkins, Dr. Greider's group continued to study the biochemistry of telomerase and determined the secondary structure of the human telomerase RNA. She also expanded her work on a mouse model of dyskeratosis congenita and stem cell failure in response to short telomeres. Dr. Greider currently studies both the biochemistry of telomeres and telomerase, as well as the cellular organismal consequences of short telomeres.

The progressive shortening of telomeres corresponds to DNA damage and age-related diseases. In addition to cancer, shortened telomeres can lead to liver disease, bone marrow failure and immunologic disorders.

Dr. Greider, while no doubt busy with lectures and other appearances due to the Nobel Prize, told the audience that she and her research team continue to work on understanding such disorders by attempting to find ways to re-establish telomere length. Her team is also studying what effects short telomere length when combined with environmental factors has on human health.

The remainder of the lecture outlined implications of telomere and telomerase research both for cancer cells, which undergo frequent replication, as well as for tissue-specific stem cells that may lead to therapies in the future. The lecture may be viewed online at:

Telomerase and the Consequences of Telomere Dysfunction.

In addition to the Nobel Prize, Dr. Greider has won numerous prestigious awards for her work on telomerase, including the Gairdner Foundation Award in 1998, the Albert Lasker Award for Basic Medical Research in 2006, and the Dickson Prize in Medicine in 2007. Over the past year, she also accepted the Paul Ehrlich and Ludwig Darmstaedter Prize and the Pearl Meister Greengard Prize.

About the Trent lecture: Dr. Trent was the National Human Genome Research Institute's (NHGRI) founding Scientific Director, serving in this role for more than nine years. His leadership and vision was instrumental in establishing NHGRI's Division of Intramural Research as one of the premier research programs in the world devoted to genetics and genomics. In recognition of his significant contributions to the research environment at NIH, NHGRI established the annual Jeffrey M. Trent Lectureship in Cancer Research in 2003. This lecture is given by a prominent cancer researcher who brings the kind of energy, creativity and enthusiasm to cancer research that Dr. Trent has exemplified throughout his career.