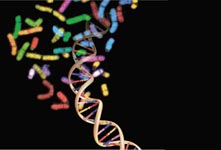 An international team led by researchers from the National Human Genome Research Institute (NHGRI) has discovered that certain variants in the Latrophilin 3 gene (LPHN3) act as a trigger for attention deficit hyperactivity disorder (ADHD).

The neuropsychological disorder is prevalent in the population, affecting 5 to 10 percent of U.S. children and adults - placing an enormous health burden on individual patients and society as a whole. The findings were published February 16 in the early online edition of the journal Molecular Psychiatry.

"It is gratifying to see how genomics research is revealing new insights about ADHD, a disorder with wide-reaching implications," said NHGRI Director Eric Green, M.D., Ph.D. "This study reflects some of the exciting progress in ADHD research that could one day lead to clinical benefits for those affected by the condition."

Variants in as many as hundreds of genes may predispose an individual to ADHD, though previous research has revealed the role of only a few genes. LPHN3 is involved in neuron signaling and is expressed in the brain's mesolimbic system, an area associated with behavioral response and ADHD.

The multi-phase collaborative study involved screening the DNA of individuals affected with ADHD and unaffected controls. In all, the researchers studied 6,360 people in 1,410 families, approximately half of whom are affected by ADHD.

This study illustrates how studying certain patient groups can help scientists learn more about the population at large. In the initial phase, the researchers studied multigenerational families from an isolated community in Antioquia, Colombia. People in this region, known as the Paisa population, have a relatively high prevalence of ADHD; data from 18 large Paisa families with ADHD symptoms were analyzed in the first stage of the study.

The study of Paisa families identified a specific region of the LPHN3 gene that was associated with symptoms of ADHD. Painstaking fine mapping of the DNA in this gene region more precisely pinpointed potential variants in the DNA code that may bealtering the gene's function. To validate their findings, the researchers then replicated the study in samples from Colombia, Germany, Norway, Spain and two U.S. populations.

"Our efforts revealed important functional sequences within the LPHN3 gene that may be important in neurologic health," said senior author Maximilian Muenke, M.D., chief of NHGRI's Medical Genetics Branch. "This study is a critical step to better understanding this disease and creates a new opportunity for developing novel and more personalized treatments for patients."

The research team also carried out microscopic studies of brain sections as well as brain imaging studies to show that a key LPHN3 variant of interest are expressed in brain regions related to attention and activity. The same variant associated with ADHD susceptibility is also associated with the response to stimulant medication.

"Our study partners and volunteers from around the world share in the important findings of this research," said lead author Mauricio Arcos-Burgos, M.D., Ph.D., associate investigator in NHGRI's Medical Genetics Branch. "Through replication of our first study in Columbia, we now have a clearer picture of the involvement of this gene and how inheritance of one form or the other can make a critical difference in terms of ADHD symptoms."

With respect to immediate recommendations for patients, Dr. Muenke said the new findings do not suggest that those with ADHD should seek a modification of their diagnosis or treatment, but notes that his group's findings open up new and important areas for active research.

ADHD's symptoms are associated with behavior and learning, and may affect a person's abilities that involve planning, memory, motor skills, social skills, control of emotions and response to discipline. Due to ADHD's genetic influences, there is a strong chance that someone diagnosed with the disorder will have a close relative with similar symptoms.

ADHD treatment typically involves a combination of behavior modification, educational interventions and medication. The most frequently prescribed drugs are stimulant medications. However, currently there is no way to tell in advance which medication will be most helpful for a particular individual, and finding the best possible treatment is often a trial-and-error process.