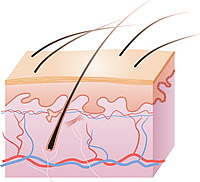 About 15 percent of infants and children and 2 percent of adults experience the red, itchy patches of skin caused by atopic dermatitis, or eczema. Dermatologists have a number of treatments to offer, but a study to sequence and analyze the genomes of the colonies of bacteria residing on human skin aims to take the guesswork out of which treatment is optimal for different patients.

The National Institutes of Health's Human Microbiome Project just awarded $42 million to expand eight disease-related investigations of the microbes living inside and on the surface of our bodies. The human microbiome comprises all the microorganisms-bacteria, fungi, viruses and other microbes-that live in or on the body. One project will study the microbiomes of the skin and nose in patients with atopic dermatitis and with immunodeficiency syndromes.

"Physicians do not yet have the biomarkers to tell them which patients are going to respond well to which treatments," Dr. Segre said. "That's what we're trying to develop; better biomarkers to then tailor treatments."

Part of Dr. Segre's study will sequence the entire genome of Staphylococcus, or Staph species of bacteria to better understand Staph infections, particularly drug resistant Staphylococcus epidermidis and Staphylococcus aureus. "Clinical management of these disorders requires better biomarkers to realize the therapeutic potential of manipulating the microbiome," Dr. Segre said. "Targeted therapies to maintain healthy skin might require not only inhibiting the growth of pathogenic bacteria, but also promoting the growth of symbiotic bacteria."

In her 10 years at NIH, Dr. Segre has studied how skin forms a barrier to the external environment and how it generates stress responses such as abrasions. She also has studied the genetic architecture for skin genes and how they function during development. More recently, she has begun to focus more on the bacteria living on the skin in terms of their contribution to interactions between genes and the environment occuring at the skin's surface. "Microbiome studies show the power of bridging genomics and clinical medicine to gain valuable insight into the human body as a complex super-organism," said Dr. Segre.

"The whole project is about eczema," Dr. Segre explained about her team's Human Microbiome Project grant, which in the first year will be approximately $1 million. "Eczema is a very common disorder. The bacteria associated with atopic dermatitis, or eczema, is Staph aureus. The reason we are studying the nose is that it is the reservoir for harboring Staph aureus. Even if you clear it off the skin it can reside in the nose."

For the study, patients with atopic dermatitis are seen in the clinic and two skin swab samples are taken; one for the Dr. Segre's microbiology lab and another that is sent to the NIH Intramural Sequencing Center. "We are studying the diversity of Staph living on a person's body normally and also during infection, " said Dr. Segre. "We are also trying to find genetic markers to see if the Staph that lives in one's nose is really what re-infects one's skin."

Dr. Segre added that the project has implications for the study of wound healing, which can be impaired under certain disease states, including in patients with diabetes. "Wound healing is clearly an interaction between skin cells and bacteria," she said. "Wounds can become infected. You have to manage the bacteria that populates the skin." The study also has implications for psoriasis and acne care, as well as for some rashes that occur as a result of cancer treatments.