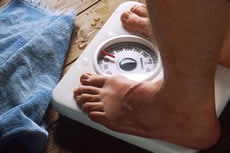 An international team of scientists, including researchers from the National Human Genome Research Institute's Molecular Genetics Section of Genome Technology Branch, have identified 13 regions of genetic variation associated with body fat distribution and 18 regions of genetic variation that are associated with increased susceptibility to obesity. The consortium, called the Genetic Investigation of Anthropometric Traits, or GIANT, describe the findings in two papers in the Oct. 10, 2010, advanced online publication of Nature Genetics.

Researchers previously associated the distribution of fat around one's midsection with an increased risk of type-2 diabetes and heart disease, whereas the storage of fat in the hip and thigh region has, in some studies, been shown to offer some protection from diabetes and high blood pressure. The researchers conducted a large genome-wide association study to identify DNA regions associated with fat deposits on the waist and hip, which are described as a waist-to-hip ratio. Of the 13 regions of genetic variation linked to body fat distribution, researchers showed that seven have much stronger effects in women than in men. The DNA regions explain around 1 percent of the variation in waist-to-hip ratios in the population. In addition, these regions of genetic variation are different than those associated with risk for obesity.

Body mass index (BMI) is a common measurement for determining obesity in adults, with a BMI of 30 or above placing a person in the obese range. In the second study, the researchers identified 18 new regions of genetic variation linked with BMI, adding to the 14 previously known DNA regions associated with obesity. Collectively, these regions provide a genetic explanation for 1.45 percent of BMI variation within the population. Individuals who inherit many of these regions of genetic variation are prone to weigh 15 to 20 pounds more than individuals who inherit a small number of these variations. This study drew upon data from more than 250,000 individuals.

The GIANT consortium is an international collaboration of more than 400 scientists from 280 research institutions. For more on these studies, see: