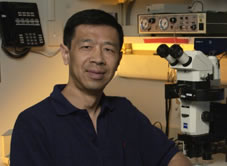 Dr. Liu, a tenured senior investigator, joined the National Institutes of Health (NIH) in 1993 as one of NHGRI's first intramural scientists when it was still an NIH center. Reflecting on his 18 years at NIH, Dr. Liu joked, "I am one of the dinosaurs in the Institute. I've never left because NIH really is the best place to do biomedical research. I enjoy it and I get paid for doing it."

A world expert in the onset, development and progression of leukemia, Dr. Liu leads the Oncogenesis and Development Section within NHGRI's Genetics and Molecular Biology Branch. Dr. Liu's section investigates how genetic changes in white blood cells, or leukocytes, lead to the development of leukemia, which strikes an estimated 43,000 Americans each year.

His laboratory has shown that some types of acute myeloid leukemia (AML) are caused by an inversion of chromosome 16 that brings parts of two genes together to form a harmful new fusion gene, called CBFB-MYH11. He uses animal models, including mouse and zebrafish, to study the function of the normal CBFB gene and other genes essential to blood cell development.

Recently, Dr. Liu's laboratory identified novel CBFB-MYH11 target genes during leukemia development using mouse models. His group has been able to identify and enrich leukemia stem cells, which are responsible for initiating leukemia and for relapse after treatments. Collaborating with the NIH Chemical Genomics Center, Dr. Liu's group screened a library of chemical compounds and is in the process of developing and testing novel anti-leukemia compounds in transgenic mouse AML models, which may lead to targeted leukemia treatments in the near future. Transgenic mice have the genes from another species transferred into their genome so that specific genetic traits can be studied in the resulting animal models of that trait or disease.

Dr. Liu's laboratory also investigates the genetic control of hematopoiesis, the process through which stem cells in the blood, called pluripotent hematopoietic stem cells, differentiate into all of the types of mature cells that circulate in the bloodstream. Leukemia is an example of hematopoiesis gone awry, and when it develops, the body produces large numbers of abnormal blood cells, or blasts. In acute leukemia, the blasts are too immature to carry out their normal functions, and symptoms of dysfunction appear rapidly.

Lately, Dr. Liu has played an increasing role in the overall research direction of the institute. He served one year as an acting branch chief, sat on the NIH Central Tenure Committee from 2004 to 2008 and, in 2006, became the chair of the NHGRI Promotion and Tenure Committee. He also has served on multiple search and mentoring committees. For the past four years, Dr. Liu has played a senior advisory role to NIH Deputy Director for Intramural Research Michael Gottesman, M.D.

"NIH will undoubtedly be affected by additional budget cuts and that will not be easy. I will work with Dr. Kastner to keep the NHGRI intramural program operating in a vital and productive fashion with minimal effects from budget cuts," he said.

Dr. Liu holds an M.D from the Capital Institute of Medicine, Beijing, and a Ph.D. in genetics from the University of Texas.