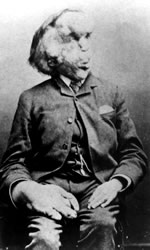 Exhibitions of live human curiosities had appeared in travelling fairs, circuses and taverns in England since the 1600s. These shows were still popular in 1862 when Joseph Carey Merrick, an apparently healthy baby, was born to Mary Jane and Joseph Merrick in Leicester, England. His parents attributed their son's development of lumpy, grayish skin in early childhood to his mother being knocked over by a fairground elephant while she was pregnant. Despite increasing physical deformities, including the development of a bony lump on his forehead, Joseph had a relatively normal childhood. He attended school and had a close relationship with his mother until age 11 when she died of bronchial pneumonia.

The next year, his father remarried and Merrick left school to begin working. He rolled cigars for a few years until his right hand deformity worsened. He tried to sell items from his father's haberdashery shop, door to door, but was unsuccessful because customers couldn't understand his speech and were frightened of him. At 17, he left home for the Leicester Union Workhouse after his father beat him for failing to earn enough money. He loathed the workhouse and, after four years, escaped it to work in the world of human oddities where he was exhibited as, "Half-a-Man and Half-an-Elephant." In 1884, he moved to London where he was displayed at a shop on Whitechapel Road directly across from the London Hospital.

Physicians and surgeons visited Merrick at the shop, including Surgeon Frederick Treves who invited him to the hospital for an exam. Treves measured Merrick's head circumference at 36 inches, his right wrist at 12 inches and one of his fingers at 5 inches in circumference. He noted that his skin was covered in warty growths, the largest of which exuded an unpleasant smell. Apart from his deformities and the lameness in his hip, Treves concluded that Merrick was in generally good health. Treves presented Merrick at a meeting of the Pathological Society of London but Merrick declined further exams and presentations because they made him feel "like an animal in a cattle market."

By 1885, freak shows had fallen out of favor in Victorian England and police closed the 'Elephant Man' exhibit. Merrick's managers sent him to tour in Europe where he was robbed, beaten and abandoned. He eventually made his way back to London in 1886; unable to communicate, police found Treves' business card on him. Treves came and took Merrick to the London Hospital.

Francis Carr Gomm, chairman of the hospital committee, supported Treves in his decision to admit Merrick whose physical condition had deteriorated over the previous two years. However, the hospital was not equipped to care for "incurables." When Carr Gomm approached other institutions and hospitals, they refused to accept Merrick. In an unusual letter to The Times newspaper, Carr Gomm outlined Merrick's case, which resulted in an outpouring of public support. With the financial backing of many donors, Carr Gomm was able to convince the hospital committee to provide Merrick a home in the hospital for the remainder of his life.

Merrick's case attracted the notice of London's high society, including a visit from the Princess of Wales Alexandra. With the help of his supporters, Merrick was able to fulfill long-held desires to visit the theater and to vacation several times in the country. He spent his time writing prose, poetry and creating an intricate church built out of playing cards. An avid letter writer, Merrick often ended his letters with a poem, "False Greatness" by Isaac Watts:

'Tis true my form is something odd,
But blaming me is blaming God;
Could I create myself anew
I would not fail in pleasing you.

If I could reach from pole to pole
Or grasp the ocean with a span,
I would be measured by the soul;
The mind's the standard of the man.

Merrick's condition gradually deteriorated during his four years at the London hospital. He required a great deal of care from the nursing staff and spent much of his time in bed, or sitting in his quarters, with diminishing energy. His facial deformities continued to grow and his head became even more enlarged. He died on April 11, 1890, at the age of 27 from asphyxia, caused by the weight of his head as he lay down.