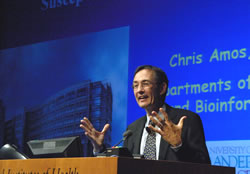 Though difficult to imagine today, the knowledge of lung cancer risk from exposure to tobacco didn't evolve until after World War II — a period when U.S. military rations included cigarettes. Soon after, scientists began to pick up the trail of killer tobacco with epidemiologic studies, comparing groups of smokers and non-smokers. They noted that individual susceptibility appeared to be a factor in cancer and addiction and, in the 1980s, produced the first evidence linking genetic factors to human lung cancer risk.

Christopher I. Amos, Ph.D., professor of epidemiology and biomathematics at the University of Texas M.D. Anderson Cancer Center, took the Masur Auditorium podium on the National Institutes of Health Bethesda campus on Sept. 7, 2011, to describe the evolution of our current understanding of the complex genetic and environmental relationship between smoking tobacco and lung cancer risk. His talk was the ninth annual Jeffery M. Trent Lectureship in Cancer Research, organized by the National Human Genome Research Institute (NHGRI) Division of Intramural Research.

The Trent Lectureship features a prominent cancer researcher in a lecture named for the founder of the NHGRI intramural program. Dr. Amos leads the coordinating center for a collaborative group called the Genetic Epidemiology of Lung Cancer Consortium.

Researchers like Dr. Amos classify a smoker as a person who lights up 100 or more times. Citing the work of Laura Beirut at Washington University in St. Louis, Dr. Amos said that among people who have smoked more than 100 cigarettes, 80 percent develop a tobacco dependency, while 20 percent do not.

Research in this area has advanced over recent decades. Initial studies in the early 1960s identified an increased risk for lung cancer among relatives of lung cancer patients, but these were not confirmed until the 1980s, when researchers presented evidence linking genetic factors to lung cancer risk. The first genetic epidemiologic study on lung cancer considered individual risk rather than classifying the population as a vast group. Then, in 1986, NHGRI senior investigator Joan Bailey-Wilson, Ph.D. and collaborators, showed that lung cancer was more prevalent in some families even after adjusting for cigarette smoking.

In 1990, Dr. Bailey-Wilson's group found statistical evidence that a specific genetic factor increases a person's risk of lung cancer. In 2004, Dr. Bailey-Wilson and collaborators, including Dr. Amos and other members of the Genetic Epidemiology Consortium, identified the first lung cancer region in the human genome that increases lung cancer risk. In 2008, Dr. Amos led a group that identified common risk alleles for lung cancer on chromosome 15q, which has led to many other studies of both lung cancer risk and nicotine dependence genes in this chromosomal region. Alleles are the alternate gene forms an individual inherits from each parent that, in this case, put them at higher risk for lung cancer.

The American public almost universally understands the dangers of smoking. Researchers in Dr. Amos's field of genetic epidemiology continue to gain understanding of lung cancer and the ongoing public health concern it presents. Using linkage analysis — tracking a trait in families and linking genetic factors to the trait — they can find high-risk alleles (genes inherited in alternate forms). By performing large genome-wide association studies that scan many different individuals' genomes for a genetic marker that can predict disease, they can find common, low risk alleles. A person with multiple risk alleles in different disease genes has a higher probability of developing cancer.

Dr. Amos described an increasing sophistication in the questions that researchers are asking and showed that these questions are leading to answers — and more questions. For instance, they have found that African-American males who smoke the same amount as Caucasian males have a 30 percent higher risk for lung cancer. Hispanic groups have a lower risk than Caucasians. Dr. Amos explained that complex genetic and environmental factors may contribute to these differences.

One of the major reasons that Dr. Amos collaborates so widely in his research is because he has to study large numbers of people. For the linkage studies designed to find high risk alleles, he requires samples from those with a diagnosis of lung cancer and their family members. Unfortunately, lung cancer often kills potential study participants before they can participate. So, large consortia are a key to genetic epidemiology in this disease to find families with enough living members.

Researchers are studying the role of nicotine, a chemical compound found in tobacco, in both the cause of dependency and spread of cancer. Dr. Amos led a team that associated variations in nicotinic acetylcholine receptors on chromosome 15q with an increased risk for lung cancer. Nicotinic receptors are protein molecules on the surface of the cell that recognize and are sensitive to nicotine. Other researchers have confirmed this finding along with an association of these receptors with smoking behaviors. Dr. Amos discussed the finding that nicotinic receptors are expressed at high levels in the lungs' bronchial epithelial cells, which may explain why nicotine plays a role in cancer proliferation.

One common gene variant in the nicotinic acetylcholine receptor locus on chromosome 15q that is thought to have a comparatively great impact in causing cancer has been called Mr. Big by researchers, or rs16969968. As the researchers bear down on Mr. Big, additional questions arise:

The future of lung cancer research lies in trans-disciplinary research groups that can approach questions of the genetics of lung cancer risk and smoking from different directions, Dr. Amos said. At the top of his own research goals is screening high-risk populations for their risk for lung cancer in order to help them make important life choices — especially to avoid smoking.

Dr. Amos received his Ph.D. in biometry and genetics at Louisiana State University under the direction of Robert Elston, Ph.D. and current NHGRI senior investigators Joan Bailey-Wilson, Ph.D., and Alec Wilson, Ph.D. He subsequently received postdoctoral training at the National Cancer Institute and National Institute of Arthritis and Musculoskeletal and Skin Diseases. He has been on the faculty at the University of Texas MD Anderson Cancer Center since 1993. He is a past president of the International Genetic Epidemiologic Society, and is the recipient of numerous honors, including the Leadership Award of the International Genetic Epidemiologic Society and the Margaret and James A. Elkins Jr. Faculty Achievement Award of the UT MD Anderson Cancer Center.