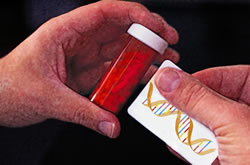 At some point, most of us rely on prescription drugs to treat or cure a symptom or condition, but few of us realize what's involved in drug development.

It currently takes around 12 years and $1.2 billion to develop a new drug and bring it to market, according to the U.S. Food and Drug Administration (FDA), which monitors and regulates new drug development. What's more, only one in 10,000 new chemicals makes it all the way through the development pipeline. The August Genome Advance of the Month spotlights two studies by Stanford University's Atul Butte, M.D., Ph.D., that repurposed old drugs as new treatments for lung cancer and inflammatory bowel disease.

Dr. Butte and his group relied on the databases at the National Center for Biotechnology Information (NCBI) Gene Expression Omnibus, and the Connectivity Map maintained by the Broad Institute of MIT and Harvard. Both databases maintain gene expression profiles — experiments that measure which genes are being turned on or turned off in a particular cell or tissue.

If a disease and a drug both had similar profiles — that is, if they both caused the same genes to turn on and off — then they were a bad match. In fact, the drug might worsen the disease. But when the profiles were opposite — the drug turned off genes that the disease activated and vice versa — then that drug might be used to treat that disease.

Next, researchers looked at cimetidine, commonly known as Tagamet, which is used to treat stomach ulcers. Sir James Black won the 1988 Nobel Prize in Medicine for discovering this drug, considered by many to be the first pharmaceutical blockbuster. The gene expression profile for cimetidine indicated that it might be useful in the treatment of lung cancer. In fact, cimetidine received a better score than gefitinib, a drug now commonly used to treat lung cancer. The group then proved the treatments might work through a series of experiments in cultured human cells and mice.

Physicians are not yet rushing to prescribe cimetidine for lung cancer or topiramate for ulcerative colitis and Crohn's disease — these uses still require confirmation in the lab and in clinical trials. But Dr. Butte's studies, published in the journal Science Translational Medicine, at the very least, validate this approach to repurposing established drugs. And, with this new drug development approach, who knows what the future will bring?