Dissecting the cause of the Black Death

Dissecting the cause of the Black Death 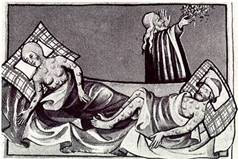 At the end of October, a group of scientists from Canada, Germany, and the United States published a paper that marries the fields of genomics, public health and archeology.

Led by Johannes Krause at the University of Tübingen, Germany, and Hendrik Poinder of McMaster University in Canada, the team reported they were able to sequence the full genome of the bacteria responsible for the Black Death, a plague that swept through Europe from 1347-1351, killing anywhere between 30 and 50 percent of the population.

The findings resulted from DNA extracted from several teeth recovered from a plague pit in London. Victims in London piled up so quickly in the 14th century - some 200 a day at the plague's height - that church officials organized mass graves, or plague pits. DNA used in this study came from East Smithfield in the heart of London's financial district - now actually under the old Royal Mint building.

The techniques available for sequencing DNA are now so sensitive that it's possible to analyze DNA from ancient samples, as long as there's recoverable DNA present. Known as paleogenomics, work in the area got started in a quest to uncover the secrets of Egyptian mummies and has since been used on samples from prehistory, notably the wooly mammoth and, more recently, the Neanderthal. Those samples were tens of thousands of years old, whereas, in this case the teeth from which the bacterial DNA was recovered only dated back about 660 years. However, it's more difficult to reconstruct the sequence of an ancient bacterial genome than a mammal, as bacterial genomes are much smaller, and contamination from soil bacteria is harder to filter out.

Determining the exact cause of a plague that happened nearly 700 years ago is something that's only recently become possible since the advent of genomics - and especially the development of NextGen technologies that do not rely on DNA amplification with polymerase chain reaction techniques that can increase contamination. For some time, researchers thought that the plague was caused by a bacterium called Yersinia pestis, but y. pestis is still with us, and although it causes bubonic and pneumonic plagues, such outbreaks don't have nearly the same severity (or even the same range of symptoms) as the Black Death, leading to growing doubts among some historians and scientists as to the true pathogenic culprit. Historians have been able to chart the course of the disease through historical records; the contemporary accounts of symptoms, giving us an idea of a victim's fate once infected; and the burial records, which give us an idea of the speed of transmission from town to town and the high mortality rates once the plague arrived.

Armed with the genome sequence for Y. pestis recovered from the plague pit, the researchers were able to use it along with genome sequences of current Y. pestis strains to create a phylogenetic tree, mapping the evolution of the pathogen from then until now. The analysis puts the Black Death Y. pestis near the root of this evolutionary tree, suggesting that Black Death was the first widespread encounter that humans had with this bug.

Comparative analysis of this ancient version of Y. pestis with current strains showed that there are few genomic clues as to why it was so much deadlier in the 14th century, as there has been surprisingly little change to the bacteria's genetic code. Instead, the authors suggest that the terrible toll of the Black Death was probably due to a number of other factors. The poor hygiene and public health of the time was probably a factor, as well as the genetic makeup of the population. It's likely that many of these victims had greater susceptibility to the disease, and their deaths increased the proportion of the population who were best able to resist, possibly explaining why more recent outbreaks have not been nearly as terrifying.

And lest this seem like an academic study of some historical event, it's not. Other researchers recently reported that a strain of Escherichia coli that caused a particularly nasty outbreak of foodborne illness in Germany earlier this year contained DNA sequences from the original plague bacteria. Bits of the Black Death may still lurk about, waiting to make us sick.