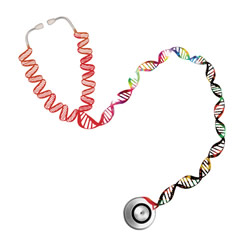 Bethesda, Md., Tues., Dec. 6, 2011 — A new funding plan by the National Human Genome Research Institute (NHGRI) sharpens the focus of its flagship Genome Sequencing Program on medical applications. In addition to continuing on-going studies, the four-year, $416 million plan launches new efforts to find causes of rare inherited diseases and accelerate the use of genome sequence information in the medical care of patients.

Since 1996, NHGRI has supported a large-scale production sequencing program, primarily involving groups at The Broad Institute, Cambridge, Mass.; The Genome Institute at Washington University, St. Louis; and the Human Genome Sequencing Center at Baylor College of Medicine, Houston. These three centers generated most of the U.S. sequence contribution to the Human Genome Project, which ended in 2003. Since then, they have produced large amounts of genomic data for numerous studies, including the 1000 Genomes Project, a study of human genetic variation, and The Cancer Genome Atlas, an NHGRI partnership with the National Cancer Institute (NCI) to identify genomic changes involved in cancer. The centers' research has also provided a test bed for the technological advances that drove down the cost of genome sequencing to a point where its use in medical care may become practical. Like NCI, NHGRI is part of the National Institutes of Health.

"In the strategic plan published earlier this year, we described NHGRI's vision for fulfilling the promise of genomics to advance human health," said NHGRI Director Eric D. Green, M.D., Ph.D. "The vision builds on the success of the Human Genome Project and of the genomic studies that have been pursued since its completion; it charts a course to accelerate the application of genomics to medical care. With the investments made over the last decade, and the new ones that we are now announcing, we believe we are moving along the path towards the realization of genomic medicine."

The Genome Sequencing Program's new funding will be distributed over four years starting in fiscal year 2012. The largest share of the program — initially $86 million a year — will go to the large genome sequencing centers at the Broad Institute, Washington University and Baylor College of Medicine.

The funding will support each center's ongoing basic research into how the human genome works; studies on the genetic contributions to common complex illnesses, such as diabetes and heart disease; and ongoing special projects, such as The Cancer Genome Atlas. The centers will also be involved in new medical initiatives, and will continue to implement technological advances in DNA sequencing and information management systems; develop new techniques and software to analyze and understand the massive amounts of DNA sequence data now being produced; and continue to train genomic researchers and technicians.

"NHGRI relies on the large-scale centers to be its sequencing production and intellectual powerhouses," said Adam Felsenfeld, Ph.D., program director for NHGRI's Genome Sequencing Program in the Division of Extramural Research. "They carried the heaviest workloads for NIH during the Human Genome Project, and they have become world leaders in genomics. We look forward to their continued contributions to increasing the value of genome sequencing for both biology and biomedicine."

NHGRI will fund the three centers as follows:

NHGRI plans a gradual reduction in the base funding for the large-scale centers over the next several years as the cost of sequencing continues to drop. The savings will be repurposed as new research opportunities arise.

An estimated 25 million Americans suffer from an inherited disease; most of these are considered rare, afflicting fewer than 200,000 people. Some are well-known, such as cystic fibrosis and muscular dystrophy, but many more are so rare that they affect only a few dozen families. Of the more than 6,000 rare diseases, researchers have found the genetic cause for fewer than half, and of these, merely one-tenth have treatments.

Doctors call these diseases Mendelian disorders because they tend to be caused by a mutation in a single gene and are inherited in a pattern first identified by the 19th century Augustinian friar Gregor Mendel.

Recent advances in genome sequencing offer the hope that many, if not most, of the genes responsible for these illnesses can be identified through focused research efforts. NHGRI will partner with the National Heart, Lung and Blood Institute (NHLBI) to invest $48 million over the next four years to rapidly and systematically find the genetic underpinnings of these illnesses.

NHGRI will provide $40 million and NHLBI $8 million to fund three centers, as follows:

The three centers will collaborate with a worldwide network of rare disease experts to sequence the genomes of thousands of patients and their family members to identify the genetic variants responsible for the disorders.

"We expect that the knowledge about genetic variants that underlie Mendelian disorders will facilitate rapid and accurate diagnosis and might lead to new therapeutic approaches," said Lu Wang, Ph.D., NHGRI program director for the Mendelian Disorders Genome Centers Program. "This knowledge can also shed light on more common, complex diseases that involve similar genes, pathways and phenotypes, and contribute to the understanding of basic human genetics."

To jumpstart these projects, the centers already have solicited thousands of samples from researchers studying several hundred rare disorders. The centers will continue to solicit samples and maintain a public list of available materials. The University of Washington will serve as the coordinating center for the program.

The centers also plan to join the International Rare Disease Research Consortium, whose goal is to develop diagnoses of most rare diseases and treatments for about 200 disorders by 2020.

To help speed up the application of genomic science to medical care, NHGRI will invest $40 million over four years to support five Clinical Sequencing Exploratory Research Projects, in which new multi-disciplinary research teams will explore the ways in which healthcare professionals may use genome sequencing information in a medical care setting. Physicians, ethicists, genomic scientists, patients and families will work together to learn important lessons about the use of genome sequencing in medical care and to develop methods to improve its use in the future.

"At NHGRI, we foresee genome sequencing becoming a routine part of medical care. We regularly now hear anecdotal accounts of people who have already made remarkable recoveries from illness thanks to applications of genomic medicine, especially for some types of cancer and acute diseases," said Brad Ozenberger, Ph.D., NHGRI's program director for Genomic Medicine, who is overseeing the new initiative with Jean McEwen, J.D., Ph.D., program director for the Ethical, Legal, and Social Implications Program. "These projects are exploring the best ways to widen the use of genomic medicine in an effective, responsible, respectful way."

Clinical Exploratory Research Projects will answer questions such as how to incorporate genomic data into medical records, what tools are needed to extract relevant information from a patient's genome sequence, and how the availability of genome sequence data affects a physician's recommendations regarding treatment.

The research will include important ethical and psycho-social elements, such as how patients should be counseled and educated before having their genome analyzed, the best way to acquire patient consent to participate in a study, and when to return findings to patients that are not related to the primary medical condition for which the test was done. The program will also provide a forum for the development and dissemination of innovative and best practices for clinical genome sequencing.

The funded projects are:

The National Cancer Institute will contribute an additional $2 million a year for four years to the program, specifically supporting research at the University of Washington and Baylor College of Medicine, which are primarily focused on clinical research questions relevant to cancer patients. The NCI contribution will allow NHGRI to shift funding to additional research under this program.

The final component of the new Genome Sequencing Program focuses on the need to create robust, well-documented and well-supported computer software programs that can be used by investigators outside of large centers to analyze genome sequence data. As the falling cost of DNA sequencing technology has increasingly allowed small laboratories to own and operate their own instruments, it has become clear that data analysis is now the major challenge for the field. Many sequence analysis tools have been developed, but their use is too often limited because they require sophisticated or expert skills to install and use.

NHGRI will invest nearly $20 million over four years to fund the further development of existing software to make it more generally accessible and to accelerate the ability of investigators to analyze genome sequence data. For this program, the institute will use various funding mechanisms, including cooperative agreements and Small Business Innovation Research grants. These awards will be made early in 2012.

NHGRI is one of the 27 institutes and centers at NIH. The NHGRI Division of Extramural Research supports grants for research and training and career development at sites nationwide. Additional information about NHGRI can be found at www.genome.gov.

About the National Institutes of Health (NIH): NIH, the nation's medical research agency, includes 27 Institutes and Centers and is a component of the U.S. Department of Health and Human Services. NIH is the primary federal agency conducting and supporting basic, clinical, and translational medical research, and is investigating the causes, treatments, and cures for both common and rare diseases. For more information about NIH and its programs, visit www.nih.gov. NIH...Turning Discovery into Health