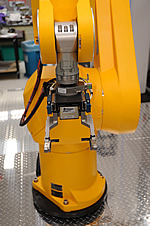 Bethesda, Md., Wed., Dec. 7, 2011 — A high-speed robotic screening system, aimed at protecting human health by improving how chemicals are tested in the United States, begins today to test 10,000 compounds for potential toxicity. The compounds cover a wide variety of classifications, and include consumer products, food additives, chemicals found in industrial processes, and human and veterinary drugs. A complete list of the compounds is publicly available at www.epa.gov/ncct/dsstox.

Testing this 10,000 compound library begins a new phase of an ongoing collaboration between the National Institutes of Health (NIH), the U.S. Environmental Protection Agency (EPA), and the U.S. Food and Drug Administration (FDA), referred to as Tox21. NIH partners include the National Toxicology Program (NTP), administered by the National Institute of Environmental Health Sciences (NIEHS), and the NIH Chemical Genomics Center (NCGC), part of the NIH Center for Translational Therapeutics (NCTT), housed at the National Human Genome Research Institute (NHGRI).

"There has never been a compound library like this before," said NIEHS/NTP Director Linda Birnbaum, Ph.D.

Birnbaum is especially excited that some of the compounds the NTP has brought forward for testing are mixtures of chemicals. "All of us are exposed to many different chemicals at the same time, not just one chemical at a time," she said. "These new technologies allow us to more rapidly advance our understanding of not only individual chemicals, but mixtures of chemicals as well."

A subset of the NTP portion of the 10,000 compound library will focus on pilot testing several formulations or mixtures of compounds, a priority area for NIEHS/NTP. The library constituents were selected after a thorough analysis of existing scientific studies, more than 200 public chemical databases, and chemical nominations received from internal and external partners. Each test compound will undergo a thorough chemical analysis to verify its identity and determine its purity, concentration and stability.

The goal of the testing is to provide results that will be useful for evaluating if these chemicals have the potential to disrupt processes in the human body to an extent that leads to adverse health effects.

The compounds will be tested in the Tox21 robotic screening system at the NCGC in Rockville, Md. The Tox21 robot, unveiled earlier this year, was purchased with funds provided by the NTP as part of its contribution to the Tox21 partnership.

"The robot has undergone rigorous testing since it was installed and unveiled earlier this year. It's ready to start testing this large compound library," said NHGRI Director Eric Green, M.D., Ph.D. "This is a milestone for Tox21, because it will allow us to test chemicals at a rate previously impossible for anyone to do by hand."

"We are happy to contribute NCGC's pharmaceutical collection of approximately 3,500 compounds of approved and investigational drugs as part of the Tox21 program," said NCTT Scientific Director Christopher Austin, M.D. "Drug toxicity is one of the primary reasons that the development of new drugs fails and approved drugs are removed from the market, and the ability to better predict toxicity would improve the efficiency of drug development enormously."

The EPA seeks to understand the molecular basis of such chemicals to better protect human health and that of the environment.

"The Tox21 partnership integrates revolutionary advances in molecular biology, chemistry, and computer science, to quickly and cost-effectively screen the thousands of chemicals in use today," said Paul Anastas, Ph.D., assistant administrator of the EPA Office of Research and Development. "The innovative robotics screening technology will generate chemical toxicity data that EPA has never had before."

The FDA, also a partner in Tox21, emphasizes the value of this effort for the public.

"The Tox21 rapid assessment of drug toxicity can become a powerful safety tool for protecting the American public. It also has the potential to help bring innovative drugs to market by allowing drug developers to identify unsafe candidate drugs early," said Janet Woodcock, M.D., director of the FDA Center for Drug Evaluation and Research.

All testing results will be available to the public through NIH and EPA chemical toxicity databases. In addition, NCTT has created a Tox21 chemical inventory browser freely available at http://tripod.nih.gov/tox21chem to provide researchers with additional about the chemicals. For more information about Tox21, visit http://www.niehs.nih.gov/health/assets/docs_p_z/ntp-tox21.pdf.

For B-Roll clips from the NCGC facility and a time lapse sequence of the robot being built, see Tox21 Collaboration: Robot B-Roll.

The NIEHS supports research to understand the effects of the environment on human health and is part of NIH. For more information on environmental health topics, visit www.niehs.nih.gov. Subscribe to one or more of the NIEHS news lists (www.niehs.nih.gov/news/releases/newslist/index.cfm) to stay current on NIEHS news, press releases, grant opportunities, training, events and publications.

The NTP is an interagency program established in 1978. The program was created as a cooperative effort to coordinate toxicology testing programs within the federal government, strengthen the science base in toxicology, develop and validate improved testing methods, and provide information about potentially toxic chemicals to health, regulatory, and research agencies, scientific and medical communities, and the public.

The NTP is headquartered at the NIEHS. For more information about the NTP, visit http://ntp.niehs.nih.gov.

The National Human Genome Research Institute is part of the National Institutes of Health. For more about NHGRI, visit www.genome.gov.