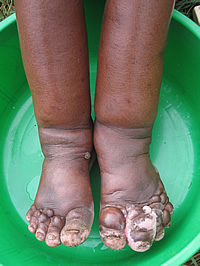 Farmers in the highlands of southern Ethiopia scratch out a subsistence living from the region's volcanic red clay. The soil supports the farms, but fine-grained, volcanic rock particles in the dirt threaten the farmers and their families. Continual exposure of bare feet to the volcanic soil causes 1 in 20 people to develop a painful inflammation of the lower extremities that, over time, leads to foot disfigurement. Doctors call it podoconiosis. The locals call it mossy foot. And those affected suffer social stigma as well as debilitating discomfort.

Now, researchers think they know why some 4 million people in at least 10 countries worldwide develop this incapacitating condition. One-fifth carry genetic variants that cause their immune system to react to the volcanic dust. This disease-producing response, triggered by exposure from the lack of shoes, provides a dramatic example of the interaction between genes and the environment.

Writing in the March 29, 2012 New England Journal of Medicine, an international team that includes researchers from the National Human Genome Research Institute (NHGRI), part of the National Institutes of Health (NIH), describes the genetic link that turns dirt into a toxin.

"This study draws attention to a neglected tropical disease with a devastating impact on poor people and their communities," said NHGRI Scientific Director Dan Kastner, M.D., Ph.D. "It demonstrates the global reach of genomics research into the lives of people in parts of the world where endemic diseases very often go unchecked." 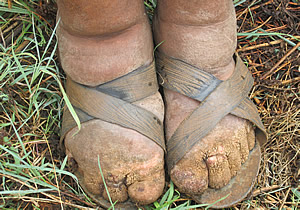 Doctors have known for a long time that podoconiosis runs in families and that continual exposure to volcanic soil triggers it. Wearing shoes and socks, or even washing off the dirt, prevents the condition. But doctors have been perplexed that only some people develop the disease, while others with the same environmental exposure are spared.

To sort this out, the international collaborators conducted a genome-wide association study-or GWAS-analyzing DNA from 194 volunteers from the Ethiopian highlands affected by podoconiosis, along with DNA from another 203 unaffected individuals from the same region. The researchers collaborated with field workers from the non-profit Mossy Foot Treatment and Prevention Association in southern Ethiopia to collect the data and samples.

The researchers generated a dataset from study-participant DNA, screening more than 550,000 single-nucleotide polymorphisms (SNPs), which are sites in an individual's DNA that contain a different chemical base when compared to a standard reference human genome sequence. They found significant podoconiosis association for eight SNPs within or nearby a stretch of DNA on chromosome 6, called the HLA class II locus.

The researchers performed a second validation step, called a family-based association study, using DNA samples from 202 sets of child-parent trios from affected families. The researchers detected six SNPs that showed significant association-those that mapped to HLA class II region genes and most strongly associated with podoconiosis in the GWAS, validating the GWAS results.

Further analysis of direct HLA tests of 94 affected persons and 94 controls confirmed that podoconiosis susceptibility is increased by inheriting altered DNA in the HLA class II locus from one or both parents. The researchers estimated that the SNPs found through the GWAS-which alone comprise a portion of the genetic factors in podoconiosis-­­ explained about 16 percent of the variance in the disease occurrence. They also found that individuals with those gene variants were 2 to 3 times as likely to become affected if exposed to the volcanic rock soil.

"This is the first study of a non-communicable disease to have used genome-wide association for any African population, and it is the first study that has attempted to use a systematic genomic approach to shed light on the genetic basis of podoconiosis," said Charles Rotimi, Ph.D., co-author and senior investigator in NHGRI's Inherited Disease Research Branch and director of the trans-NIH Center for Research on Genomics and Global Health (CRGGH).

The HLA class II locus is also particularly associated with T cell-mediated immunity, according to co-author Adebowale Adeyemo, M.D., NHGRI staff scientist and CRGGH deputy director. The research findings point to the fact that podoconiosis is likely to be a T cell-mediated inflammatory disease. Mineral particles are absorbed through the skin of the foot and build up in the lymphatic system, causing inflammation and scarring that can obstruct blood vessels in an affected individual's feet.

"We found a result that is consistent with the clinical observations of inflammation and provides a way forward for scientific study of the disease," Adeyemo said. "Our hope is that other studies will follow, including a gene expression and immunology study, and a study of the soil."

Fasil Tekola Ayele, Ph.D., the study's lead author and a CRGGH post-doctoral fellow, coordinated the field work in the Ethiopian villages, where he said it is very common to see people with podoconiosis. "It may even be more prevalent than other diseases, like HIV, tuberculosis and malaria," he said.

"One aspect that makes podoconiosis disturbing is that it is almost 100 percent preventable by wearing shoes. So it is a disease of poverty to a very large extent," Dr. Rotimi said. Public health campaigns are underway to encourage use of footwear in endemic areas. Philanthropic groups distribute free shoes for children in impacted communities and make shoes to fit affected adults.

Depending on the stage, podoconiosis can be reversible to a large extent with basic foot hygiene that includes regularly washing off the dirt and wearing shoes and socks. "At the later stage, surgery may be the only remedy," Dr. Adeyemo said. "In time, it becomes a very hopeless situation." Doctors can surgically remove prominent skin nodules, but ongoing exposure to the soil can lead to recurrence that is sometimes worse for the person with podoconiosis.

Researchers in NHGRI's Social and Behavioral Research Branch (SBRB) are among groups engaged in research to learn about the social and behavioral factors that perpetuate the disease. SBRB and its collaborators are launching a study of public health interventions, including measuring the effectiveness of intervention strategies and messages that promote foot health, including foot hygiene and shoe use.

In addition to the NIH researchers who conducted the GWAS, the study team included members from the Brighton and Sussex Medical School and the Clinical Transplantation Laboratory in the United Kingdom and the Armauer Hansen Research Institute in Addis Ababa, Ethiopia. Part of the team led by senior authors Gail Davey, M.D., and Melanie Newport, M.D, Ph.D., of the Brighton and Sussex Medical School, conducted preliminary epidemiology work in the Ethiopian highlands and also had developed a clinical staging system for people with the condition-from early to late stages.

In addition to his role at CRGGH, Dr. Rotimi is president of the African Society of Human Genetics. He considers this study of podoconiosis to be a step toward addressing health disparities. "So far, 95 percent of what has been done in GWAS research has been on European populations and some Asian populations," Dr. Rotimi said. "This study is a wonderful example of the mission of CRGGH, including training African scientists, applying state-of-the-art science and answering questions about diseases that would otherwise not be dealt with."