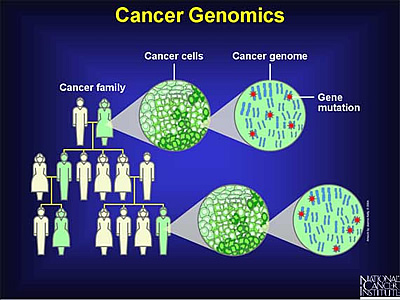 Extensive research in the 40 years since the passage of the National Cancer Act has revealed some of the immense complexity of cancer. Now we know that what has been known collectively as "cancer" is actually comprised of hundreds of different diseases. The traditional classification of cancer by its appearance or organ of origin (e.g. cancer of the lung, breast or colon) is giving way to a molecular and genetic understanding of these diseases. Three studies published this month highlight the extraordinary potential of genomics in illuminating the genetic and epigenetic changes that induce a normal cell to become cancerous, and in guiding the development of more effective diagnostics and treatments.

Fundamentally, cancer is characterized by alterations in gene expression. This can result from mutations — or changes — in a single cell's genomic DNA; the mutations alter gene expression within the cell, allowing it to divide uncontrollably and spread within the body. These mutations may be inherited but are more commonly acquired spontaneously from errors in DNA replication, chronic infection with some types of viruses as well as environmental factors and lifestyle choices, including exposure to certain chemicals or UV light. Consequently, each tumor's genome represents a rich and comprehensive archeological record of all the mutations accumulated by the cancer cells over the lifetime of the patient. These records can then be mined for information on the causative origin and development of the tumor.

In a landmark collaborative effort published in Nature, research teams from the Molecular Taxonomy of Breast Cancer International Consortium (METABRIC), located primarily in the United Kingdom and Canada, surveyed the genomic landscape of breast cancer. They did this by examining samples from almost 2000 patients, with long-term clinical follow-up. The unprecedented statistical power of such a large data set provided researchers the opportunity to search for effects of both inherited and acquired DNA alterations on the breast cancer transcriptome — a snapshot of all the genes being actively expressed in the cancer.

Using this information, the researchers identified several novel gene mutations, as well as relationships between cancer genes and signaling pathways that control growth or other functions within the cell. These data shed light on how specific mutations may be involved in the development and progression of breast cancer.

Significantly, they also uncovered 10 distinct subgroups of breast cancer, representing different diseases, which link certain genomic features with varying disease outcomes in patients. From a clinical perspective, such genetic insight is invaluable in paving the way for better diagnoses to tailor the type, duration and frequency of treatments to the specific characteristics of the cancer. What this means is that it could eventually be possible to determine which patients would benefit most from intensive clinical follow-up and preventive therapies to minimize their chances of disease relapse. It could also spare some patients from the unpleasant effects of treatments that they don't need. According to the authors, this study provides a framework for understanding how DNA alterations "affect gene expression in breast cancer and reveals novel subgroups that should be the target of future investigation."

However, as it turns out, DNA mutations may not be the sole instigators of cancer. Another study, led by researchers at Case Western Reserve University and published in Science, used a different genomic data type to identify epigenetic enhancers that promote the development of colon cancer. This is interesting because the epigenome acts at the intersection between the genome and environmental factors that can expose the DNA to chemical tags. Unlike mutations in the genetic code that change the sequence of the DNA itself, epigenetic modifications — chemical tags that mark the genome in ways that control patterns of gene expression — may potentially be reversible.

Sifting through intronic and intergenic DNA — segments of DNA that do not encode for protein sequences and have largely been ignored thus far — researchers looked for epigenetic marks that play a role as on-off switches in regulating gene expression. Analysis of these marks uncovered the locations of thousands of sites with epigenetic modifications that differ between DNA from normal and cancerous cells. Taken together, they are strongly predictive of changes in gene expression that can tip the balance towards colon cancer.

What's more, this epigenetic map encompassed most genetic variants known to predispose an individual to colon cancer. This suggests that, besides the effect of DNA variants, susceptibility to colon cancer may partly be due to differences in gene expression caused by epigenetic modifications. Additionally, these epigenetic changes were consistently found across multiple colorectal tumors from different patients at different stages of the disease, ranging from early- and late-stage tumors to liver metastases. Thus, the epigenetic terrain characteristic of colon cancer appears to be more uniform than the genetic landscape of DNA variants, and may provide a more rigorous way of defining colon cancer subgroups.

Together, these two studies underline the importance of compiling a comprehensive catalog of key genomic and epigenomic changes to more accurately classify and understand the progression of different cancers.

Such a catalog will also be important in identifying therapeutic targets. Because not all cancers are created equal — at least genetically — the shift from an organ-focused to gene-focused approach has profoundly affected the development of cancer treatments. Genomic information is already being used in targeted therapies, such as the drug trastuzumab (Herceptin) to treat patients with aggressive Her2 over-expressing breast tumors. Nonetheless, not all patients may respond to the same treatment in the same manner, prompting the investigation of different therapeutic approaches. In a report published in Science Translational Medicine, scientists at the Sun Yat-sen University in China examined — for the first time — the potential application of small interfering RNAs (siRNAs) as a cancer drug.

Small interfering RNAs (siRNAs), close chemical cousins of DNA, are molecules that offer researchers a way to shut off specific genes. Using a mouse model of human breast cancer, the authors showed that turning off the PLK1 gene suppressed the growth and spread of the tumor within the mouse, and increased survival. Moreover, using a cocktail of different siRNAs, to silence multiple genes that promote tumor cell growth, enhanced anti-tumor activity compared to treatment with individual siRNAs.

Importantly, this approach did not trigger unwanted side effects such as non-specific inflammatory responses or toxicity. Much work remains to be done in developing, optimizing and testing this approach. Nevertheless, the use of siRNAs to turn off specific growth-promoting genes in tumor cells provides a versatile and promising avenue for individualized cancer therapy in patients.

While it is still too early to bring any of these findings into the clinic, the study of cancer genomics is advancing individualized medicine. With improving sequencing technologies, the ability to examine cancer genomes and to classify tumors by their genetic profile, rather than simply by their appearance or organ of origin, will eventually allow individualized diagnostics for patients. This, in turn, will help to determine the most effective therapy for a given cancer's genetic and epigenetic characteristics.