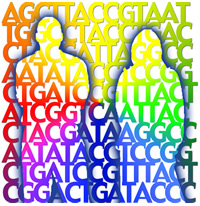 More patients are having their genomes sequenced, forcing researchers and clinicians, who generate sequencing results, to decide whether they will share the results that are beyond those they originally sought.

Researchers and clinicians can encounter gene variants in a patient's DNA that are called incidental or secondary gene variants. According to new research, these data are medically important.

In a recent study published in the July 14, 2012, early online issue of the American Journal of Human Genetics, National Human Genome Research Institute (NHGRI) researchers assessed whether DNA-sequence data from a previous study would yield clinically important, secondary gene variants. Their study addressed whether high-penetrance gene variants - those that almost always lead to the disease - occur in significant numbers in sequencing data.

"These data show that we can identify cancer risk in individuals with no family or personal history of the disease," said Leslie Biesecker, M.D., chief of NHGRI's Genetic Disease Research Branch and senior author of the study. "This is the forefront of genomic preventive medicine - using genomics to identify risk and instituting preventive measures to reduce the risk of disease."

DNA sequencing provides a molecular snapshot of a set of genes, a person's whole genome or the 1 percent of the genome - called the exome - that codes for proteins. When DNA is collected and sequenced, regardless of the initial purpose for obtaining genome sequence, these data potentially include DNA variants that are not part of the initial analysis and yet may have clinical importance for research participants or patients.

The researchers analyzed DNA from 572 adults enrolled in an NIH study called ClinSeqtm, which initially focused on coronary artery disease. They revisited the DNA data looking to find mutations in 37 genes that are linked to a set of 27 cancer syndromes. Many of the cancers are highly penetrant for those who carry the gene variants.

The researchers identified more than 450 variants that differed from the human reference genome, including 334 considered potentially clinically important. Seven people in the group carried gene variants that appear in families with high rates of breast cancer, three of whom had no family history of the disease. One additional person had a gene variant associated with a form of benign peripheral nervous system tumor.

According to the research, medically important, secondary mutations in cancer genes could be present in up to 1 percent of all sequencing samples. The field of cancer will be one of the earliest specialties to benefit from genomic screening for secondary results.

"Researchers, research participants and research ethics committees need to consider that such life-saving results could be lurking in exomes and genomes performed for research studies," Dr. Biesecker said.