The Human Microbiome Project: Extending the definition of what constitutes a human

The Human Microbiome Project: Extending the definition of what constitutes a human 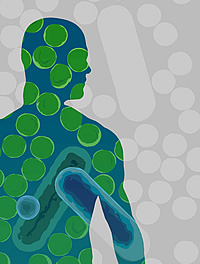 One of the surprises of the Human Genome Project was the discovery that the human genome contains only 20,000 - 25,000 protein-coding genes, about a fifth the number researchers had expected to find. To search for the missing pieces that could account for this discrepancy, researchers started looking toward other sources of genetic material that contribute to human function. One of these sources was the human microbiome.

The microbiome is defined as the collective genomes of the microbes (composed of bacteria, bacteriophage, fungi, protozoa and viruses) that live inside and on the human body. We have about 10 times as many microbial cells as human cells. So, to study the human as a "supraorganism," composed of both non-human and human cells, in 2007 the National Institutes of Health (NIH) launched the Human Microbiome Project (HMP) as a conceptual extension of the Human Genome Project.

Though PubMed includes more than 200 HMP papers to date, this month the HMP Consortium coordinated the publication of two major scientific reports in Nature (Human Microbiota) and a set of 14 Public Library of Science (PLoS) companion papers (The Human Microbiome Project Collection ) to report on the research over the past five years.

The results reported in the Nature papers are a subset of a larger cohort study of the microbiomes of 300 healthy adult men and women in the United States from 18 to 40 years of age. The data in these papers came from an analysis of 4,788 clinical specimens from 242 healthy adults: 129 males and 113 females. Male volunteers were sampled at 15 sites and females at 18 sites from the mouth, nose, skin, lower gastrointestinal tract and vagina. Of these individuals, 131 were sampled again approximately 200 days later to assess the stability of their microbiomes. None of these subjects were taking antibiotics or immunomodulators during the study and all subjects were clinically verified to be free of overt disease at all of the body sites before sampling.

The first surprise from this study: an analysis of the full gene content and composition of these microbiomes (i.e. the metagenome) predicts that there may be more than 8 million unique microbial genes associated with the microbiomes across the human body of these healthy adults. When compared to the total number of human genes, this suggests that the genetic contribution of the microbiome to the human supraorganism may be many hundreds of times greater than the genetic contribution from the human genome.

Also, somewhat surprisingly, researchers found that opportunistic pathogens, which cause disease by taking advantage of those with weakened immune systems, were prevalent in these healthy individuals. However, no highly virulent microbes such as the NIAID Category A-C pathogens, which includes ebola (A), salmonella (B), or rabies (C), were found. Curtis Huttenhower, Ph.D., of the Harvard School of Public Health and his collaborators, likened these pathogens to genetic traits: genetic variants resulting in slightly detrimental traits are common even among those who are healthy, whereas high-risk genetic variants are very rare.

In a related study, Kristine Wylie, Ph.D., Washington University School of Medicine, St. Louis, a post-doctoral student in the lab of George Weinstock, Ph.D., found an increase in viral load, as well as viral diversity, in children under 3 years old with unexplained fever. Since antibiotics only kill bacteria and do not affect viruses, understanding that unexplained fever may be caused by viruses may reduce the unnecessary use of antibiotics, Dr. Wylie said.

Most of the microbes in the microbiome do not cause disease. In fact, humans rely on microbes to perform many important functions that we cannot perform ourselves. Microbes digest food to generate nutrients for host cells, synthesize vitamins, metabolize drugs, detoxify carcinogens, stimulate renewal of cells in the gut lining and activate and support the immune system. In order to gain a better understanding of these interactions, HMP researchers identified not only the taxonomic composition but also the metabolic pathways of the microbial communities found in these body sites. This was accomplished through an analysis of the collective genome sequences of the microbes in these communities. In fact, application of next generation sequencing technologies, which generated sufficient sequencing depth, enabled this kind of analysis. HMP produced more than 3.5 terabases (each tera equals a thousand gigs) of metagenome sequence, which is an order of magnitude more microbiome sequence than any other study of this kind in the world.

No one common microbe was present in all body sites or all individuals. Perhaps counterintutively, researchers found that microbial communities were the most similar between similar body sites. For example, between two subjects, microbes on the first subject's skin were the most similar to the microbes on the second subject's skin. Interestingly, they don't discriminate between men and women. And even twins can have different microbiomes so human genetics may not play a major role in dictating microbiome composition.

Metagenomic analysis also resulted in a list of metabolic pathways present in these microbiomes. What was particularly interesting is that microbial membership varied greatly between healthy individuals but the metabolic pathways of their microbiomes were very similar. In the microbiomes of healthy adults, these capabilities included all of the common 'housekeeping' properties for maintaining cell function and other properties needed for maintaining the body site ecosystem.

Environmental microbes can adapt to exploit new habitats. For example, hydrocarbon-degrading microbes often bloom in the ocean after an oil spill even though oil-degrading microbes are usually rare in the ocean. This is because the oil stimulates the growth of those microbes that can degrade oil and so they outgrow the rest of the microbes that cannot. Is there evidence that human microbial communities also adapt to specific body habitats? Brandi Cantarel, Ph.D., a research associate at the University of Maryland School of Medicine, Baltimore, observed that a particular class of enzymes (CAZymes, which break down complex carbohydrates) was very similar between similar body sites, even when the composition of these communities was different. This observation suggests that human microbial communities do adapt to cooperatively break down specific carbohydrates present on specific body sites. Carbohydrate composition seems to drive colonization by those microbes that have the ability to metabolize these body-site specific carbohydrates.

Also, microbial diversity is not the only microbiome property that varies with the state of health or disease. For example, a significant loss of metabolic capabilities appears to occur in microbiomes found associated with particular diseases such as Crohn's Disease, ulcerative colitis or neonatal necrotizing enterocolitis, a devastating disease of pre-term infants. It also appears that disruptions in the metabolic capabilities of microbiomes may be more predictive of the disease state than microbial composition alone as microbial composition can change with no loss of metabolic function but the opposite is generally not the case. An analysis of healthy metagenomes, such as was completed in HMP, provides the reference data that the field needs to distinguish the metabolic properties of healthy microbiomes, which are missing from disturbed ones in diseased tissue.

These 16 major studies, as well as the 200+ papers that have resulted from the HMP, have laid the groundwork for supporting further research in this young field. The first HMP Nature paper described the vast array of data, computational tools and scientific approaches created as a community resource to support the human microbiome field. The HMP publications have succeeded in demonstrating that the microbiome is a major genetic signal in the human and contributes key properties essential to human function.

This is only the beginning. We have learned that the bacteria living in and on us are not invaders but are beneficial colonizers. The hope is that, as research progresses, we will learn how to care for our microscopic colonizers so that they, in turn, can care for our health.