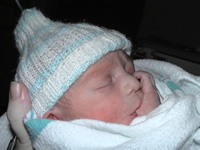 Bethesda, Md., Tues., Sept. 11, 2012 — Researchers have demonstrated for the first time that a refined gene therapy approach safely restores the immune systems of some children with severe combined immunodeficiency (SCID). The rare condition blocks the normal development of a newborn's immune system, leaving the child susceptible to every passing microbe. Children with SCID experience chronic infections, which usually triggers the diagnosis. Their lifespan is two years if doctors cannot restore their immunity.

The findings from facilities including the National Institutes of Health, the University of California, Los Angeles (UCLA), and the Children's Hospital Los Angeles, are reported in the Aug. 30, 2012, advanced online issue of the journal Blood.

In the 11-year study, the researchers tested a combination of techniques for gene therapy, arriving at one that produced normal levels of immune function for three patients.

"Doctors who treat patients with SCID have had limited treatment options for too long," said Dan Kastner, M.D., Ph.D., scientific director of the National Human Genome Research Institute (NHGRI), part of the NIH. "The research teams and the patients who have participated in the studies have together achieved an impressive advance toward a cure that is welcome news for both the scientific and patient communities."

Gene therapy is an experimental method for treating patients with genetic diseases. It is intended to integrate functioning genes among those naturally existing in the cells of the body to make up for faulty genes. Researchers in the current study tested a set of methods to improve outcomes for children with a particular form of SCID.

"This is a highly rewarding study for those of us in the clinic and lab," said Fabio Candotti, M.D., a senior author and a senior investigator in NHGRI's Genetics and Molecular Biology Branch. "Not only have we realized an important advancement in gene therapy, but we have seen a renewal of health in our patients."

While rare, SCID became widely known because of the remarkable boy-in-the-bubble story of the 1970s. The story was based in part on a boy named David Vetter, who lived for 13 years in a plastic isolation unit to protect him from infections. He died following an unsuccessful bone marrow transplant that doctors had hoped would repair his immune system.

SCID has many causes. In one type, a gene that produces the adenosine deaminase (ADA) enzyme becomes mutated and fails to produce the normal enzyme. Without ADA, a chemically altered form of adenosine, one of DNA's building blocks, accumulates in rapidly dividing bone marrow cells, killing them and destroying the immune system in the process. Normal bone marrow makes healthy white blood cells, or lymphocytes, which are the key players in the immune response that reacts against harmful bacteria and destroys cells infected by viruses. ADA deficiency accounts for some 15 percent of SCID cases.

If there is a sibling available whose blood is compatible with the patient's blood, doctors can perform a bone marrow transplant. If not, a form of the enzyme has to be administered by injection regularly to maintain the child's immune system.

Researchers seek to cure the disease by inserting a healthy copy of the ADA gene into continuously dividing bone marrow cells called stem cells. Bone marrow stem cells give rise to all other blood cells, including oxygen-carrying red cells and the white cells of the immune system. The healthy ADA gene would then produce enough enzyme to prevent immune-destroying toxicity.

Getting a healthy, working ADA gene into bone marrow stem cells has proved difficult. Until now, the success of gene therapy for ADA-deficient SCID has been limited to about 10 children in Europe. Now, after 11 years of research, three children who received an optimized form of gene therapy in this U.S. clinical trial have remained well for up to five years and have not required the enzyme-replacement injections.

Together with a research group at UCLA led by Donald B. Kohn, M.D., a senior co-author and professor at UCLA's Department of Microbiology, Immunology and Molecular Genetics, Dr. Candotti's team conducted a gene-therapy trial in 10 patients with ADA-deficient SCID. They used two slightly different DNA insertion vehicles, called retroviral vectors, to deliver the healthy ADA gene into the bone marrow cells of the patients. Retroviruses have the specialized ability to become a permanent part of host cells. Their genome consists of RNA that can be transcribed into DNA, delivering the corrected genetic material to the host cell. The researchers reported the favorable performance of one of the vectors, which will be used from now on.

For six additional patients, the doctors modified their gene therapy approach, stopping enzyme-replacement therapy beforehand and treating patients with a low dose of a chemotherapy that depletes stem cells in the bone marrow, making space for the gene-corrected stem cells that had been given the new gene in the laboratory and then returned to the patient's body.

"This step proved to be important," Dr. Candotti said. "By adjusting the chemotherapy dosage, we found its optimal level for enhancing the efficacy of the corrected stem cells."

An additional eight children, most of whom are 1 year old or younger, have been added to a second phase of the study. The younger patients are showing even more favorable response rates to the therapy. "We are encouraged by the outcome of our gene therapy trial," said Dr. Candotti. "We will continue to follow the progress of our patients and to enroll those who can benefit from this promising gene therapy strategy."

For more information about SCID, go to www.genome.gov/13014325/learning-about-severe-combined-immunodeficiency-scid/.

NIH support for this study, in addition to funding from the NHGRI Intramural Research Program, was provided by the National Cancer Institute, the National Heart, Lung, and Blood Institute and the National Institute of Diabetes and Digestive and Kidney Disorders.

The National Human Genome Research Institute (NHGRI) is one of the 27 institutes and centers at the National Institutes of Health, an agency of the Department of Health and Human Services. The NHGRI Division of Intramural Research develops and implements technology to understand, diagnose and treat genomic and genetic diseases. Additional information about NHGRI can be found at its website, www.genome.gov.