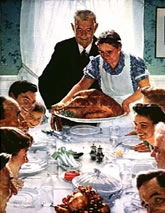 If "you are what you eat," we must better understand our food to keep ourselves healthy. After all, food that we consume is quite literally the building blocks for cells in the body.

In November, researchers from around the world published studies evaluating the potential of genomics to improve our diets. So, in the spirit of the holiday feasts, this Genome Advance of the Month focuses on articles that ask, "What's for dinner?"

Rachel Brenchley, Ph.D., a researcher at the University of Liverpool in England, has pieced together a "fine-grained" picture of the bread wheat (Triticum aestivum) genome. Bread wheat accounts for approximately 20 percent of our caloric intake throughout the world. Efforts are underway to increase wheat production 60 percent by 2050 in order to meet predicted demand. However, climate variability poses a problem for crop yields because bread wheat has very low biodiversity due to thousands of years of domestication. A better understanding of the bread wheat genome and sequence comparison with other strains and ancestral species may result in sustainable increases in yield.

The bread wheat is a difficult organism to sequence because its genome is large - about six times the size of the human genome - and it is difficult to assemble because of its unusual ancestry. It is hexaploid, containing six sets of chromosomes derived from three different ancestors. In other words, assembling the bread wheat genome is like solving a jigsaw puzzle made up of three similar, but different sets of jigsaw puzzles.

Dr. Brenchley and colleagues used a combination of sequencing technologies and clever computational techniques to tackle these challenges. While this study did not produce a fully sequenced genome, the regions of the genome sequenced comprise most of the protein coding regions. The dataset can be used to mine useful variations in the wheat genome that can improve nutritional yield and viability under variable conditions. In addition, the techniques used in this study provide a framework upon which additional sequencing data can be added.

And what of our gluten-intolerant dinner guests? An estimated 3 million Americans suffer from celiac disease, an autoimmune disease triggered by certain proteins in gluten.

Dr. Shanshan Wen from Washington State University has been "going against the grain" by studying DEMETER homeologs, which are genes that, when silenced, may produce a variety of wheat that most people with celiac disease can eat.

In this study, Dr. Wen was able to suppress 85.6 percent of DME transcripts, which resulted in up to a 76.4 percent reduction in gliadins and LMWgs. This indicates the potential for developing a variety of wheat with HMWgs, but without giadins and LMWgs, meaning that this type of wheat can both be consumed by people with celiac disease and be used for baking.

Then, to get to "the meat of the matter," the International Swine Genome Sequencing Consortium published a high-quality draft genome sequence of a female domestic Duroc pig (Sus scrofa). The team also conducted comparative analyses within the pig species as well as between the pig and other mammals in order to paint a clearer picture of the history of pig evolution and migration.

For example, by analyzing the single-nucleotide polymorphisms (SNPs) in the 10 unrelated wild boars from different geographical regions, they confirmed the hypothesis that pigs migrated between Europe and northern China during the Pleistocene epoch that lasted from about 2,588,000 to 11,700 years ago. [A SNP is a DNA sequence variation occurring when a point on the genome differs between members of a species.] Pigs then became more isolated during the colder climates of the glacial period, and suffered a drop in population size at the peak of the ice age.

By comparing human-pig gene sequences that share a common ancestry, the researchers found that many naturally occurring mutations in pigs correspond to mutations in humans that are implicated in diseases such as dyslexia, Parkinson's disease and Alzheimer's disease. This indicates the potential for pigs to be used as a model for studying such diseases. The analysis of the pig genome also provides a valuable resource for biomedical and agricultural research, and has already been used by 13 other publications in a series of companion articles published in BMC Genomics.

Another group led by Dr. Shaogui Guo from the Beijing Academy of Agriculture and Forestry Sciences asks, "Water you eating?" in a publication announcing the draft genome of an east Asia watermelon (Citrullus lanatus) plant. By comparing its genome to cucumber, melon and grape genomes, the team was able to deduce a theory that the watermelon genome, which is composed of 11 chromosomes, arose from a 21-chromosome ancestor after 81 chromosomal fission, or cutting, events and 91 fusion, or pasting, events.

The team also compared 20 watermelon plants: 10 cultivated, six semi-wild and four wild to uncover trends in the evolutionary trajectory of plant domestication. For example, the researchers confirmed that domestication of the watermelon plant has lost a large portion of disease resistance genes. This helps explain why watermelon is susceptible to many diseases and may help identify variations that can be used to bolster disease resistance in the plant. This study lays the groundwork for additional research aimed at understanding the metabolic and regulatory networks in the watermelon, which can facilitate improvement in its viability, taste and nutritional value.

And for one last "cheesy pun," Jeanne Ropars, Ph.D., a postdoctoral fellow at the Muséum National d'Histoire Naturelle in Paris found evidence for sexuality in the fungus Penicillium roqueforti, which is used as a starter in blue cheese.

P. roqueforti was commonly thought of as an asexually reproducing organism. However, Dr. Ropars found that its MAT genes, which are responsible for determining mating compatibility, carry fewere mutations that result in an amino acid change than he would expect if the genes were not under "purifying" selection pressure. This implies that they still have some functional value. He also found genomic mutations that only occur during sexual stages, which indicate that the organism underwent sexual reproduction more or less recently. This discovery opens up the possibility that a sexual cycle can be induced, which can be used to introduce additional variety in blue cheeses.

These studies have not only provided insight into the food that we eat, but have also furthered our understanding of how to compare and analyze complex genomes. It is interesting to note that while the efforts of the Green Revolution in the 1960s mainly sought to breed one (or a couple) dominant strain for each crop, the authors of most of these studies emphasize the importance of introducing diversity, as what survives this year's drought may not be able to weather next year's storm.

These issues are important to investigate in order to maintain levels of food production to feed the world's growing population. So, this holiday season, we would like to thank the researchers who have been playing with their food.