Close encounters of the microbial kind

Close encounters of the microbial kind 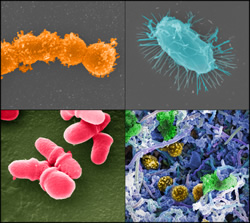 Researchers have long known that there exists a rich ecosystem of microorganisms - including bacteria, yeast and fungi - in the human body that makes up the microbiome and outnumbers human cells by at least ten to one.  Some scientists estimate that the human microbiome contributes more essential genes that ensure our survival, including those that aid in digestion and other basic processes, than our own genomes.

In 2007, the National Institutes of Health (NIH) launched the Human Microbiome Project through the NIH Common Fund to further investigate the genomic composition of these diverse microbes and to interrogate the relationship between humans and our trillions of microbial residents. The National Human Genome Research Institute (NHGRI) administered the program, which ended in 2012.

This month's Genome Advance of the Month indicates that the genomes of humans and microbes may be even more entwined than researchers previously thought. Lead co-authors David R. Riley and Karsten B. Sieber, a bioinformatics engineer and a graduate student, respectively, operating out of the lab of Julie C. Dunning Hotopp, Ph.D., at the University of Maryland, Baltimore, Institute for Genome Sciences, present evidence that bacterial DNA is transmitted to nearby human cells and integrated into the genome.

This study, published in PLoS Computational Biology in June 2013, uses a computational approach to identify bacterial DNA in human genome samples, which is evidence of non-sexual, or lateral, gene transfer. Notably, this refutes conventional knowledge that lateral gene transfer is rare in eukaryotes and basically non-existent in humans. The results of this paper also show that bacterial DNA is enriched in tumor cells and indicate a possible relationship between cancer and bacterial DNA integration.

Prior research has shown that bacterial DNA is taken up by human cell lines. However, cell lines do not always provide the best insight into what actually happens in a human body. These cell lines are comprised of human cells that are propagated in the lab outside of a biological system and are likely to be more susceptible to the incorporation of non-human DNA, because these cell lines lack some defense mechanisms that are available to cells in the body.

In contrast, Dr. Riley and Dr. Sieber identified matches of bacterial DNA sequences in human genomes sequenced by researchers affiliated with The Cancer Genome Atlas (TCGA) and the 1000 Genomes Project. NHGRI administers TCGA (with the National Cancer Institute) and leads the 1000 Genomes Project. Both projects are efforts to sequence large numbers of genomes in diverse individuals and in tumors from patients, so the human sequences used in this study are representative of global human populations. The research team believes that their study may be the first description of lateral gene transfer in samples from actual human individuals - not just cell lines.

The research team first developed a method to identify lateral gene transfer by searching more than one million short, quickly-sequenced snippets of DNA from human samples in the National Center for Biotechnology Information (NCBI) Trace Archive. The archive is a repository of genomic sequencing data of hundreds of organisms important to biomedical research. The research team looked for matches to more than 2,000 bacterial genomes with an alignment tool. They were able to find a number of DNA fragments with non-overlapping sections of human and bacterial DNA within the same snippet or within the same laboratory sample.

Satisfied with the success of their methods tested at a small-scale, the researchers moved on to using them with the longer and more reliable sequences produced from next-generation sequencing technology in TCGA and 1000 Genomes. This time, they mapped the individual human genomes from the two databases against the human reference genome and a variety of bacterial genomes available through the RefSeq database, a resource that provides validated and reliable standard genome sequences of various organisms. In some cases, the researchers were also able to assign taxonomic classifications to the bacterial sequences.

This evidence seems to indicate that lateral gene transfer in the human somatic genome may lead to mutations that play roles in diseases such as cancer.

However, Dr. Dunning Hotopp explains, "It is not clear whether cancer cells are more permissive to such changes, if the clonal expansion of populations in tumors facilitates detection of such transfers, or if such changes may be causing cancer." Her team is still unsure if the integration of bacterial DNA is disrupting human cells and causing cancer or if rapidly replicating tumor cells are simply more susceptible to receiving foreign DNA.

It is not a new idea that cancer can arise from the transfer of foreign DNA into somatic cells and the subsequent interruption of normal cell cycle processes. Prior studies have shown that some viruses, including Hepatitis B virus (HBV) and human papillomavirus (HPV), integrate into the human genome and disrupt chromosomal stability.

Dr. Dunning Hotopp's group has yet to determine the chicken-and-egg relationship between lateral gene transfer in human somatic cells and cancer. From her standpoint, subsequent studies should focus on determining "if these mutations are causative or correlative (meaning do they cause cancer or is there something about cancer that makes detecting them easier)" and "the mechanism by which these mutations occur." There may also be certain types of bacteria that are more generous with donating their DNA and specific locations in the human chromosome where the DNA is inserted.

For now, the research from her team suggests that bacteria may be sharing more than just space and resources with their human hosts - they are also sharing their DNA.