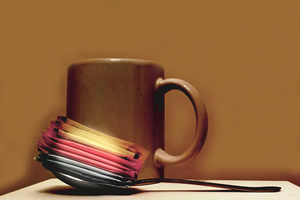 Currently, six types of non-caloric artificial sweeteners are approved by the U.S. Food and Drug Administration (FDA) for use in the United States. These sugar substitutes are popular due to their minimal calorie content and low cost. Many people believe that using non-caloric sweeteners contributes to weight loss, regulation of blood glucose levels and improved dental health. While sugar substitutes are recommended for individuals with glucose intolerance and Type 1 and Type 2 diabetes mellitus, many other people unaffected by these conditions choose these products over natural sugars.

Data on the benefits and risks of artificial sweeteners over the past several years have been controversial. The Genome Advance of the Month for September focuses on a study published in the journal Nature by Dr. Jotham Suez and his colleagues from the Weizmann Institute of Science in Israel  that assessed the potential risks of artificial sweeteners through a mechanism that had not yet been deeply explored: the alteration of gut microbiota.

Gut microbiota, or the population of microorganisms living in the human intestine, play many important roles in the human body, including the regulation of digestion. Diet and other bodily conditions can affect the function and composition of gut microbiota. Because artificial sweeteners are not digested by the body - hence their lack of calories - they come into direct contact with microbes in the intestines.

In a series of experiments, the team fed a group of mice natural products of water, glucose (made when the body breaks down starches such as carbohydrates) and sucrose (table sugar) separately, and another group of mice with three of the most popular commercial sugar substitutes - saccharin, aspartame and sucralose, which are available in U.S. coffee shops and restaurants as Sweet N' Low, Equal and Splenda respectively. When tested for metabolic differences, the latter group of mice showed elevated blood glucose levels within two hours of consumption. Normally, blood glucose levels increase slightly after eating. This increase causes the pancreas to release insulin so that blood glucose levels do not get too high. Blood glucose levels that remain high over time can damage the eyes, kidneys, nerves and blood vessels and, ultimately, can lead to diabetes.

The research team took steps to ensure they were addressing all factors that might have affected their results. They repeated the experiment with mice being fed a high fat diet to see if obesity might alter their findings, administered pure saccharin instead of Sweet N' Low, used a different breed of mice and even transplanted feces of the initial groups into germ-free mice to compare results. In all cases, mice fed with artificial sweeteners had elevated glucose intolerance.

Researchers also fed  the mice antibiotics, which are known to kill microbes in the intestine. Interestingly, the distinction in blood glucose levels in mice fed with natural sugars and those fed with sugar substitutes disappeared. This led the team to further investigate whether glucose intolerance associated with the consumption of artificial sweeteners was induced by changes in gut microbiota.

They also sequenced the genomes of microorganisms found in fecal samples from the mice. Using the Human Microbiome Project reference genome database, the researchers were able to identify and compare the microbiota compositions of the mice, and found major changes in microbe species abundance in those fed with artificial sweeteners. Even more concerning was the discovery of changes in the genes in gut microbiota that have been associated with pathways leading to obesity in mice and humans.

To study the effects of these sugar substitutes on humans, the team collected data from 381 non-diabetic individuals. They found that long-term consumption of artificial sweeteners resulted in increased weight and higher fasting blood glucose levels, among other negative health effects. Even short-term consumption of artificial sweeteners resulted in glucose intolerance and pronounced changes in microbiota composition. Individuals' response varied, leading researchers to consider developing personalized methods to improve the quality of nutritional intake as a future research direction.