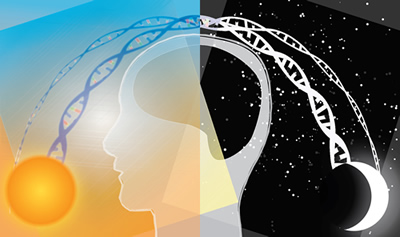 Many biological processes, such as body temperature, blood pressure and sleep/wake cycles, are time-based and change in a cyclical manner. These processes that vary within a 24-hour period are called circadian rhythms. They are controlled by the body's internal "clock" and are influenced by environmental factors such as light and temperature.

Circadian rhythm disturbances, which occur when the body's internal "clock" does not sync up with the external light and dark cycles, occur when traveling to a different time zone (jetlag). Researchers have discovered routine circadian rhythm disturbances (not associated with travel) in patients with schizophrenia, bipolar disorder, depression, seasonal affective disorder and autism. Because of these associations, understanding the genetic basis of circadian rhythms is important for improving human health.

Modern humans are believed to have originated just north of the equator in Africa, a region with a nearly constant 12-hour day and night. As modern humans migrated out of Africa and into a range of latitudes, they encountered seasonal variation in the length of daylight.

Now, new research indicates that during the migration, humans' biological clocks evolved to adapt to these different environmental conditions. Previous research has identified differences in genes within populations of flies, birds and fish located at different latitudes, showing evidence for latitude-driven, natural selection among other species. Natural selection is the process in which organisms that are better adapted to their environment tend to survive and produce more offspring.

The October Genome Advance of the Month discusses a recent study by researchers in Italy, published in the October 30, 2014, issue of Genome Biology, that describes the genetic adaptation to the human circadian clock that was driven by day-length in various latitudes.

Dr. Diego Forni of the Italian scientific institute, IRCCS Eugenio Medea, and his colleagues, report that variation in day-length does indeed act as a selective "pressure", an event that causes a trait to have an advantage or disadvantage in an organism's survival and reproduction. The study found genetic evidence that natural selection occurred as humans moved to different latitudes. In other words, people with circadian rhythms favorable to changes in day-length more frequently survived and passed on their genes. Evidence for this was found at 84 genes known to regulate circadian rhythms and sleep cycles.

The study looked at the frequency of specific alleles, or versions of a particular gene, in a diverse set of people from different latitudes. The results revealed that people who live in places where daylight times are longer or shorter than 12 hours are more likely to have a particular allele - a particular base pair at a specific place in the genome sequence - at a location on the genome known for affecting circadian rhythms.

Those living at similar latitudes with nearly identical daily light/dark cycles, have similar proportions of people with these particular alleles. This suggests that as modern humans moved to different latitudes, those with changes in their genomes, which allowed them to adjust their circadian rhythms according to differences in the length of the day, were better suited to survive. When those survivors reproduced, their children had the same changes.

This study also explored the possibility that genetic variants associated with psychiatric conditions are the result of adaptation driven by differences in day-length. The researchers found that alleles previously known to confer risk for schizophrenia and bipolar disorder also relate to variation in day-length. Therefore, if we can understand how variable day-length affected the evolution of genes controlling our circadian rhythms, we may learn more about psychiatric disorders and possible treatments.