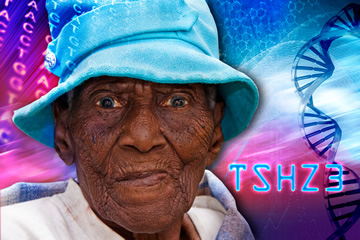 In 2012, an American's average lifespan was nearly 79 years. By comparison, supercentenerians live to 110 years old or more-a life span far exceeding the rest of the population.

There is some evidence for longevity being heritable, and the study of aging (and how to slow it down or even reverse it) has been the focus of study for many biomedical researchers. In fact, one of the 27 institutes and centers at NIH is devoted to this field. Previous Genome Advances of the Month have also looked at efforts to understand the role of our genomes in longevity.

Therefore, it's no surprise that scientists have now used the power of whole genome sequencing to try and discover if there is a particular gene, or combination of genes, that are more common among the extremely long-lived.

In the United States, the majority of people 85 and older experience some type of age-related disease such as cancer, heart disease or stroke. But supercentenarians are less likely to experience these health issues and therefore live longer. Supercentenarians do not make lifestyle choices (such as smoking, diet, and exercise) that are different from those of the average person; but they are unaffected by the environmental influencess that can contribute to age-related diseases. Their resilience suggests there is something genetic that protects them from the health issues most people face in old age.

A recent study led by Dr. Hinco J. Gierman at Stanford University in California, in collaboration with scientists at the Institute for Systems Biology in Seattle, Washington, the Gerontology Research Group in Los Angeles, California, and the University of California Los Angeles (UCLA) medical school, sought genetic explanations for supercentenarians' longer life-span. The November Genome Advance of the Month highlights this research, which was published in PLOS One on November 12, 2014.

To find the genetic underpinnings of the long lived, Dr. Gierman and colleagues performed whole genome sequencing on 17 supercentenarians. Whole genome sequencing gives us an ordered list of the 3 billion nucleotides of a person's DNA. Our DNA is made up of chemical bases called nucleotides, represented by the letters A, T, C and G for adenine, thymine, cytosine and guanine, respectively.

Researchers hoped to find a letter change, called a variant, in the DNA of supercentenarians that was not present in the genomes of people who lived an average lifespan. DNA is the instruction book for our bodies to make proteins, which in turn help our bodies work properly. A letter change in the DNA might cause a protein to work improperly or differently, and in the case of supercentenarians, it might help them to live longer. This type of letter change, which changes a protein's function, is called a protein-altering variant.

The researchers also looked at the supercentenarians' genomes to see whether they carried mutations that we know, from extensive research, to be harmful. They queried the supercentenarians' genomes for 56 different genes that the American College of Medical Genetics (ACMG) has compiled as 'actionable,' meaning that carriers of those genes are at significantly greater risk for certain diseases, but for which there are effective treatments.

Interestingly, Dr. Gierman's group found that two of the 17 supercentenarians carried mutations in genes on the ACMG list, and that one of them had a mutation in a gene called DSC2 known to confer significantly more risk for a heart condition called Arrhythmogenic Right Ventricular Cardiomyopathy. This suggests that the extremely long-lived carry disease-causing mutations just like everyone else, and that there is no clear genetic difference between supercentenarians and the rest of us.

The genomes of more supercentenarians need to be studied before this gene can be conclusively linked to an above-average life span.  It is also likely that several genes work together to affect a complex trait such as a person's life span. Hopefully, future studies can build on this work to explain the genetic factors responsible for supercentenarians' long lives.