CRISPR probes the inner workings of the genome in real time

CRISPR probes the inner workings of the genome in real time 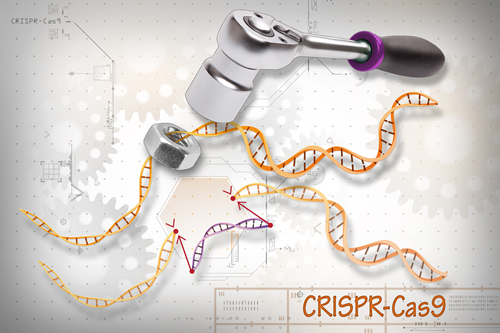 Imagine Sir Isaac Newton has just stumbled upon a Honda Civic. What is it and how does it work? What does the wheel inside control? And what about those levers on the floor, under the wheel - what do they do?

Now imagine he's given a custom set of Civic-specific socket wrenches as well, so he can start tinkering - taking the car apart and putting it back together to see how each individual piece works, like the steering wheel, as well as how a network of parts interact, like the clutch. Eventually, he may figure out quite a bit about the car.

In a way, this is what researchers have been doing to the genome - the complete set of human DNA found in all of our cells - with the new genetic tool called CRISPR-Cas9. CRISPR-Cas9 is a customizable tool that lets scientists cut and insert small pieces of DNA at precise areas along a DNA strand. The tool is composed of two basic parts: the Cas9 protein, which acts like the wrench, and the specific RNA guides, CRISPRs, which act as the set of different socket heads. These guides direct the Cas9 protein to the correct gene, or area on the DNA strand, that controls a particular trait. This lets scientists study our genes in a specific, targeted way and in real-time. So now scientists can study the effects of losing a gene's function by inserting a mutation - a change in the DNA sequence that changes how a gene functions - and studying its effects on the cell and the organism.

January's Genome Advance of the Month describes two studies, published in Nature and Nature Biotechnology, which examine several ways researchers are using CRISPR-Cas9 to study the genome by changing specific genes or groups of genes. This research helps scientists understand the genome by pushing forward our knowledge of a specific gene's role and its importance to our overall health - much like if Sir Isaac removed the steering wheel (the car still drives, albeit in one direction). It also allows scientists to study how different genes interact with each other in a network - like if Sir Isaac removed the clutch (the engine works, but it won't be able to drive the car).

The studies, both published by groups working with Feng Zhang, Ph.D., of the Broad Institute of MIT and Harvard in Cambridge, Massachusetts, tested CRISPR-Cas9 in different ways. One study looked at ways that CRISPR-Cas9 could disrupt a gene or genes, and the other examined how CRISPR-Cas9 could increase a gene's activity.

In the Nature article, Dr. Zhang and his team explored whether CRISPR-Cas9 with gene-specific guides could be used as a more powerful and efficient way to upregulate, or increase, the activity of a gene. Thinking back to the car analogy, this would be akin to supercharging the gene so that it creates more protein, which is the cellular machinery that actually does the work within the cell. Previous researchers were able to double gene activity, but the new strategy boosted this by as much as 15 times, with some genes increasing production 100 or 1,000 fold. Additionally, they found that they could use the system to upregulate 10 genes at one time. This could allow scientists to study, and change, the patterns of an entire network of genes in the future.

Although upregulation might sound like a genetic parlor trick, it does have exciting implications. We each have two copies of each gene in our genomes - one inherited from each parent. Some genetic diseases occur when a person has one working copy of a gene and one non-working copy, resulting in too little protein for the body to perform its regular activities. In the future, doctors might be able to use the CRISPR-Cas9 system to increase the activity of the working gene, thereby increasing the amount of the working protein and perhaps diminishing or eliminating the disease symptoms. One such condition (although one not examined in this paper) is familial hypercholesterolemia, a genetic condition that leads to drastically high LDL - or bad - cholesterol and affects as many as 600,000 people in the United States. Using CRISPR-Cas9, it's possible that scientists could increase the proteins made from the working copy of the gene that break down LDL cholesterol, which could lower a person's overall cholesterol levels, possibly back into the healthy range.

Switching gears (pun intended), in the Nature Biotechnology study, Dr. Zhang and his team used the CRISPR-Cas9 system to study gene changes in real time in living mice. Though this may sound like a step closer to A Brave New World, it's actually a twist on an old way to study genetic changes. Until recently, if a scientist wanted to study a gene's function, they had to breed mice (or other animals) that have a mutated, or "knocked out" version of the gene, a time-consuming process that can take weeks or months. Scientists can study only a few knocked out genes at a time, which is akin to building a car without a gas tank to see what the gas tank does and then building a car without tires to see what the tires do. Dr. Zhang's team showed that, using the CRISPR-Cas9 system, a gene can be knocked out while the animal is alive. Not only were the CRISPR-Cas9 knockout mice faster to generate, at 2-4 weeks, but they allowed for the study of the adult mice's behaviors before and after loss of the gene or genes.

In this case, the researchers studied one gene, MeCP2, a gene whose mutations in humans cause Rett syndrome, which leads to problems with language, learning, and coordination in girls. As in Rett syndrome, the mice that lost the function of MeCP2 also displayed learning difficulties. Further, scientists have long known that MeCP2 mutations cause wide-ranging problems because the proteins this gene creates control the function of other genes in the genome. When Dr. Zhang's team studied the cells of mice with and without the MeCP2 mutation, they found that 34 other genes throughout the genome had different patterns of expression as a result of the mutation. This may help to study Rett syndrome, as well as many other genetic conditions and their effects on other genes.

Taking their knockout-mice a step further, the researchers tried to change an entire network of genes by targeting genes called Dnmt3a, Dnmt3b, and Dnmt1. These are active in almost every cell of the adult human brain, and aid in learning and creating memories. After inserting the CRISPR-Cas9 system into the mice, they found that more than 75 percent of the Dnmt3a and Dnmt1 genes in the mice were knocked out, meaning the genes no longer worked in the cell. This proved that CRISPR-Cas9 could be used to simultaneously knockout multiple genes at once, and can therefore be a powerful new tool for studying networks of genes.

Taken together, these two studies pave the way for more basic research, as well as a move to more applied, clinical research using the CRISPR-Cas9 technique. The work will allow other researchers to study simple and complex genetic diseases more efficiently, and vastly enhance scientists' ability to probe the inner workings of our genome - like giving Sir Isaac an entire garage filled with tools - which will lead to a more nuanced understanding of our genome and ultimately improved treatment options for genetic diseases.