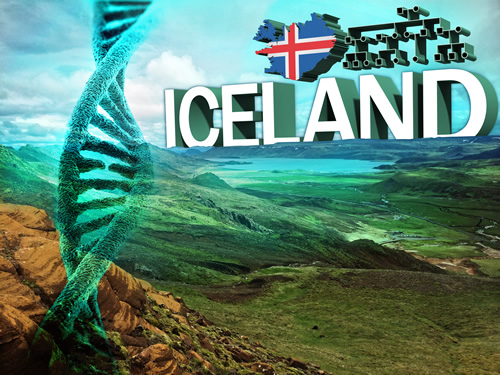 For some, Iceland conjures thoughts of geothermal spas like the Blue Lagoon, moonlike landscapes and literary sagas peopled with Huldufólk, elfin creatures. Most people do not, however, think of large-scale genomic studies.

But maybe they should. Last month, Kári Stefánsson, M.D., Daníel Fannar Guðbjartsson, Ph.D., and their research team at deCODE genetics announced findings based on the whole genome sequence information of 2,636 Icelanders and the genotypic information of 104,220 other Icelanders. Dr. Stefánsson is also chief executive officer of deCODE genetics, a biopharmaceutical company in Reykjavík, Iceland. The March Genome Advance of the Month focuses on some of the interesting results published as a collection of papers in last month's Nature Genetics.

Iceland is well-suited for genomics research for a few reasons. The island's relative isolation has resulted in a population of approximately 320,000 that is almost entirely descended from a single family tree. Data about the population's genealogy has been extensively recorded since 740 AD, and sits in an accessible database called Íslendingabók or book of Icelanders. In population genomics, this is called the founder effect, in which the lack of diversity limits the number of genomic variants (differences between people), and allows usually rare variants to become common enough in the population to be more easily noticed and studied. (To avoid awkward situations like accidentally dating your cousin, Íslendingabók was recently connected to an application that quickly identifies the degree of relatedness between any two people.)

Additionally, electronic medical records, part of the country's national healthcare system, easily link genotype (the sequence of bases that make up a person's DNA) to phenotype (the observable characteristics of a person).

Having fully sequenced 2,636 Icelanders, the researchers compared the genomes of the individuals and looked for areas where they differed from each other. They found about 20 million SNPs (single nucleotide polymorphisms, individual points in the DNA where the base pair of one person differs from that of another person at the same location), and 1.5 million insertions and deletions (where a stretch of DNA base pairs has been added to, or removed, from the DNA of a specific person.)

The researchers then examined 104,220 Icelanders-about a third of the country's population-who had specific parts of their DNA sequenced with a technique known as a genotype array (which looks for the presence of different SNPs, rather than sequencing that individual's entire genome). Based on the variants they had discovered in the larger group, they projected the sequence of genotyped participants' whole genomes based on long stretches of DNA sequence that were similar to the smaller group of fully sequenced participants.

This allowed them to determine with a high level of accuracy which alleles were present in each individual. Alleles are different forms of the same gene having different base pair sequences; an individual inherits two alleles for each gene, one from each parent. Genes are specific sequences of DNA base pairs that contain the code each cell needs to make proteins. Proteins are large, complex molecules that do most of the work in cells and are required for the structure, function and regulation of the body's tissues and organs.

The next step was to annotate the variants by identifying the locations of genes and all of the protein-coding regions in a genome, and to then determine what those genes do. Once annotated, the researchers zeroed-in on those variants that rarely occur in the population and are thus more likely to be linked to disease. These included mutations in the BRCA2 gene (0.4 percent in Iceland and negligible in other populations), which are associated with breast and other cancers, and in the ALDH16A1 gene (1.7 percent in Iceland, up to 0.4 percent in others) that are associated with gout.

Special attention was paid to variants that completely disrupted the function of a gene, known as loss-of-function (LOF) variants. One way that researchers can discover the function of a gene is by studying it in a cell or organism where that gene is not functional, or "knocked out." This is possible to do with cells grown in petri dishes, or even some laboratory species, commonly fruit flies, zebrafish, and mice, but obviously not practical or ethical to attempt in humans. Therefore, identifying naturally occurring knockouts-these individuals with LOF mutations-can shed light on the function of those genes.

Each individual was found to have, on average, 149 LOF genomic variants. Of those, on average only 1.4 of these variants were rare in the population, making them the most likely disease-causing candidates.

They also found a large number of homozygotes in the Icelandic population, especially in offspring of parents from the same region. A homozygote is a person with two of the same allele and a heterozygote is someone with two different alleles of a gene for a particular trait.

Another paper in the collection highlighted a group of Icelanders with "knocked-out" genes. Patrick Sulem, M.D., and his team, found 6,885 individuals to be homozygous for LOF variants in a gene, resulting in a complete loss of the functioning protein product, or knockout.

Additionally, 1,249 individuals were compound heterozygotes for two alleles that together caused a complete knockout of gene function, and 553 were found to have more than one gene knocked out. In total, 7.7 percent, or 8,041 individuals in this study, were found to be complete knockouts for a total of 1,171 genes, 790 of which occurred less than five times in the study population. The more rare the LOF mutation, the more likely it is to cause disease. That's because, genes that cause disease can reduce a person's lifespan and potential to reproduce, so the LOF genes aren't passed on to the next generation.

Another paper published as part of the Iceland study focused on linking genomic variants and information from health records. Researchers discovered that some disease-linked alleles occurred at a higher frequency in the Icelandic population, but were not frequently found in more diverse populations.

Finally, having a good understanding of which variants are common allowed the research team to comb through medical and genetic data to see if they could identify new genes that might contribute to a particular disorder. One such effort, led by Stacy Steinberg, Ph.D., and described in another of the papers, looked at Alzheimer's disease in 3,419 individuals with the disease, and 151,805 control participants without it, and found a strong association with several LOF variants in the gene ABCA7. This gene is expressed strongly in the brain and involved in phagocytosis, the housekeeping process that clears away dead cells and harmful substances. Researchers also found an association between the gene MYL4 and atrial fibrillation, a common form of cardiac arrhythmia and one of the top 10 most prevalent heart conditions in Iceland.

Along with the discovery of genetic associations with diseases that are universally applicable and human knockouts, this collection of papers also shows the potential of large-population studies. The United States will soon launch a large population-based study at least 1 million people as part of President Obama's Precision Medicine Initiative. Since the population of the United States is significantly more diverse than that of Iceland, researchers will need to sequence many more people to get the same depth of information. American researchers will also face challenges in collecting medical data due to the country's fragmented health care system.

Although the Precision Medicine Initiative will be a challenge, the rewards should be ample. By understanding our population and the role of genomics in health, scientists and clinicians are on the path to improving disease diagnostics and treatment.