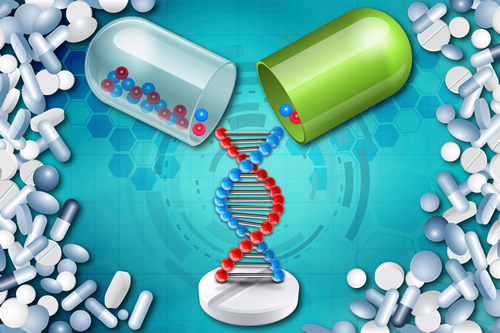 Drug development is a risky business. More than half of candidate drugs that look promising in the research lab will ultimately fail. More than a quarter of drugs that reach the clinical trial stage will be rejected as ineffective. However, the wealth of genomic information now available through public databases - in particular, the rapidly growing number of known associations between diseases and specific genes - may significantly improve the drug-development success rate.  At least, success rates will improve if drug developers let genomics guide their choice of molecular targets for research, according to a team of pharmaceutical industry and academic scientists.*

June's Genome Advance of the Month focuses on how drug development success rates could be improved by using known genetic associations to help choose research targets. Here, we highlight a recent study published in Nature Genetics led by Matthew R. Nelson, Ph.D., of GlaxoSmithKline in Research Triangle Park, N.C., in collaboration with other scientists.

The U.S. Food and Drug Administration (FDA) must approve all new drugs as safe and effective before they can be marketed in the United States. Clinical trials aimed at building a case for FDA approval are divided into three phases: Phase I, involving as few as 20 volunteers, tests primarily for safety; Phase II, usually involving 100 or more participants, evaluates the drugs for both efficacy and side effects; Phase III tests a larger population, often several thousand patients, for efficacy and adverse reactions.  Of those drugs that enter Phase I, about two thirds make it on to Phase II, and only a third make it to Phase III. Ultimately, only one in ten drugs that start at Phase I are approved by the FDA.

Concerned about the attrition rate, Dr. Nelson and his colleagues wondered whether genetic information could help account for those that made it through to approval. They sought to determine the importance of genetic associations in deciding which gene products (which proteins for which a disease-associated gene) would be the best targets for disease treatment. Their conclusions indicate that gene-disease associations could indeed point researchers in the right direction.

"We estimate that selecting genetically supported targets could double the success rate in clinical development," although the rate varies dramatically among diseases, the study reports.

The researchers used several databases to identify known genetic associations. These included: GWASdb, which includes thousands of gene-disease associations identified by Genome-Wide Association Studies (GWAS); the NHGRI-EBI GWAS catalog, a quality controlled, manually curated and literature derived collection of associations between DNA sequences and physical traits; the database of Genotypes and Phenotypes (dbGaP); and the Online Mendelian Inheritance in Man (OMIM), a collection of human genes and genetic phenotypes. They then manually mapped traits to disease terms specified in the Medical Subject Heading (MeSH), an online medical vocabulary search tool, and gathered information about drugs at various stages of development using the Informa PLC Pharmaprojects database.

Results indicated that genes associated with variation in human traits have provided more targets for successful therapeutic drugs than those without such links. Researchers hypothesized that when genes are mutated, those that affect physical traits will also be more responsive to a drug's effects on the body.

Dr. Nelson and his colleagues also suggested that drugs fared better in the drug development pipeline when these drugs targeted well-studied genes known to be associated with disease, especially when looking at musculoskeletal, metabolic and blood disorders. This finding highlights a need for widely accessible reference databases that aggregate gene-disease associations using a non-biased approach and such databases are already supported by the National Institutes of Health.

The National Human Genome Research Institute (NHGRI), part of the National Institutes of Health, has several projects that aim to facilitate use of genomic information in medicine by incorporating data into large, publicly accessible databases. Among these are: Consensus Measures for Phenotypes and eXposures (PhenX), which focuses on the harmonization of phenotypic data sets into one large, comprehensive database leading to detection of novel associations; the Implementing GeNomics In pracTicE (IGNITE) Network, which examines methods and outcomes of various drug-gene pairs within the larger context of providing clinical support for implementation of interventions and clinical advice; and ClinGen, a public resource of genomic variants (small differences in the genetic code) that can be used to improve human health and advance biomedical research. As genomic studies uncover more and more associations between genes and diseases, the role of genomic information in drug development will likely only get stronger.