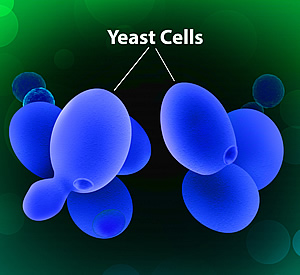 Demystifying the intricate underpinnings of genetic processes has been, for many years, a "look, don't touch" endeavor for biologists.  Genetic material and the complex machinery within cells that direct these processes are delicate and complicated. Tampering with these elements has proven difficult, both to alter and track the cells as they pass on their genes to their daughter cells.

In the March  Genome Advance of the Month, we learn how scientists have dared to redesign a species of yeast - Saccharomyces cerevisiae - that has been instrumental to winemaking, baking and brewing since ancient times.  Researchers chose to redesign some of the S. cerevisiae genome, the yeast's complete set of genetic material. After cutting and shuffling the genes on a segment of the yeast genome using a computer simulation, they created a blueprint for a sleeker sequence that can be rearranged on command. The scientists stitched together many nucleotides, the basic building blocks of DNA, following the map of the simulated reference sequence. The end result was a synthetic chromosome called synIII, which functions correctly when inserted into a host yeast cell.

Scientists have constructed synthetic bacterium and virus genomes, but have never before succeeded in creating a chromosome from more complex cells like yeast from scratch.  Unlike much simpler bacteria, known to scientists as prokaryotes, the genomes of eukaryotic cells are larger and more complex; their DNA is twisted tightly into multiple tiny packages called chromosomes. Bacteria, on the other hand, usually contain just one compact loop of DNA,  which are often easier to work with and replicate, due to their simpler structure and smaller size.

The synIII chromosome is the first entirely man-made designer chromosome in a complex cell. This marks a major milestone for the international team behind this study, who will use these methods to construct an entire synthetic eukaryotic genome, Sc2.0 (www.syntheticyeast.org), creating a complete artificial yeast genome from scratch to implant into a host cell.

S. cerevisiae is used as a model organism by investigators seeking answers about the interactions between genes in more complex cells.  The S. cerevisiae genome includes about 6,000 genes, which produce proteins with similar functions to that of more complex cells-including those in multicellular organisms like humans.

Approximately 5,000 of the 6,000 genes in the S. cerevisiae genome have been found to be "nonessential" - that is, the yeast can survive even when these genes are mutated so as to be nonfunctional (researchers determined this by observing the gene's expression when they were turned off individually). Even though the majority of the yeast's genes are nonessential, they may impart selective advantages that allow them to persist.  In putting together the synIII chromosome, the researchers sought to identify which of these individually nonessential genes could be safely deleted after accounting for multiple gene interactions.

Jef D. Boeke, Ph.D., and his team at Johns Hopkins University (JHU) in Baltimore, used a computer to rearrange and delete extra DNA segments that did not code for proteins.  They drew a rough sketch of what their desired synthetic chromosome might look like after altering stretches of the native chromosome, causing the genes to "scramble" when treated with a hormone called estradiol.  This allowed the team to control the evolution and size reduction of the S. cerevisiae genome.

With the simulated synIII model as a reference, undergraduate students enrolled in the "Build-A-Genome" course at JHU used DNA 'building blocks' to piece together larger strings of DNA (called 'minichunks'). Other sequences of artificial DNA were used to track the nonessential genes as they were added to the synthetic chromosome.  After 11 rounds of inserting new genes into the host yeast cell, the smaller, streamlined synIII sequence was all that remained.

Despite a few slight differences between the predicted sequence and the resulting synIII, yeast colonies implanted with the artificial chromosome grew as rapidly and were as genetically stable as the unmodified S. cerevisiae colonies; they were essentially indistinguishable.

Though a major objective of the study was to create a catalog of possible genes that could be deleted while still allowing the yeast to to survive under specific conditions, the research team faced challenges when they scrambled the individually nonessential genes. The team will need to make some modifications to gain greater control over rearrangement, but the fact that genome biologists can now design and construct human-made eukaryotic chromosomes is an important step in designer genome science.

Dr. Boeke and his team have demonstrated the feasibility of overhauling the yeast genome without affecting its ability to survive and reproduce. As they proceed in synthesizing the 15 remaining yeast chromosomes we will see how in the future we might reengineer genomes in more complex organisms.  Aside from this technology's clear applications in industry-S. cerevisiae can be used to produce biofuels-one day we might design and implant synthetic human chromosomes as gene therapies, or perhaps even replace complete genome sets to mend disease-causing mutations.