Digging Into The Past To Uncover The Cause Of Our Cavities

Digging into the past to uncover the cause of our cavities 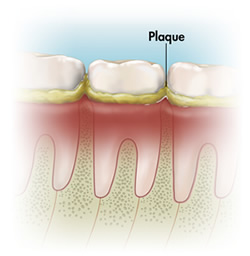 Today, oral disease is a major health problem, with cavities affecting 60-90 percent of school-aged children in industrialized countries and periodontal disease affecting 5-20 percent of adults worldwide. With these statistics, it seems unimaginable that prehistoric humans or "cavemen" had teeth at all since they did not have the toothbrushes, floss and mouthwash that we have today.

However, archaeological evidence has revealed that cavities were rare in humans until the beginning of the Neolithic period (~6,000 years ago), after which the prevalence of cavities and periodontal disease increased considerably. Interestingly, this marked change in oral health coincides with the period of time in which humans transitioned from hunting and gathering food such as meats, greens, nuts and berries, to primitive farming of crops, which introduced grains and carbohydrates into their diet.  April's Genome Advance of the Month highlights a study published in Nature Genetics that examined how the evolution of the human diet might have altered our natural ability to fight off cavities.

Just like the digestive tract, a healthy mouth requires the presence of a large, diverse population of "good" bacteria to protect against potentially harmful bacteria. If this healthy balance of bacteria is altered, the oral tissue becomes much more susceptible to cavity formation and periodontal disease.  An imbalance or alteration in oral bacteria populations can be caused by dietary changes like the increased consumption of carbohydrates.

The team of scientists compared the bacterial composition of prehistoric and modern human mouths by collecting dental calculus, a calcified form of plaque (an extremely dense film of bacteria), from the teeth of 10 modern European humans and 34 prehistoric European human skeletons that dated from between the Mesolithic period (~7,500 years ago) and the medieval period (~400 years ago).  Despite the bacteria being as much as 7,500 years old, the calcification of the plaque into calculus preserved the bacteria morphology and allowed the scientists to extract bacterial DNA for sequencing. The DNA sequences were then compared to those in the recently completed Human Microbiome Project reference sequence database in order to identify each species of bacteria present in the calculus samples.

The scientists determined that the composition of oral bacteria did indeed shift upon the rise of early farming.  Consistent with the finding that they had a much lower incidence of oral disease, Mesolithic hunter-gatherers were discovered to have fewer and lower percentages of the species of bacteria that are associated with cavities and periodontal disease, such as P. gingivalis.  These results suggest that the transition to farming and the change in diet during the Neolithic period had a lasting impact on the human oral ecosystem.

Since prehistoric humans began farming, the composition of oral bacteria remained relatively stable through the medieval period.  However, the scientists saw a second major shift in oral bacteria between medieval and modern day humans. Compared to medieval humans and their ancestors, modern humans were found to have a much less diverse oral population that was dominated by cavity-associated bacteria like S. mutans.  The authors suggest this dramatic change likely occurred as a result of the industrial revolution (~200 years ago) when sugar beets and cane began to be processed into refined grain and concentrated sugar.  This seems to be a likely explanation because S. mutans and other bacteria efficiently break down these carbohydrates and sugars for energy, which results in lactic acid production and erosion of the protective enamel layer of teeth.

Overall, the evidence presented by the authors strongly suggests that the rise of early farming and the industrial revolution were the two seminal events that altered the human diet, and in turn, the human oral ecosystem.  In addition, this study demonstrates that the development of oral disease seems to be largely determined by the bacteria in our mouths and not by our genes.  As bacteria are important in many other aspects of our health, future investigation may reveal that changes in bacterial populations are responsible for the increased incidence of other common diseases as well.