Genomics is empowering farmers to improve the food supply. 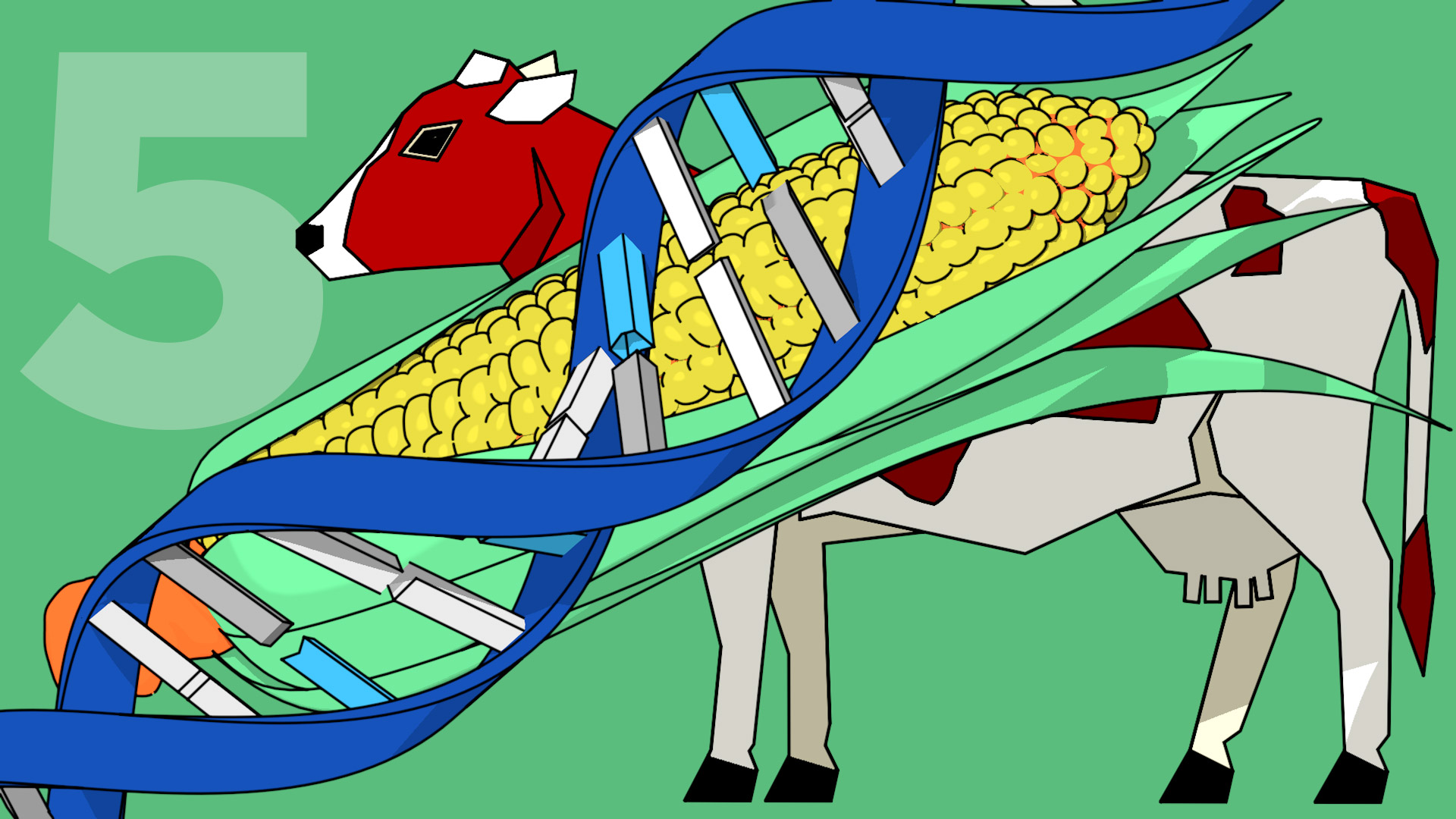 Did you know that in agriculture, genomics enables farmers to accelerate and improve plant and animal breeding practices that have been in use for thousands of years?

The ability to read genome sequences coupled with technologies that introduce new genes or gene changes allows us to speed up the process of selecting desirable traits in plants and animals.

Let's say that you were a farmer thousands of years ago. If you found a couple of plants that were more productive than others, and you needed more food, you might experiment to see if you could combine (breed) those two plants in some way to get better seeds for a better yield in next year's harvest. If you were successful and able to plant those seeds, and then in future generations chose even more productive plants to breed together, over time most of the plants in your field would be even more productive. This is called selective breeding. From Mendel's experiments with peas, we learned that plants have genes that influence their traits such height, seed shape and color. From genome sequencing, we can now find specific variants in those genes that contribute to desirable traits and select for those genomic variants in future crops.

The ability to read genome sequences coupled with technologies that introduce new genes or gene changes now allow people to speed up the ability to select for desirable traits in plants and animals. By mimicking natural processes, scientists can selectively add traits like resistance to herbicides in plants. The resulting offspring have been called genetically modified organisms (or GMOs). One example is "Golden Rice," which is a rice strain that has small bits of corn and bacterial DNA added to its genome. These extra genes allow the rice to produce beta carotene (a vitamin A precursor). The lack of vitamin A affects millions in Africa and Asia, causing blindness and immune system deficiencies.

Those who developed Golden Rice see it as a potential tool for fighting vitamin A deficiency and saving lives. In 2015, they were given the "Patents for Humanity" award by the U.S. government. However, as with other GMOs, there are practical hurdles and societal controversies that have prevented its widespread uptake. Golden Rice has not yet reached the yields of conventional rice in many of its field trials, posing a financial barrier for farmers who might want to switch. At the same time, protesters who do not believe that GMOs are safe for humans have vandalized some of the field trials. Many studies have shown that consuming GMO plants does not pose any more risk to humans than eating non-GMO plants, but the controversy continues in many countries.

Genome sequencing is also now used in cattle farming and with other animals, adding speed and precision to selective breeding methods. In Brazil, scientists are using genomics to characterize specific sequences in hundreds of bulls at a time, allowing them to select for increased meat production and use of pasture feeding (to avoid grain supplementation). They hope that this will lead to animals that grow faster and convert grass to meat in a more sustainable manner over time.

As the human population on earth grows, so too does the need for secure food supplies and delivery to billions of people. World hunger had been on the decline, but it is now on the rise. To meet these demands, farmers will continue to incorporate genomic technologies into their practices, whether through genome monitoring during conventional breeding or genomic modifications with older or newer technologies, like CRISPR/Cas [see Genome Editing]. At the same time, scientists will continue to sequence the genomes of more and more crops, teaching us about differences among them related to their DNA.

One of the most important agricultural advances in the 20th century has been the ability to move food around the globe to people who need it. Unfortunately, food supplies sometimes have unwanted guests along for the ride, such as bacterial pathogens. When people eat the contaminated food, they can get very sick or even die, so it's important to find the pathogens and eliminate them. The U.S. Food and Drug Administration (FDA) has an entire network set up for whole genome sequencing of bacterial contaminants in food, called GenomeTrakr. In 2017, this database had over 5800 bacterial sequences added on average each month, as scientists tracked new outbreaks in the quest to keep our food safe. FDA scientists work closely with others from the U.S. Centers for Disease Control and Prevention, the U.S. Department of Agriculture's Food Safety and Inspection Service, and state health departments to identify bacteria that might cause outbreaks from food contamination. Rounding out this network, the National Center for Biotechnology Information keeps track of what foods are linked to each incident, as well as in human patients who got sick. These information sources have been crucial for lowering the impact of foodborne illnesses over time.