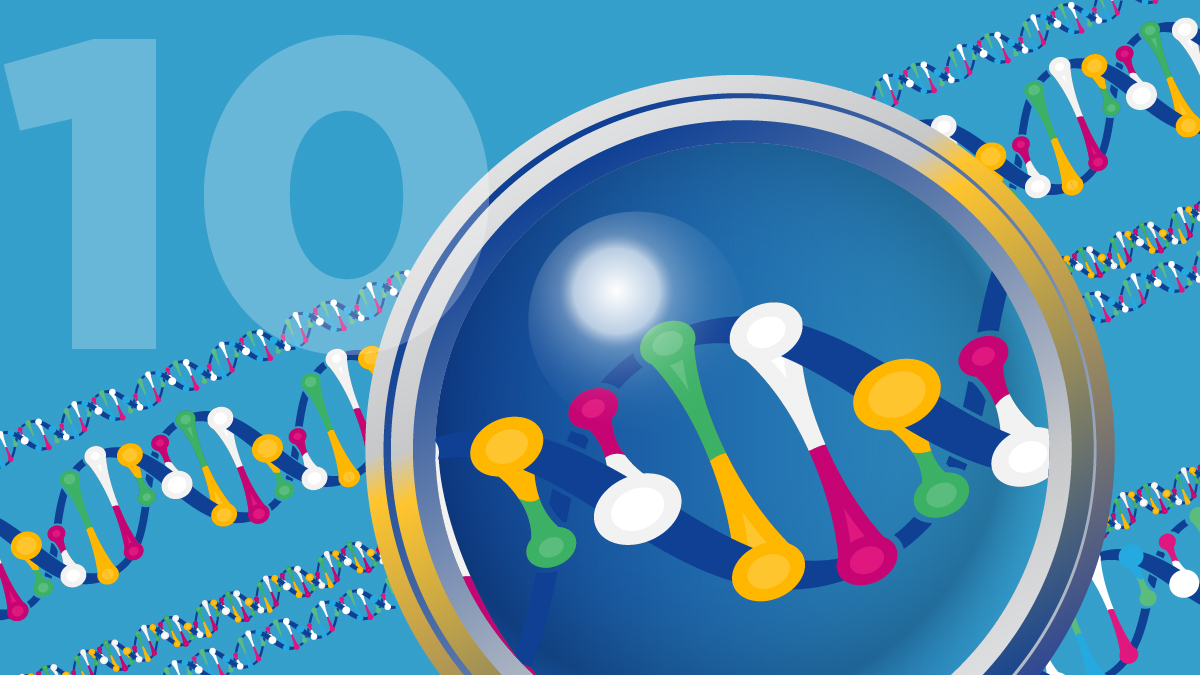 Did you know that forensic analyses of DNA were being used well before the completion of the Human Genome Project, but newer approaches are speeding up and greatly improving the process, and larger DNA databases are making searches more powerful and more widely available? The National DNA Index in the United States now contains information from over 16 million people and has been used to aid in over 387,000 investigations.

Have you ever wondered how those detectives on TV and in the movies actually use DNA analyses to match a person to a crime or to determine the identity of a person by their remains? This is how it works behind the scientific scenes. In the 0.1 percent of the human genome sequence that differs between people [see Human Genomic Variation] are a number of areas where very short stretches of DNA are repeated over and over. These regions arecalled "short tandem repeats" (or STRs). As these stretches of DNA are passed from one generation to the next, they often experience a gain or loss of one of their repeats. At a specific place in the gene TPOX, for example, there are a series of repeats of the four bases GAAT. You might have 10 copies of that GAAT in your genome, while your neighbor might have 14. Since the repeat doesn't affect whether TPOX works or not, it doesn't matter to you or your DNA how many repeats are present. But these changes from one generation to the next lead to differences among STRs across the human population. The British scientist Sir Alec Jeffreys realized in 1984 that by determining the repeat numbers at enough of these STRs across the genome, he could generate a "DNA fingerprint" that was almost unique to each individual's genome.

As new, more powerful technologies for amplifying and sequencing tiny amounts of DNA became available [see DNA Sequencing], scientists teamed up with law enforcement officials to improve the use of DNA analyses for crime solving. In the United States, the Federal Bureau of Investigation created the Combined DNA Index System (CODIS) in 1990. Today, a CODIS forensic profile combines information from analyzing 20 different STRs across the human genome. In theory, the combined data generated for this panel is specific enough to identify one person on earth.

In practice, gathering samples and accurately analyzing the DNA can be problematic. We leave our own DNA behind us all the time, through stray hairs, skin cells, or other materials. This means that samples collected from a crime scene might be a mix of multiple people, and could potentially lead to the real perpetrator of a crime to not be identified. Or, in cases of mass casualties or environmental disasters, many samples might be mixed together or subjected to high pressure, moisture, or temperature. Advances in genomic technologies, including DNA sequencing, are allowing for more precise identification, in some cases using DNA samples collected years ago. For instance, forensic scientists are still working to use DNA analyses for identifying remains from the World Trade Center site after September 11, 2001 and soldiers from the Vietnam war.

DNA forensic analyses are only as good as the people performing the tests. In some cases, samples might get mixed up in the laboratory or statistical calculations may lead to erroneous conclusions. Groups like The Innocence Project use DNA analyses to exonerate people accused of crimes by showing years later that their DNA does not match the sample(s) collected years earlier at the scene.

When DNA evidence is being used in missing persons case, the generated DNA profile will often include markers from mitochondrial DNA and the Y chromosome. Children only inherit mitochondrial DNA from their mother, and sons only inherit the Y chromosome from their father. One example of the use of mitochondrial DNA is the work of Dr. Mary-Claire King with the Grandmothers (Abuelas) of the Plaza de Mayo in Argentina. A group of grandmothers whose children and grandchildren were taken and given to other families donated their own DNA to help find their family members. These abuelas have been working for over 30 years; in 2014, one of the founders named Estela de Carlotto was reunited with her own grandson, marking the 114th child found through their efforts.

As we improve our ability to analyze ancient DNA samples [see Human Origins and Ancestry] and to understand how our genomes encode our traits, we are gaining interesting insights about what humans looked like in the past and now. Recently, genomic analyses of a set of 10,000-year-old human remains in the United Kingdom (called "Cheddar Man" because he was found in the Cheddar Gorge), allowed scientists to predict what some of the first Britons might have looked like. According to the researchers, Cheddar Man and his relatives would have likely had dark skin, dark hair and light eyes. More recently, scientists have been working towards developing a "police sketch" based on analyses of DNA collected at a crime scene. While DNA variation cannot yet predict an exact facial appearance of a person, it can suggest some traits that can be useful for investigating a crime, like hair color and eye color. The limits of this technology have been explored in an art installation where DNA from discarded chewing gum and cigarette butts was analyzed and used to create sculptures of what the person might have looked like. While still highly speculative, forensic scientists may be able to add such an approach to their toolkit along with other lines of evidence for deducing some elements of a suspect's physical appearance.

If you are interested in forensic science, you are in luck! The internet has many things that you can check out. You can test your skills through the game CSI: The Experience or the PBS activity Create a DNA Fingerprint. There is also much more information about using DNA analyses to identify missing persons at the U.S. National Institute of Justice's National Missing and Unidentified Persons System (NamUs).