Genomics is altering a genome with unparalleled efficiency and precision. 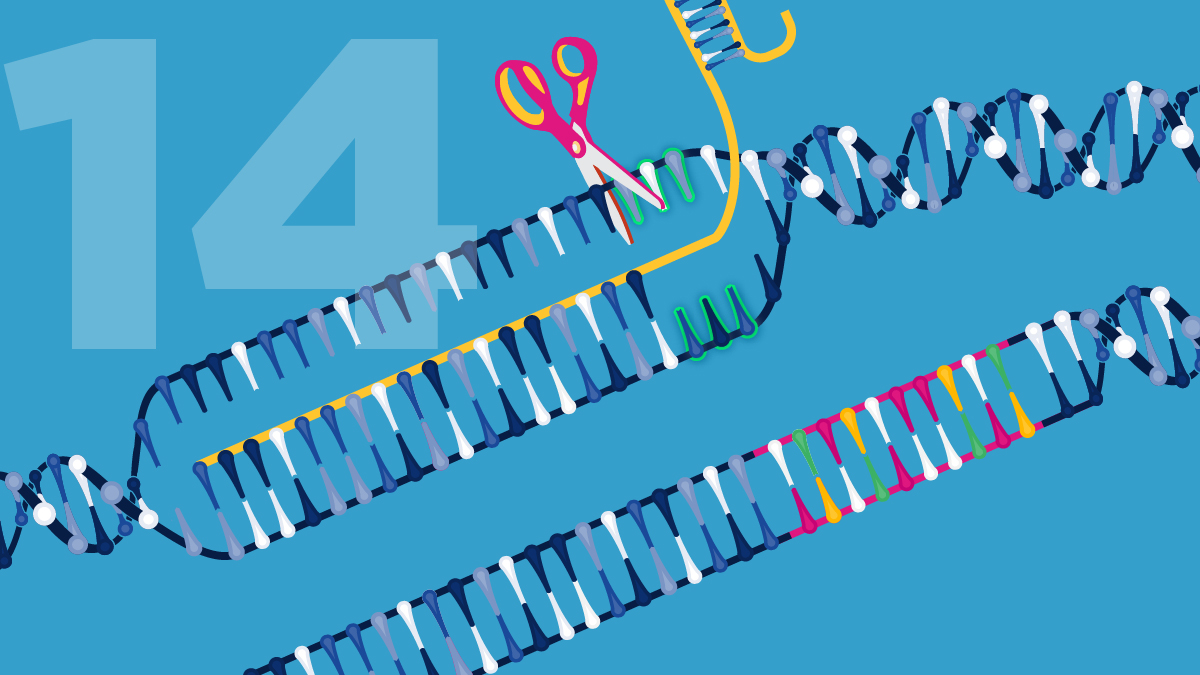 Did you know that in the 15 years since we finished reading the human genome sequence for the first time, we have developed powerful new technologies for editing a human (or any) genomes? We may not yet have jet packs or flying cars, but the ability to edit genomes precisely is now real. These new methods offer the ability to change the genome in a way that could be passed on for generations. But should we?

Some might think that, once we have decoded (that is, read out) the genome sequence of an organism, a logical next step would be to "edit" that genome - perhaps to cure a genetic disease or to alter the a trait in a plant or animal. Scientists have used laboratory methods to make changes in an organism's genome for many years, primarily to study its biology or to introduce commercially advantageous changes. For example, you might have seen "GloFish" - zebrafish that now produce a protein that makes them fluorescent. But in 2012, a new technique called CRISPR was developed and has revolutionized genome editing. The scientists who developed CRISPR recognized that they could borrow tools from the immune system of bacteria and develop "bacterial scissors" for surgically editing any DNA in any organism. CRISPR has made genome editing much simpler, faster, cheaper, and more accurate than previous methods, and the method is now used in laboratories all over the world.

Already, we have seen some exciting early studies that use CRISPR to edit the human genome in an effort to study and, perhaps eventually, to treat a disease. Sickle cell disease causes severe pain and premature death in millions of people worldwide. Scientists have already used CRISPR to remove the mutation that causes sickle cell disease in a mouse model, and are working toward clinical trials in humans. For the latter, scientists will remove blood stem cells from a patient with sickle cell disease, edit the genome of those cells to remove the sickle cell mutation, and then re-insert the modified cells into the person's bone marrow. Since there are still no cures for sickle cell disease, such a genome-editing approach could be a major advance.

Another CRISPR application now entering clinical trials aims to combat human immunodeficiency virus (or HIV) infection. HIV enters human white blood cells and then alters those cells' genomes. Then, it makes copies of itself to infect the person's immune system, making them vulnerable to other infections. CRISPR is now being investigated for use in either cutting out the HIV-derived DNA from the genome as well as engineering a person's genome so that HIV cannot enter their cells. However, it is important to stress that these techniques are still relatively new and very much still in testing mode.

CRISPR editing is not perfect and can even be inadvertently harmful. Although CRISPR is much more precise than previous genome-editing methods, it is sometimes imprecise and edits the wrong place in a genome. This means that it could randomly introduce mutations at the wrong sites rather than the genomic location being targeted. Many scientists are working to reduce this risk of imprecise editing.

Even when CRISPR precisely modifies a genome as desired, the introduced change does not always lead to the expected outcome. For example, some of the studies using CRISPR to combat HIV immediately found that on its own, the virus developed separate new mutations that allowed it to escape the CRISPR edits. These new mutations allowed the virus to start replicating again.

As scientists working on gene therapy for many years have found, there are also important technical issues to consider, especially when considering the use of CRISPR for treating a human disease. In order to get CRISPR-based genome editing to work at the right place at the right time for effective therapy, there needs to be a delivery system that works for that specific body location. This makes the bone marrow and the eye attractive for CRISPR-based therapies because they are more easily accessible; other tissues are not as easy to target with this CRISPR systems. In addition, scientists need to make sure that the human body does not mount an immune response to either the CRISPR tool itself or the components involved in its delivery.

Beyond the technical issues, there are significant ethical issues surrounding the ability to edit the human and other genomes. Let's start with ourselves: so far, most CRISPR studies have focused on editing somatic (tissue or body) cells, so that none of the changes would get passed on to future generations. But CRISPR technologies can be used to edit germline cells, too - these make the sperm and eggs that could carry any genome edits to future children and potentially their children. On the one hand, some might think that it is a good idea to remove sickle cell disease mutations in all future generations. On the other hand, this could open the door to editing genomes to alter other traits, passing the changes on to all future generations. Where would we draw the line?

Is it okay to edit a genome to give a child better eyesight or a few inches more in height? Will we begin to create "designer babies" who might have "better" traits than their parents? As the ethicist and scientist Paul Knoepfler says in his 2015 TED talk, "what is better when we're talking about a human being?" Many groups are considering the important questions that need to be addressed, including the United States National Academies of Sciences, Engineering, and Medicine. Because of these unanswered questions, a current ban on using federal funds for conducting research on human embryos, and the unknown health risks of genome editing, creating "designer babies" is unlikely to happen in the United States anytime soon.

Like many health technologies and medications, genome editing is also likely to be quite expensive as a medical intervention, at least initially. This could worsen health disparities that already exist based on socioeconomic status. As discussed in the Social Contextadvance, there is also valid concern about informed consent. Can future parents of an unborn child truly give fully informed consent for that child to have their genome edited, particularly at the current time when such therapies are not fully tested or proven to be safe?

Beyond human genomes ethical questions about editing other organisms' genomes are arising. Consider the mosquito and its unwelcome passengers: the malaria-causing parasite Plasmodium or viruses such as Zika or dengue. Genome-editing technologies can be used to introduce malaria-battling mutations in the mosquitoes' genome that blocks the parasite from infecting the mosquitoes in the laboratory. This might sound great, but let's think more about it. Introducing these genome-edited mosquitoes into the wild will not make much difference, because the malaria-battling mutations cannot spread through an enormous mosquito population by regular breeding alone. Our edited genome with the malaria-battling mutation will only be carried by half of the offspring from each pair of parents. After three generations, only half of the mosquito population will have the edited genomes.

For the first time, we can introduce genomic changes by genome editing and sweep them through populations of an entire species. On the one hand, you might feel like it's unethical not to introduce such changes if we could stop the spread of malaria. On the other hand, many scientists feel that letting such modified organisms out into the wild is too risky until we understand more about the resulting population-wide consequences. What happens if the malaria parasite develops resistance to the malaria-battling mutations, or comes up with a way to infect another organism? Who gets to decide which organisms are altered in such a large way? Again, the United States National Academies and other organizations are intensely studying the issues relating to these genome-editing technologies, and will issue recommendations as the circumstances change.

There is so much more to learn about CRISPR and genome editing. Many excellent videos show how the CRISPR system works, like this animation from Nature Publishing Group, or this KQED Science look at a DIY gene-editing kit. To go deeper, check out this "It's Okay To Be Smart" video from PBS Digital Studios that looks at the implications of genome editing. You can test your knowledge at pgED's Map-Ed Genetics site, and then put a pin in your location on the map so we can all see where the experts reside. Or consider hosting a Building with Biology Community Forum to gather input from people in your area about what they think about these issues.