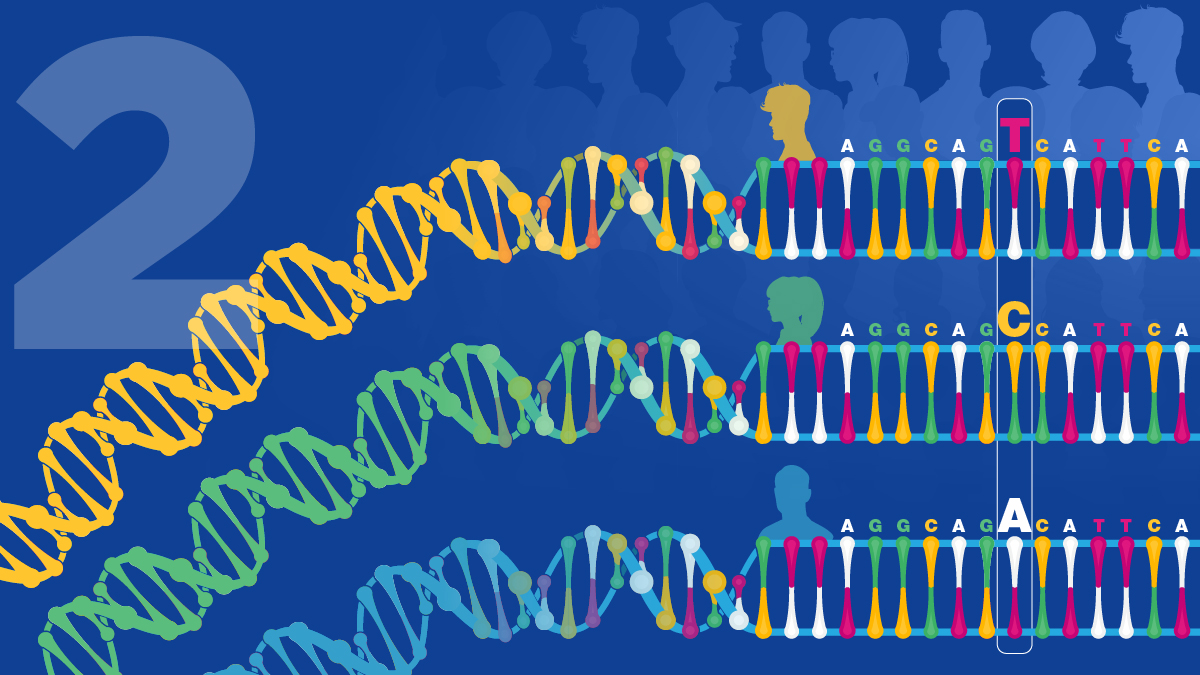 Did you know that at the base-pair level your genome is 99.9 percent the same as all of the humans around you - but in that 0.1 percent difference are many of the things that make you unique? We have learned that people's genomes differ from each other in all sorts of ways. Those differences in your DNA help to determine what you look like and what your risk might be for various diseases. But your genome doesn't entirely define you.

Well before the completion of the Human Genome Project, researchers began developing tools to detect genomic differences between people. When scientists agreed to use the one "reference" human genome sequence generated by the Human Genome Project [see DNA Sequencing], it became easier to determine differences among people's genomes on a much larger scale. We have since learned that human genomes differ from one other in all sorts of ways: sometimes at a single base, and sometimes in chunks of thousands of bases. Even today, researchers are still discovering new types of variants within human genomes. Human genomic variation is particularly important because a very small set of these variants are linked to differences in various physical traits: height, weight, skin or eye color, type of earwax, and even specific genetic diseases.

Rick Guidotti built his career as a fashion photographer until he decided that he wanted to showcase beauty in a different way. Through his not-for-profit organization called Positive Exposure, he began taking beautiful photographs of children and adults with genetic conditions that we don't always see showcased in magazines or on billboards. Rick's work has highlighted the beauty in human diversity (much of it caused by genomic variation); you can see true joy in their online gallery, "The New Faces of Genetics And Beyond." Rick has gone on to create projects like FRAME (Faces Redefining the Art of Medical Education), which is designed to substitute the images of unsmiling children often used in the medical literature and text books with joyous photographs and fun short movies. As Rick says, medical students "are going to be better doctors, because they've seen these kids not in crisis. They've met these kids not in a clinical environment, but they've seen these kids as people."

The Human Genome Project has also led to a change in our understanding of human traits and how we teach them - one example is eye color. For many years, students were taught that one dominant gene controlled brown or blue eyes and that blue-eyed parents could not have brown-eyed children. Scientists knew that the blue-eyes trait was actually more complicated despite what was taught in schools, but technology developed during and after the Human Genome Project helped pinpoint the actual combination of genomic variants that determine eye color. In fact, at least ten genes each of which comes in several "flavors," contribute to eye color. It is the combination of these gene variants in a person's genome that produces the wonderful range of human eye colors. Other traits are even more complicated; for example, around 80 percent of a person's height is controlled by more than 700 genomic variants, each one having a very small influence.

Another area where our understanding of biology has greatly advanced is in the genomics of skin color. Unfortunately, for centuries, skin color has been used as the basis for discrimination against some populations, a consequence of the inaccurate concept of human races. We have always known that skin comes in a wide array of hues and tints. Thanks to the work of Dr. Sarah Tishkoff and her colleagues, we now also know that skin color has changed quite a bit over time, with mixing and matching occurring throughout different populations. Sarah and her team visited numerous different communities throughout Africa, working with them to study their genomes. Her work has shown that there are multiple genomic variants contributing to skin color: some make it lighter, some make it darker, and all of them originated in Africa. Throughout evolution, skin color has been affected by the environment. For example, Sarah's work supports the hypothesis that lighter skin in climates further away from the sun gave an individual a selective advantage (because their skin was able to make more vitamin D and avoid diseases like rickets). In contrast, darker skin color was helpful in climates with more sun (because the pigments in the skin help to prevent sun damage and skin cancer).

This new understanding of the importance of both genomics and the environment has led Sarah and other genetics researchers to call for medical studies to stop using skin color or race as a biological category. Instead, genomic testing for variants that influence traits that are deeper than skin can be used to understand how their genomes might influence their health.

We Are Still Learning

One of the most astonishing things that we have learned about human genomic variation is that we cannot always predict the effect of a given variant. Sometimes there are clear relationships, such as for red hair (the hair color of most redheads is due to one of three single-base changes in a particular gene). But a large study that started in 2012 has shown that each human is walking around with an average of 200 genes that are broken; for about 20 of those genes, both copies (one inherited from each parent) are not working, so there is a "loss-of-function." Surprisingly, in some people, one of those 20 doubly broken genes was previously thought to be responsible for a genetic disease. We would think a person with such a mutation should be sick, but for some reason they are not! Are they "genetic superheroes?" Or are they just more resilient to these genomic variants for reasons that we don't yet understand?

Another possibility is that they are "mosaic," meaning that they have "harmful" genomic variants in some tissues but not others. For example, Joseph Merrick, the subject of the book and movie "The Elephant Man," is thought to have had a disease called Proteus syndrome, which causes overgrowth of skin or other tissues. In 2011, a group showed that mutations occurred in the gene AKT1 in this syndrome. Each person with the syndrome does not look the same because they have different areas of skin overgrowth, and we now know this is because the genomic variant occurred in a different set of cells. Interestingly, the new abilities to sequence very small amounts of DNA have shown that we are all mosaics, and that the genome in one tissue is not always exactly the same as in another. This is a potential problem for diagnosis; since only the DNA in blood is typically sequenced, mosaic-like variations elsewhere in the body could be missed. Single-cell genome sequencing of neurons in our brains even suggests that one neuron might not be the same as the one right next to it!

Studying genomic variants can also point to surprising new ways for developing medications, such as happened with the gene PCSK9. Many research projects have shown that high blood cholesterol levels raise the risk of developing heart disease. We know that both genetics and environment/diet contribute to your cholesterol level, so scientists have been looking for specific genes that might play a bigger role. By looking at lots of people, researchers found that there are some individuals have unusual levels of cholesterol in their blood. These people have very low levels of "bad" cholesterol and a reduced risk for developing heart disease. Scientists searched through their genomes and found that they carry a rare loss-of-function mutation in a gene called PCSK9. It appears that mutations that inactivate the PCSK9-encoded protein make people resilient to any type of diet. Scientists immediately realized that if they could "break" this gene in people who have a good copy, they might be able to lower their cholesterol too. They soon designed a medication that inactivated the protein made by PCSK9. This could mimic the protection from bad cholesterol found in the rare people who inherited the mutated PCSK9. Trials of such new medications have now shown they can lower cholesterol and should prevent heart attacks or strokes. We are likely to see more medicines based on naturally occurring loss-of-function variants revealed by genome sequencing.

If you'd like to know more about human genomic variation, you can participate in a number of research studies. The National Institutes of Health is leading the United States's All of Us Research Program. Or, if you think you might be a "genetic superhero," you can learn more about The Resilience Project and sign up to be a volunteer. You can also browse data about human genomic variation at the IGSR: The International Genome Sample Resource.