Genomics is illuminating human and family origins at a level not previously possible. 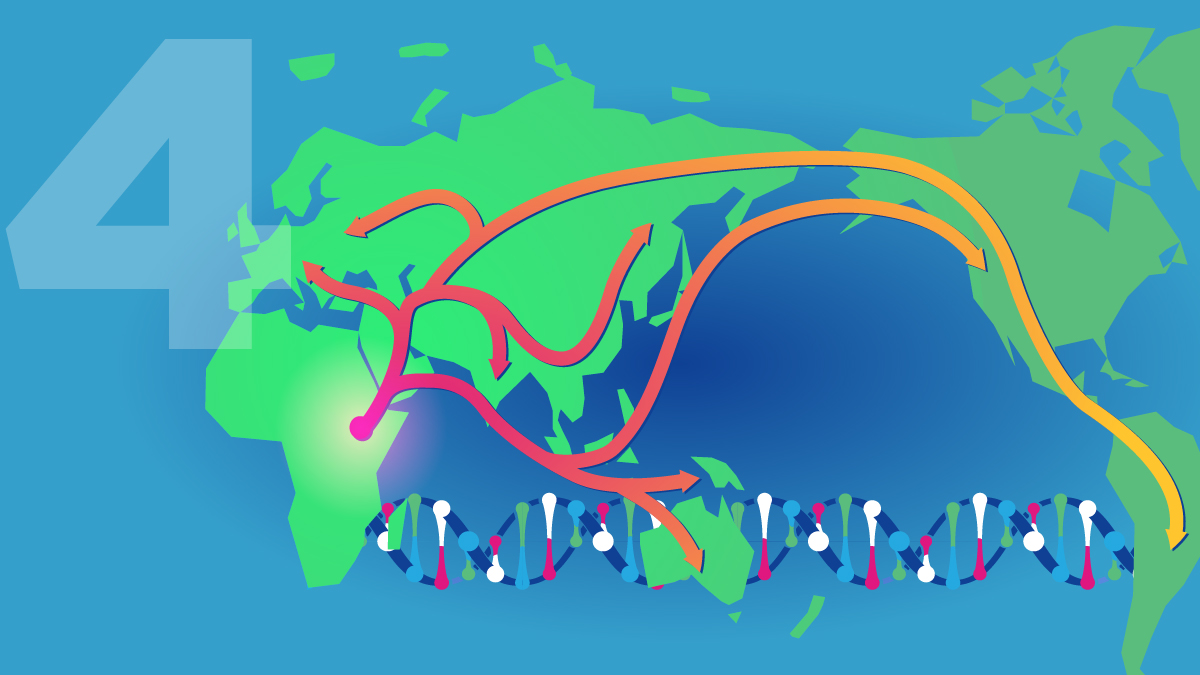 Did you know that your genome helps uncover the history of your ancestors, both near and distant? Advances since the Human Genome Project allow us to compare genome sequences among humans, living and long-deceased, and to trace our collective ancestral history.

Where did different humans come from and how are we related? These are among the most common questions that humans ponder. The Human Genome Project produced a reference human genome sequence that scientists now regularly use to compare with newly generated genome sequences. This reveals genomic changes that have occurred in different populations over time, which provides a more powerful way to decipher the various stories of human origins and ancestry.

Nearly 20 years ago, scientists developed techniques for extracting small amounts of DNA from ancient samples, like bones or fur or even soil, and used very sensitive methods for sequencing the extracted DNA [see DNA Sequencing]. Genomic studies like these have allowed us to examine human genomes from around 500,000 years ago when our ancestors (the species Homo sapiens) were diverging from other similar species, such as Homo neanderthalensis or Neanderthals.

So far, we have learned that Neanderthals took a different path than humans in their migrations around the world, but there are still traces of Neanderthal DNA sequences in our genomes today. These small stretches of DNA may influence traits that have helped people survive in some way, making it more likely to then be passed on to their children. For example, a 2017 study found that some Europeans still carry Neanderthal-like sequences that influence their circadian rhythms, making them more likely to be a morning person or a "night owl." In contrast, some DNA variants might have just happened in one population and not another. The same study found variations in the MC1R gene that lead to red hair were extremely rare or nonexistent in Neanderthals, so that trait seems to be human-specific. As we find better ways to isolate DNA from ancient remains and improve our DNA sequencing technologies, we will learn more about our species' history.

Human Migrations Out of Africa

What happened when humans began to migrate out of Africa and move around the world? Genome sequencing of Africans living in different times - from as long as 6000 years ago to today - has revealed that humans divided into different groups and moved around the world at multiple times. In Southern Africa, local hunter-gatherers and then herders appear to have been replaced by Bantu farmers around 2000 years ago. As humans migrated into Europe, the genomes of different groups also began to retain different variants. One 2008 study looked at about 200,000 specific places in the human genome where people are different from each other [see Human Genomic Variation], among a collection of Europeans. The patterns of genomic variants among different groups could be used to reproduce the map of Europe with 90 percent accuracy. Even more surprising, when a new European person's genome was analyzed, the researchers could predict where that person was from within a few hundred kilometers. More recent studies in the United States also show that genomic variation coupled with genealogical records can be used to infer birth location quite accurately.

As we learn more about genomic variation in specific populations and groups, more robust tests are being developed to help you decipher your ancestral origins. But, before you take one, you need to be aware that the results of these tests may alter your perception of your family history and even of yourself. The DNA Discussion Project, started by West Chester University professors Drs. Anita Foeman and Bessie Lawton, aims to encourage greater understanding of the science of genomics, the social construct of race, and the perception of ethnicity. For example, as Drs. Sarah Tishkoff and Carlos Bustamante's research groups showed in 2010, an African American individual in the United States has, on average, about 75-80 percent West African ancestry and about 20-25 percent European ancestry. Students at West Chester shared that while they had always been told that their family had Native American ancestry, the DNA tests revealed this was not the case.

With such ancestry testing, some people have discovered that their ancestral origin is not what they thought, while others have found that close relatives are not who they thought. Some adopted children have used DNA tests to track down their birth parents, or to find previously unknown siblings. Meanwhile, some studies report that, depending on the country, anywhere between 1 percent and 10 percent of children are raised thinking that someone is their biological father when, in fact, that person is not. Ancestry testing can lead to delicate and complex situations, so it is important to think about the potential consequences before using such tests.

There are many commercial services that allow you to purchase a genomics-based ancestry test or to explore your family's genealogical history. A quick internet search will reveal many options.