Genomics helps us understand evolution and protect our biological ecosystems. 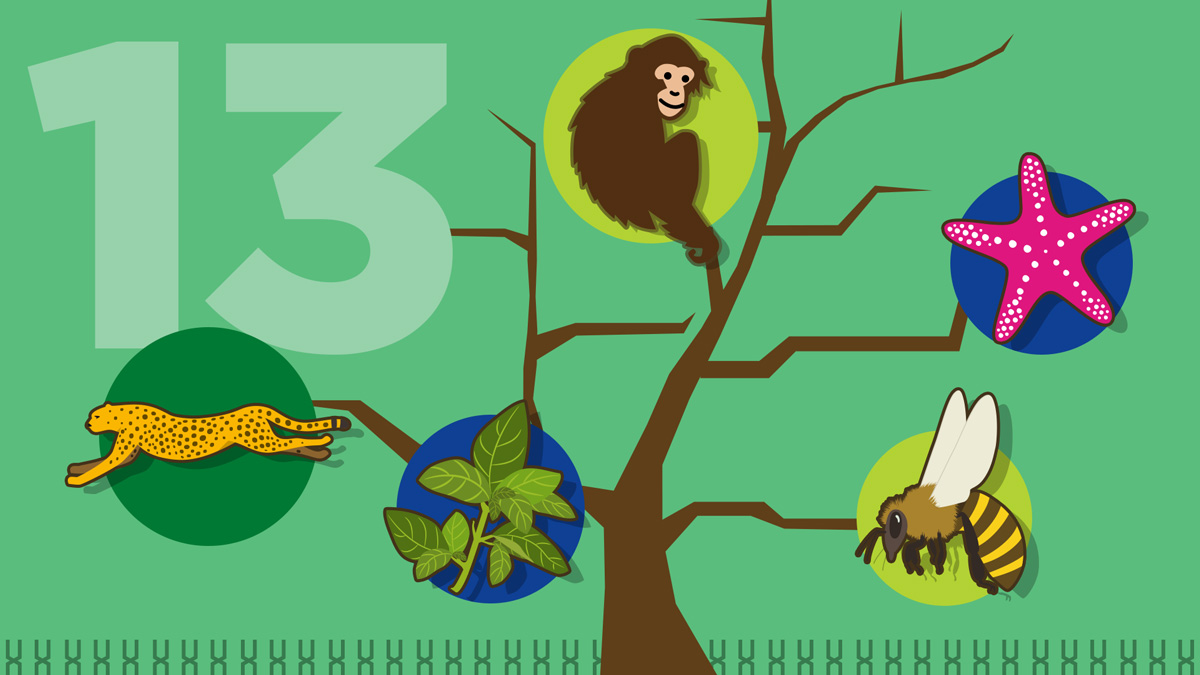 Did you know that the new methods for DNA sequencing have been used to read the genomes of tens of thousands of organisms, some alive and some extinct, allowing us to redefine the "tree of life?" Darwin could never have imagined the full complexity of the tree of life, but genomic technologies have been used to illuminate the natural world in amazing ways. We are all connected to every living thing on earth, from plants to animals to microbes, through our genomes.

Genomics helps us understand the biology of organisms across the world: why are some faster or smarter than others? Why have some gone extinct, while others are resilient to environmental changes? What do their genomes teach us about our own?

Have you ever taken a close look at a platypus? It has a bill instead of a nose and it lays eggs, just like a bird. But it also carries deadly venom like a reptile, and it has fur and nurses its young like a mammal. In fact, when the first body of a platypus was shipped from Australia to a museum in England, the curator thought it was a hoax.

In 2008, scientists determined the genome sequence of the platypus. That study showed that the platypus is truly a unique mix of reptiles and mammals, with genes for venom and milk being retained in the same animal lineage over many years of evolution! Similar genomic studies involving thousands of other life forms have yielded amazing new insights into about every branch on the tree of life.

Recent genomic discoveries have forced us to rethink many long-standing, basic assumptions. For example, we have learned that many seemingly "simpler" species have more genes than humans, including the octopus and the water flea. Other species have much larger genomes than humans, including the loblolly pine (7-times larger than human) and a salamander called the axolotl (10-times larger than human!). We have also had to change the placement of some organisms on the "Tree of Life" - like when we learned that turtles are more closely related to birds than to lizards and snakes, or when DNA sequencing showed how much DNA had been exchanged between different types of bacteria over time [see Microbes and Microbiomes]. We've even been able to sequence the genomes of extinct animals using preserved specimens, like a museum sample of a Tasmanian tiger and the pelt from a woolly mammoth. Although sequencing their genomes cannot bring back extinct species, these studies reveal what these animals had in common with modern life forms on earth - and this, in turn, teaches us important things about evolution.

Scientists can now use information about short stretches of DNA that are unique to each species to establish DNA "barcodes." These barcodes distinguish one species from another. DNA barcoding can be used to make complete catalogs of organisms in a certain ecosystem, like on the island of Mo'orea in French Polynesia. Then researchers can more precisely track how the organisms change over time and in response to environmental changes. DNA barcodes also provide insights about the diets of animals through the DNA in their feces, so we can determine where animals migrate and can help to protect their habitats. In a different application, DNA barcoding has enabled food safety experts to monitor the food supply and prevent fraud. For example, they showed that the large side wings of fish called skates or rays were being cut into circles and improperly sold as scallops in multiple countries. Stopping this illegal activity is critical for skate and ray conservation.

Have you ever wondered what organisms live in the air in the New York subway system or in extreme environments like hot springs, or how bacterial communities respond to environmental disasters like the Deepwater Horizon oil spill?

Thanks to advances in DNA sequencing, there is a new and exciting scientific field called "metagenomics," which involves studying all the DNA in an environmental sample. Following sequencing of mixed samples of DNA, scientists perform computer analyses to catalog all the living things that are present based on matches to known genome sequences. Metagenomics is important because researchers cannot always grow an organism in the laboratory to study its DNA by traditional methods. Now such organisms can be studied while existing in their natural community, like the microbial mats in Yellowstone National Park. From nine environmental samples taken in the Times Square subway station in New York City, researchers identified traces of 114 unique bacteria, in addition to other organisms like plants and humans. Metagenomic studies are allowing us to appreciate the complex interactions of our world as never before.

Think you know what organism has the biggest genome? Try your hand at this activity by Science Buddies to find out. You can explore an interactive Tree of Life or see international barcoding efforts. For more information about seafood, the FDA maintains The Seafood List. If you're interested in conservation, join the 2018 Earth Optimism Summit digital event.

You can also contribute to our knowledge about the natural world by building a BioCube and documenting what you see through the iNaturalist app and use it to participate in a BioBlitz near you! If you are in the Washington, D.C. area, consider participating in the City Nature Challenge (April 27-30).