A few weeks ago, NHGRI renewed its Genome Sequencing Program (GSP), the Institute's largest single grant program that has its origins in the Human Genome Project. Since NHGRI grants are always awarded for a limited number of years at a time, the GSP has experienced a number of 'renewals' - and so this renewal could mistakenly seem like a simple and mindless process. But rest assured, this was not the case!

Genomics is a fast-paced field, with new technologies and approaches being continuously developed. We see the renewal of a program as an opportunity to reformulate and recast our scientific goals to keep up with these developments. So, what is the overarching goal for our renewed GSP? - advancing human disease genomics.

For many years, one of the main goals of the GSP has been to implement new DNA sequencing technologies at larger scale, increase genome-sequencing capacity, and decrease genome-sequencing costs. It was not that long ago when only one human genome sequence was being generated in the world (by the Human Genome Project), and its cost was quite high. Last year, our GSP produced 1.3 Terabases (1,300,000,000,000,000 bases) of DNA sequence (the equivalent of 14,000 human genome sequences), with the associated costs per human genome sequence approaching $1,000. With such a capability in terms of cost-effective data production, it now seems like the right time for the GSP to focus most of its attention on studying human diseases.

Common diseases, such as diabetes and asthma, affect hundreds of millions of people worldwide. Unfortunately, such disorders are quite complicated and require very large studies (involving thousands of affected and unaffected individuals) to identify and tease apart the complex set of genomic and environmental factors contributing to disease. To address this, NHGRI is funding four research centers, the Centers for Common Disease Genomics (CCDGs), for a total of ~$240 million over the next four years.  CCDG scientists will be generating genome sequences for close to 200,000 individuals, initially focusing on cardiovascular/metabolic and neuropsychiatric diseases. Through these efforts, CCDG researchers aim to develop better approaches for using genome sequencing to study common diseases more broadly.

The broader GSP will also include a continuation of the Centers for Mendelian Genomics (CMGs), which aim to identify the mutated genes underlying rare inherited (or Mendelian) diseases. Mendelian diseases, named after Gregor Mendel (the founder of modern genetics), are typically transmitted from parents to offspring and tend to be caused by a genomic defect in a single gene. Of note, I highlighted recent accomplishments of this four-year program in the August 2015 issue of The Genomics Landscape. With ~$40 million of funding over the next four years, the CMGs will continue their work to find the responsible genes, improve gene-discovery methods, coordinate with analogous efforts in other countries, and share resources with the broader scientific community.

With the heavy emphasis of the GSP on studying human disease, one might ask about genomic studies of cancer? The NHGRI GSP has extensive experience in using genomics to study cancer through the very successful The Cancer Genome Atlas (TCGA) effort. TCGA is a partnership between NHGRI and the National Cancer Institute (NCI), and will come to completion later this year. The current phase of GSP will shift away from cancer studies in order to focus on other disease areas; meanwhile, NCI is actively and appropriately expanding its cancer genomics programs. The NHGRI GSP will continue working with other NIH partners - for example, the National Heart, Lung, and Blood Institute (NHLBI) will contribute to both the CCDG and CMG components, while the National Eye Institute (NEI) will contribute to the CMG components. Eventually, we anticipate that other NIH institutes and centers will collaborate with the NHGRI GSP in disease areas of interest. 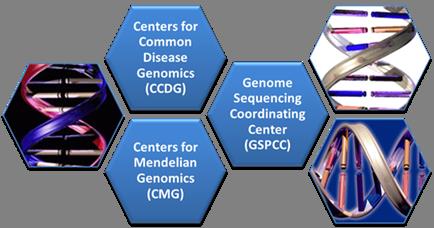 In order to properly support the CCDG and CMG components of the GSP, we have also started a GSP Coordinating Center (GSPCC) funded with ~$4 million over four years. The GSPCC will facilitate interactions among GSP investigators and contribute to data analysis and program outreach. Another way that NHGRI plans to recruit 'new' and creative minds to the GSP is through Genome Sequencing Program Analysis Centers (GSPAC). These groups will be funded later this year to contribute to the analyses of the data generated by the GSP.

Since the early 1990's, I have witnessed the GSP evolve from sequencing the first human genome, to conducting large comparative genomics studies, to generating vast catalogs of human genomic variants, and, most recently, to developing new genomic approaches for studying human disease. Through these efforts, genome sequencing has become a fundamental tool for biomedical research. I am profoundly excited to now watch the next four years of the NHGRI GSP, as it advances our ability to use genome sequencing to unravel the molecular underpinnings of rare and common diseases.