When Dr. Ellen Sidransky, 2019 winner of the Jay Van Andel Award, looks into a rare disease, she finds a window to take the lead in Parkinson's research.

Ellen Sidransky never thought she would study Parkinson's disease because it is not a disease a pediatrician encounters. But Sidransky, M.D., a senior investigator at the National Human Genome Research Institute (NHGRI), knows the exact time and place when that changed.

It happened with a chance discovery a decade ago. Now, Sidransky's work is often referenced in studies on Parkinson's disease. In April, Parkinson's awareness month, Van Andel Research Institute honored her with the Jay Van Andel Award for Outstanding Achievement in Parkinson's Disease Research.

When Sidransky came to the National Institutes of Health in the late 1980s, she wanted to learn molecular biology techniques. At the time, the gene for Gaucher (pronounced go-shay) disease had just been cloned. She thought that would be a great place to start. 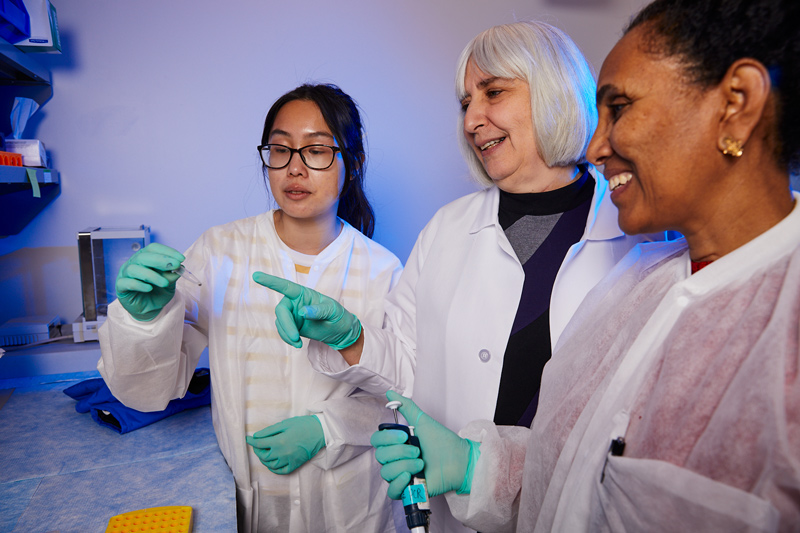 Gaucher disease has variable symptoms, such as liver enlargement, blood clotting problems, or bone pain. About 10 years after Sidransky started studying it, she received a phone call from a former lab student. The student had since become a neuropathology researcher at Massachusetts General Hospital. She was looking at diseases of the brain.

"I'm doing an autopsy on a patient with Parkinson's disease. When I read the chart, I saw that this patient also has Gaucher disease. I saw that you had published some cases with the two disorders. Would you like me to send you a sample from this brain?" Sidransky recalls her saying.

Because Gaucher disease is very rare, having a brain sample of an inflicted person was a real opportunity. At the time, she had already considered whether there could be an association between Gaucher and Parkinson's diseases. Already, to her surprise, she had seen a few patients with the two disorders. To compare, she asked the researcher also to send her two age-matched brain samples from other people who only had Parkinson's disease.

Three frozen brain samples arrived packed in a box with dry ice. All three had Parkinson’s, but only one also had Gaucher. The cold labels had hardened and flaked off. It wasn't clear which brain sample was which. So, Sidransky extracted DNA from all three. She then took a closer look at their genes to identify the one with Gaucher.

A hereditary mutation in the GBA gene causes Gaucher. When a person inherits two mutated genes, one from each parent, they will develop Gaucher. If they only inherit one mutated gene, they are called carriers, and their health is rarely affected.

It was no surprise that one of the samples, that one from the Gaucher patient, had two mutated GBA genes. Oddly, however, the other two brains were genetic carriers for Gaucher. With less than 1% of Americans being Gaucher carriers, this shocked Sidransky.

"That blew us away," she said, calling this moment her "serendipitous adventure in Gaucher disease." This was the start of Sidransky's most impactful discovery — the link between Gaucher and Parkinson's diseases. Having one mutated Gaucher gene is now known to be the most common genetic risk factor for Parkinson's disease.

"It exonerated why you study rare diseases," she said. "Not only do you help people with a severe disease, but you also you might find something from the rare disease that opens up a new window into a common disease."

That chance discovery happened a decade ago. Now, if you Google the enzyme “glucocerebesidase,” the deficient enzyme in Gaucher disease, you'll find many research papers about the link between Parkinson's and Gaucher disease.

However, this wasn't accepted quickly. Sidransky met resistance from the research community.

"They would say ‘this is crazy. There's no connection,’" she said. Researchers claimed there was something wrong with Sidransky's methods that distorted the data. Many said that if the connection were real, then surely everyone would have noticed it already.

Having one mutated Gaucher gene is now known to be the most common genetic risk factor for Parkinson's disease.

“It's a good thing I was at the NIH. If I was at other places and had all these rejections then I wouldn't have been able to get more funding and I would have to just change subjects,” she said.

Sidransky was so convinced that her studies would somehow link Gaucher and Parkinson’s disease that she didn’t want to stop. She phoned all the brain banks she could find. Within a few months, she had 57 brain samples from patients with Parkinson's disease. A remarkable 12 of them had mutations in the Gaucher gene. Still, it wasn't enough, and researchers weren't convinced.

It was Sidransky's international multi-center collaborative study that solidified the find. She brought together 14 research centers and about 5,000 DNA samples from patients with Parkinson's disease. They found that the frequency of having the Gaucher mutation was at least five times higher in people with Parkinson's than people without.

"If you find a way to increase the glucocerebrosidase enzyme associated with Gaucher, then it may have implications for Parkinson's treatment. That's why people are so excited about it," she said.

Sidransky's team continues to look for more connections between Parkinson's and Gaucher disease. They hope to find what else predisposes or protects a person from the condition. She is looking at siblings where both have Gaucher, but one has Parkinson's. She is following other Gaucher patients to see if they develop Parkinson's. And she is doing whole exome sequencing, sequencing the protein-coding regions of genes, to see if she can find what else causes a person to develop the disease. 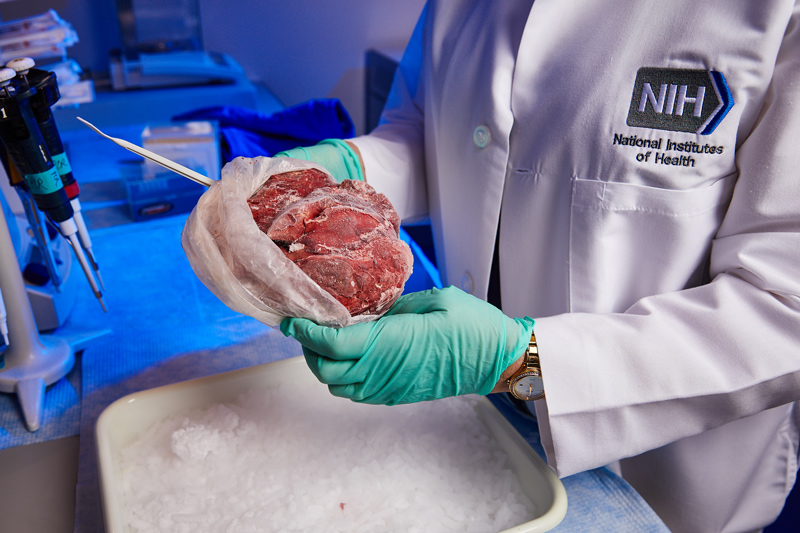 Sidransky can talk about “a freezer of old spleens,” and in the same conversation tie it to poetry and motherhood. Her connections between Parkinson's and Gaucher disease are as valuable as her people-to-people connections. The most important are her patients.

"I've become very fond of my patients," she said explaining that their altruistic attitude inspires her. Many of them take part in research knowing that the benefits will only be realized for subsequent generations. So, they make the most out of a dark situation, like one patient who turned her experience with Parkinson's into advocacy poetry.

"I get to know my patients and their families. I see personal strength," Sidransky said. Some of her patients have reached out to others and offered support in the form of transportation, positive camaraderie, and even money.

"It takes a team to do science, and it takes a team to care for patients," Sidransky said. She adds that the students she mentors will carry on her legacy. At any time, she is mentoring at least six students in her lab.

“Sidransky takes time out of her busy schedule to just sit down with you and chat about how things are going, whether you’re happy with the work you’re doing, etc. I’m very grateful for this close mentorship. Given my experience here I think that I will want to continue to be involved in this type of translational work throughout medical school and beyond,” said Areian Eghbali, a student in Sidransky’s lab.

“I’ve learned the importance of a mentor’s guidance and support,” said Gurpreet Seehra, another medical student in Sidransky’s lab. “I hope to have a similar impact when I am in a mentorship position.

Sidransky isn't stopping any time soon. She is working on a drug for Parkinson's disease. Current drugs only treat the symptoms, but Sidransky hopes to find a disease stopping drug. The Jay Van Andel Award for Outstanding Achievement in Parkinson's Disease Research is a small addition to her accomplishments. They include inspired patients, confident students, and new medical breakthroughs. Yet if she could pass on one lesson about Parkinson's, it would be compassion.

"I wish people would realize that they can't judge people by the way they look. Sometimes people with Parkinson's can have tremors or odd movements," she said, "But it has nothing to do with who they are and how they think."