Investigating how the genome works, one cell at a time

In a recent study published in the journal Nature Biotechnology, scientists have set their sights on chromatin - the DNA-protein complex that packages DNA into chromosomes in the cell - to better understand how the genome works. A better understanding of chromatin will yield important insights into the genome's working parts and how those parts are managed.

Chromatin influences gene activity in a cell by controlling access to the genes and regulatory proteins that make the genome work. Chemical tags that stick to the DNA impact chromatin organization and which genes are switched on and off. Chromatin organization can also influence both normal cell development - whether a cell might become a liver, kidney or skin cell - and the onset of disease, including cancer. But chromatin is difficult to study because its make-up is different among cell types, even among cells that are similar.

Investigators from two National Human Genome Research Institute (NHGRI)-funded programs, the Encyclopedia of DNA Elements (ENCODE) project and the Centers of Excellence in Genomic Science (CEGS), have now taken steps toward solving this problem by creating maps of what chromatin looks like in individual cells. They've combined several technologies, including DNA sequencing, and have gained insights into how genomic information inside cells is controlled - literally turned on or off. The study also reveals new details about the variety of cells in an organism, including new cell subtypes. 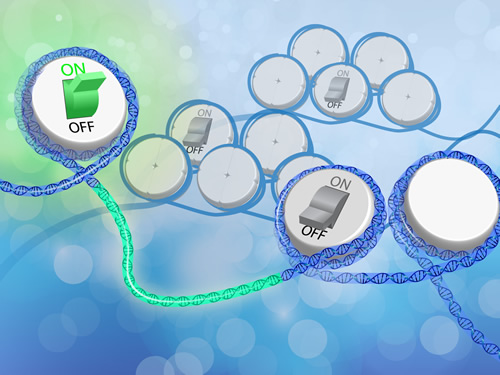 The results may further the understanding of how genomic activity is regulated in different cell types, and provide new information about how the genome's control systems affect the way genes work during normal cell development or in disease.

"By studying the chromatin organization in individual cells, it is possible to discern information about subtle differences between cells and activities occurring inside them," said Jeffery Schloss, Ph.D., director of the Division of Genome Sciences and coordinator of the CEGS program at NHGRI. "This is important because we won't understand how biology works, or what goes wrong in disease states, unless we can understand 'circuits' that set individual cell 'states,' and how they change, even within a small piece of tissue, some of which could indicate a disease condition."

While genes mostly contain instructions for creating proteins that carry out various tasks in the cell, the vast majority of the genome - roughly 99 percent - does not make proteins, but instead includes information that regulates how the genome works. Mapping chromatin in cells can identify regulatory information in the non-protein coding regions of the genome. This information - found in sequences of DNA - controls genes by turning them on and off, like a switch, but in the right environment at the right time in the cells. In some cases, the information in these switch regions differs among individuals.

"We know that the regulatory sequences - switches - are incredibly context specific. They are wrapped in chromatin and marked, and can differ from cell type to cell type. These switches are hotbeds for where variation in the genome plays a role in disease risk," said Bradley Bernstein, M.D., Ph.D., professor of pathology at Massachusetts General Hospital and Harvard Medical School in Boston, who led the work.

In the study, Dr. Bernstein and his colleagues set out to investigate how different cells or types of cells regulate gene activity at a given point in time or over time.

The investigators combined chromatin mapping techniques with recent innovations in technologies to examine single cells. They labeled chromatin from thousands of cells, and isolated single cells and sequenced their DNA, creating profiles of chromatin in each cell. They then identified groups of related single-cell profiles, which were then subdivided into profiles of smaller cell subgroups.

They also demonstrated that these techniques could detect known differences in the epigenomes - the extra layer of chemical compounds that dot the chromatin and can tell the genome what to do - among three types of cells: mouse embryonic stem (ES) cells, embryonic fibroblasts and hematopoietic progenitors. They combined hundreds of individual cell measurements to create chromatin maps for each cell type.

"We found that some of the stem cells showed early signs of being ready to develop into different types of cells," Dr. Bernstein said. "At the other end, some were in a very undeveloped state."

Gauging the levels of this ability - called pluripotency - in a cell helps researchers understand cell development. Stem cells lose pluripotency potential as they proceed along a particular developmental path - for example, to becoming a heart, kidney or skin cell.

The findings suggest a great deal of "constant change in regulatory switches within cells," Dr. Bernstein said. "It ultimately will allow us to better understand those regulatory dynamics occurring at these switches and might help us understand how cells decide their fate."