Without a doubt, this is the most important, most wondrous map ever produced by humankind.

The signature goal of the Human Genome Project (HGP) was to generate a sequence of the three billion letters (A, C, G and T) in the human DNA instruction book. The multidisciplinary, international consortium worked tirelessly towards this goal, recognizing the incredible resource it would provide for the biomedical research enterprise.

On June 26, 2000, nearly 10 years into the 13-year project, President Bill Clinton announced an important milestone for the HGP at a White House ceremony, which included comments from U.K. Prime Minister Tony Blair, who joined via video feed. That milestone was the completion of a working draft sequence of the human genome.

Standing beside President Clinton was Francis Collins, M.D., Ph.D., now the National Institutes of Health Director, who was then the director of the National Human Genome Research Institute (NHGRI) and the key leader of the HGP consortium of researchers. Also onstage was J. Craig Venter, Ph.D., founder of Celera Genomics. The joint presence of these two scientific leaders signified the agreed-upon shared success of the public HGP and private Celera Genomics efforts in generating the first draft sequence of the human genome.

As the world watched, the scientific community expressed a deep sense of accomplishment and hope. Several members of the HGP and NHGRI communities were invited to the White House to attend the ceremony. All have lifelong memories of that day. 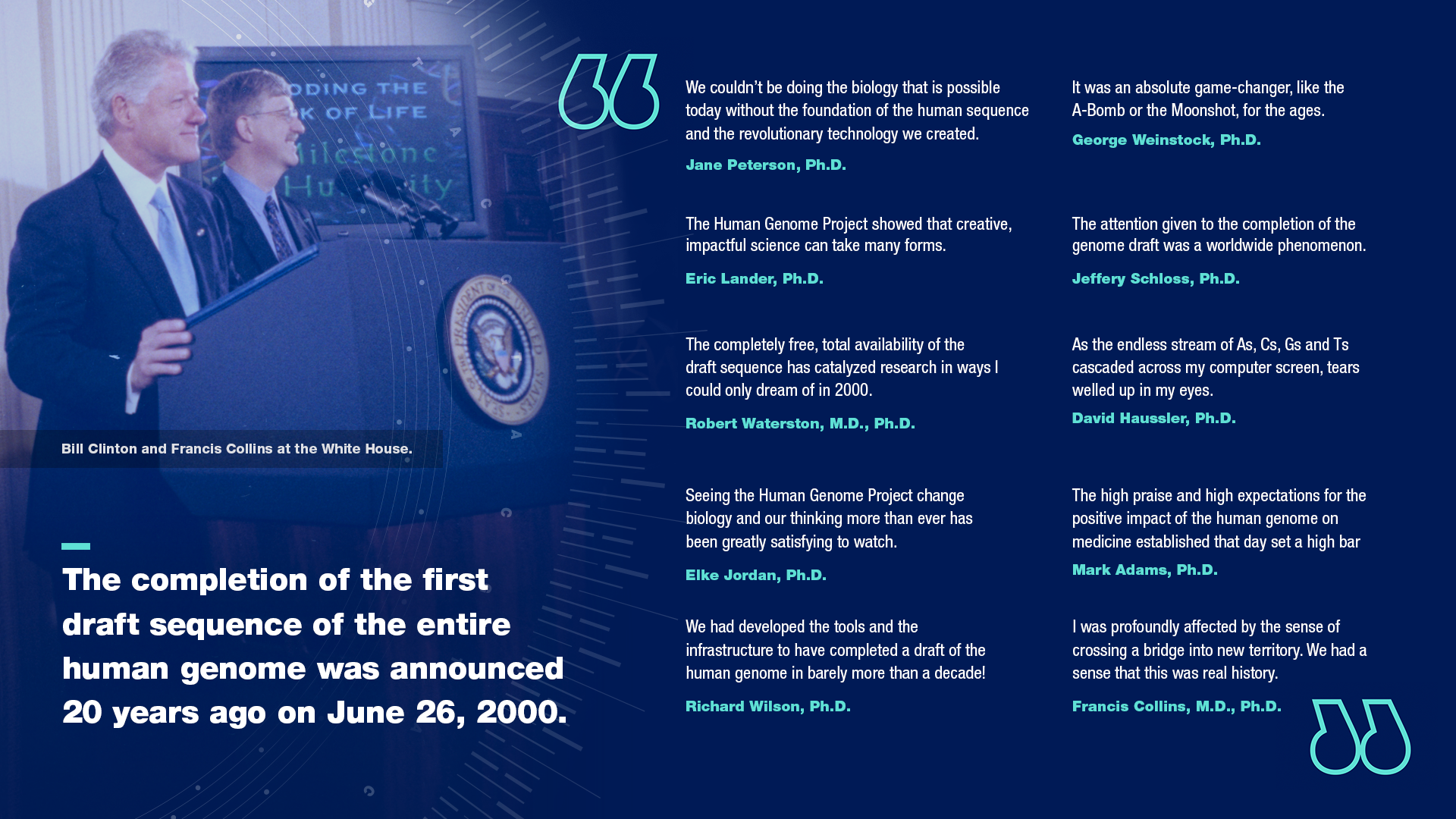 "We had done it!" reminisced Richard Wilson, Ph.D., who was co-director of the Genome Sequencing Center at Washington University School of Medicine in St. Louis at the time. "Starting from barely being able to sequence 100 kilobases of DNA per year back in 1989, we had developed the tools and infrastructure to have completed a draft of the human genome in barely more than a decade. Only one word describes how I was feeling that day—giddy!"

Jane Peterson, Ph.D., then associate director of NHGRI’s Extramural Research Program, remembered standing outside of the White House's fence before the ceremony. "No one got in early. We were all waiting outside, even Francis Collins and Craig Venter, I think," she recalled. "When we went inside, I took a towel from the bathroom—they had 'White House' printed on them!"

NHGRI former deputy director Elke Jordan, Ph.D., was also impressed by the magnitude of the event and starstruck by the President, who "passed only a few inches from me. But, needless to say, seeing the Human Genome Project change biology and our thinking more than ever has been greatly satisfying to watch," she said.

Mark Guyer, Ph.D., former NHGRI Deputy Director, was equally happy with the national scale of the announcement. “It was nice to have the work and effort put into the draft sequence be recognized by POTUS,” he said.

Many of the HGP scientists describe feelings of celebration, humility and pride over the impact of such team-based science.

"It's important to remember that the people who did the work were not elite Nobel laureates, but typical scientists who make up the backbone of our research community," said George Weinstock, Ph.D., who was then co-director of the Human Genome Sequencing Center at Baylor College of Medicine. "Ordinary scientists, and, I mean this in the best way, made extraordinary accomplishments. It shows how incredibly strong our research community is."

Unveiling the draft human genome sequence enabled researchers to begin cataloguing parts of the genome, such as genes, giving insights about human biology and foundational information for elucidating the genetic basis of human disease.

"The Human Genome Project opened people's eyes to the power of taking comprehensive views of biology, working together, and sharing data freely," said Eric Lander, Ph.D., at the time, director of the Whitehead Center for Genome Research. "It showed that creative, impactful science can take many forms."

Researchers continue to fulfill the promise of the HGP.

Scientists are advancing our ability to sequence the human genome to near-complete accuracy using remarkable technological improvements. The cost of genome sequencing is down over a million-fold, genomic data to be readily generated and shared among research groups to accelerate findings. However, these advances occurred despite some disagreements within the scientific community about the merits of the HGP.

"By the time we were in the White House, I hoped more scientists would become convinced about the power of having these large datasets," said Jeffrey Schloss, Ph.D., then an extramural program director at NHGRI. He hoped that the project would influence future researchers in the conduct of large-scale studies. "The attention given to the completion of the genome draft was a worldwide phenomenon. I had hoped it would help typically conservative scientists to reconsider their prejudices about essential ways to advance scientific knowledge. And it did," he said.

Robert Waterston, M.D., Ph.D., then the James S. McDonnell Professor and the director of the Genome Sequencing Center at the Washington University School of Medicine in St. Louis, agrees. "The completely free, total availability of the draft sequence has catalyzed research in ways I could only dream of in 2000," he said. "It shifted the debate, which had been moving to patents and privatization of data. And with companies generating human genome sequences today at scales that aren't matched by the public sector, it remains as relevant today as it was then."

David Haussler, Ph.D., of the UCSC Genomics Institute, remembers feeling a sense of a spiritual connection with all of humanity that came before, recollecting “As the endless stream of A’s, C’s, G’s and T’s cascaded across my computer screen, tears welled up in my eyes. How many of our ancestors had struggled, loved, triumphed, fallen to carry this message to us, all the way back four billion years to the primordial soup? It is their lives that recorded it, and that are recorded in it.”

But with all the achievements ensured by the completion of the draft human genome sequence, researchers knew that considerable work remained.

“The event was a celebration, but we knew that the task was not complete. Still the announcement broadcast that the competition between the public and private efforts actually helped science and progress,” said Richard Gibbs, director of the Human Genome Sequencing Center at Baylor College of Medicine.

"It felt more like a starting line – OK, now we have the sequence, what are we going to do with it?" said Mark Adams, Ph.D., a Celera Genomics scientist at the time. "The high praise and expectations for the positive impact of the human genome on medicine established that day set a high bar for the field."

Perhaps the most vivid memory of the day belongs to the person standing to President Clinton’s left at the ceremony 20 years ago, Francis Collins, who recalls that “I woke up very early that Monday morning to write my remarks. It had been a poignant weekend, as I had been asked to give the eulogy at my sister-in-law’s memorial service – she died of breast cancer. Our knowledge of the human genome didn’t come quickly enough for her. But I was profoundly affected that morning by the sense of crossing a bridge into new territory, and deeply grateful to the dedicated team of 2,400 scientists in six countries who made it all possible – and agreed to give all the data away. We had a sense that this was real history.”

Clinical applications of genomics have been a key element of the HGP since its inception. Researchers are now translating genomics knowledge into the practice of medicine, the result of 30 years of scientific and technological advances made possible by the HGP.

Likewise, the Ethical, Legal and Social Research Program, designed to be an integral part of the HGP in its fusion of science and ethics, continues to support research into the ethical, legal and social implications of genomic science.

From the very beginning, the HGP has prioritized making the benefits of genomic science available to all.Critically, genomic researchers are continuing their efforts to improve the diversity and inclusivity of research participants and the genomics workforce itself. NHGRI is working to address the lack of diverse ancestral populations in genomics research and the existing barriers that limit underrepresented populations from participating in genomics research.

Ever since the HGP ended 17 years ago, NHGRI has shaped the field of human genomics by developing strategic visions that communicate the most important advances and outline the key future objectives. The next such vision will be released in October 2020, providing guidance for the genomics community's mission and objectives at the forefront of genomics for the next 10 years.

While the "wondrous map" of the human genome laid the foundation for the field of genomics, continued research collaborations and future advancements will speak to the eventual success of the ground-breaking path broken 20 years ago.