Researchers at the National Human Genome Research Institute (NHGRI), part of the National Institutes of Health, have discovered clues to the possible cause of recurring, non-contagious fevers and sores that affect only children. Several genes have been implicated with the syndrome, known as PFAPA syndrome (Periodic Fever, Aphthous Stomatitis, Pharyngitis, Adenitis), which could lead to new treatments. The results were published in the journal PNAS this week.

The findings were made possible by the realization of commonalities with other chronic inflammatory conditions that also involved sores on the body, including the common canker sore. The study illustrates how long-standing health mysteries may now be solved when researchers discover new biological connections with the help of increasing amounts of genomic data.

In 1987, researchers first described a syndrome seen in 12 children, which was marked by recurrent fever, painful canker sores, sore throat and inflamed lymph nodes. The condition starts at an early age, between the ages of 1 and 5. The first sign is fever, accompanied by sore throat with redness and other symptoms.

Animation of a child in bed with a thermometer reading of 105° F temperature. Credit: Ernesto Del Aguila III, NHGRI.

“PFAPA syndrome is the most periodic of periodic fevers, with many children having an episode every month lasting three to five days,” said Kalpana Manthiram, M.D., Clinical Fellow at NHGRI and lead author of the study. “That is an immense burden on families since these kids cannot go to school and may be bedridden for days during flares.”

While PFAPA syndrome has become the most common recurring fever syndrome in children from Western countries, diagnosis and treatment methods have remained largely primitive and insufficient. The episodes usually spontaneously stop in pre-adolescence.

During her clinical fellowship at Vanderbilt University Medical Center from 2012 to 2015, Dr. Manthiram discovered that many cases run in families. Parents and siblings of patients tend to have frequently inflamed tonsils and canker sores, compared to relatives of people without the illness. 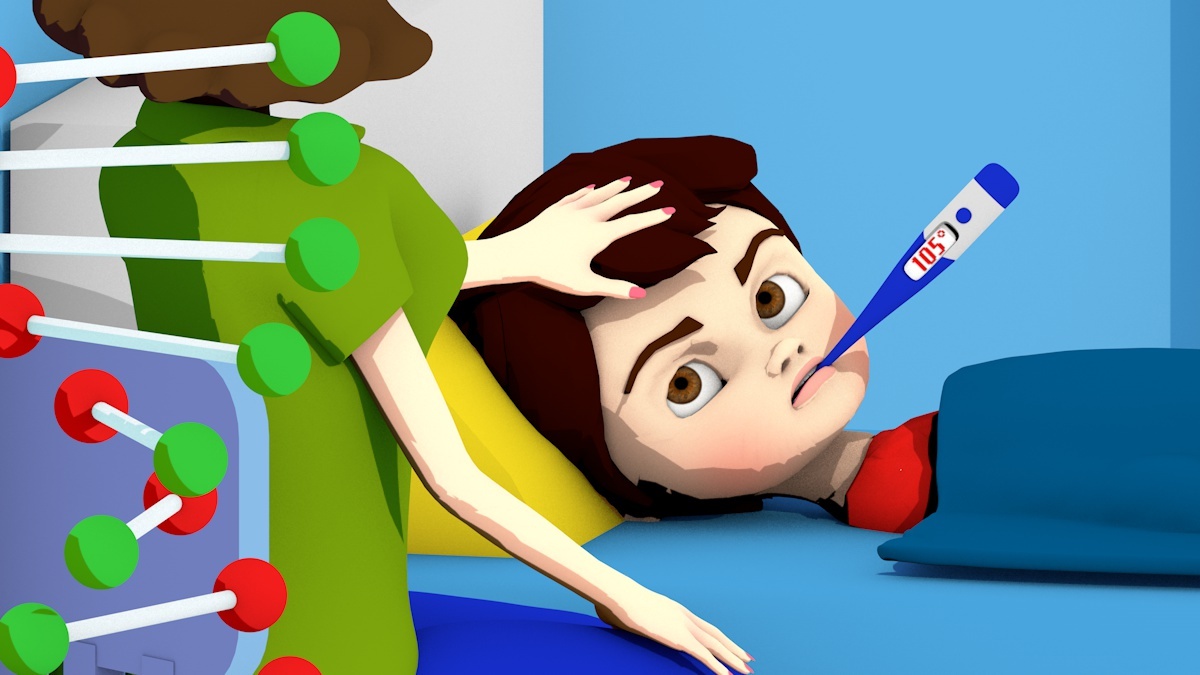 “But the biggest issue is that there is still no diagnostic test for detecting PFAPA syndrome, which means the disease is usually underdiagnosed,” said Daniel Kastner, M.D., Ph.D., senior author of the paper and NHGRI scientific director. “Identifying the disease has been mostly based on clinical history and depends on parents and doctors recognizing it. We know its time to do better than that, and consider that this study will create the scope for more accurate diagnosis of the syndrome.”

To see which genes (if any) were involved in the disease, Dr. Manthiram and her team searched for commonalities in symptoms between PFAPA syndrome and two other inflammatory diseases: Behçet’s disease, which causes inflammation of blood vessels, and canker sores.

Each illness presented itself with one common symptom – canker sores.

The group looked into whether the gene variants known to be associated with those diseases were also present in people with PFAPA syndrome by comparing patients with the disorder from European-American and Turkish ancestries with the general U.S. population. They performed more detailed analyses of six genes that are strongly linked to Behçet’s disease and canker sores.

This spectrum is clinically important because a number of patients may have symptoms that are shared between the three diseases, which could make it difficult for doctors to isolate their specific condition. According to the researchers, those patients would be better served if they were referred to having Behçet’s spectrum disorders.

Ultimately, the researchers hope that such studies on PFAPA syndrome will yield new treatment options, some of which could be drugs that are known to be effective in reducing inflammatory molecules such as IL12.

“Our next goal is to do a larger study and see what other genes might play a role in PFAPA syndrome and to understand what makes the disease special, which should make it more easily diagnosable,” Dr. Manthiram said. “We hope that eventually children don’t have to experience such painful disruptions for years and that clinical trials and other follow-up tests can lead to a successful treatment plan.”