The "bunny ear" hypothesis: How defective DNA looping may contribute to cancer

Chemotherapy May Be A Useful Treatment

This Genome Advance of the Month highlights a landmark study in Nature that describes what happens when two genetic neighborhoods merge in brain tumor cells. Researchers found that one gene came under the control of a gene control switch from a different genetic neighborhood, turning on a cancer-growth gene. The research team was led by Bradley E. Bernstein, M.D., Ph.D., of the Broad Institute who is also a member of the Encyclopedia of DNA Elements (ENCODE) Consortium, founded and funded by the National Human Genome Research Institute (NHGRI).

Gliomas are the most common type of brain tumor in adults, but these tumors are difficult to treat. The research team noticed that up to 80 percent of low- and moderate-grade gliomas had a mutation in a common gene called isocitrate dehydrogenase, or IDH. This puzzled the scientists, as IDH, a housekeeping gene involved in energy production, seemed to have no relevance to cancer. Dr. Bernstein and his colleagues found that when the IDH gene was mutated, particular portions of the cancer cells' DNA became studded with chemical tags called methyl groups. Just as if your shoelace was covered in thorns, these tags were disrupting the way the DNA was folded, causing genetic neighborhoods to merge. 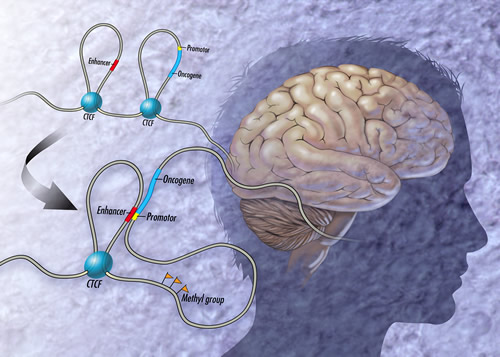 Within the tumors that have a mutated IDH gene, scientists found that two loops of particular interest, which normally form distinct neighborhoods, became merged. In one of these genetic neighborhoods, a gene called PDGFRA makes cells grow, or increase in number, but is rarely turned on. However, when the PDGFRA loop merges with an adjacent loop because of the methyl tags caused by the mutated IDH gene, PDGFRA comes under the control of a different DNA segment that turns the gene on continuously. These cells can then overgrow, or divide uncontrollably, and are likely to contribute to cancer progression.

This discovery suggested that a potential treatment could be to restore the separation between each genetic neighborhood, as if the gates to each neighborhood were closed again. Researchers tested this hypothesis by adding 5-Azacytidine, a chemotherapy drug that disrupts formation of methyl tags, to glioma cells. With these tags gone, the DNA loops reformed and each genetic neighborhood became autonomous again. The cancer-growth gene was also turned off, as it was now properly controlled by its own neighborhood where it is rarely turned on.

This exciting discovery indicates that chemotherapy drugs like 5-Azacytidine may be useful for treating gliomas and other cancers where methyl tags play a role, such as liver cancers, sarcomas, colon cancers, bladder cancers and leukemia. Future studies are looking towards detecting the presence of these methyl tags, hopefully allowing clinicians to treat patients earlier, before the cancer spreads and becomes unmanageable. 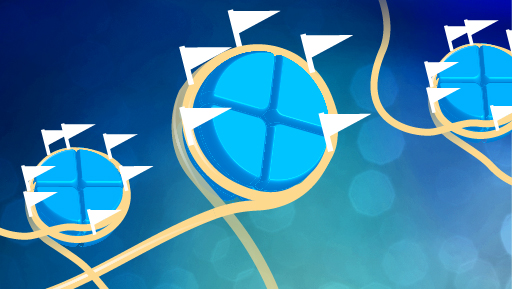