To build a goldfish, start with a blueprint

Scientists drafted the blueprint for how to build a common goldfish. Now they'll use it to find out what gives ornamental goldfish their nuanced features, gaining insight into human health.

A fish is a fish, right? Not when it comes to comparing its genome to that of humans.

Shawn Burgess was out for a drink with a friend when the conversation turned to the utility of studying animal genes to gain insight into human health and evolution. In a field of research called comparative genomics, researchers compare genomes between animals, even humans. When researchers sequence DNA, they figure out the DNA's code. That is the blueprint for life.

Dr. Shawn Burgess, a geneticist at the National Human Genome Research Institute, works with zebrafish. He wanted to compare their genome to closely related species to better understand how genes are organized. But most sequenced fish are far distant relatives. Comparing their genomes is not much better than comparing genomes between zebrafish and humans. So, Burgess and his friend honed in on the goldfish, a close cousin to the common carp.

The goldfish and common carp diverged into two separate species approximately 60 million years ago, a similar distance as between mice and humans. The common carp's DNA was already sequenced. Together, the common carp and goldfish genomes would be useful in comparative genomics and also add value to the zebrafish genome. So, his friend made an offer: I'll give you the goldfish DNA if you figure out the code. 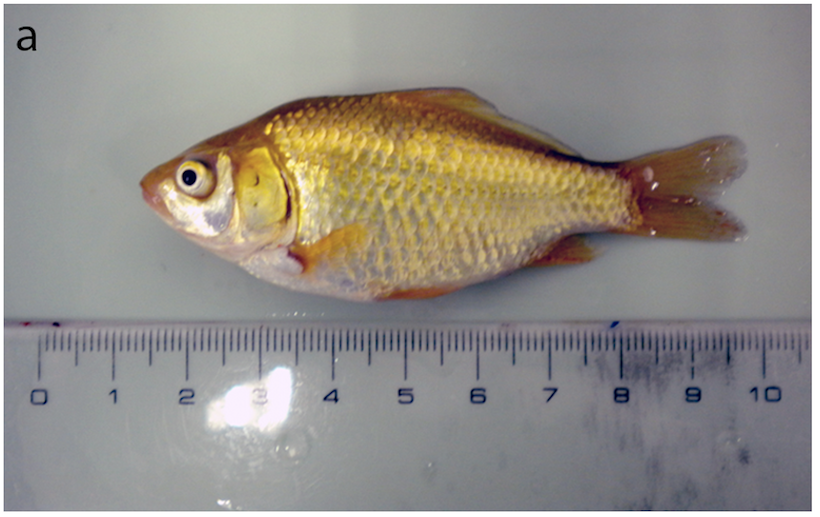 On June 24 Burgess' team published the complete goldfish genome in the journal Science Advances. It took 15 people about a year. That's a small fraction of the time it took for thousands of researchers to complete the decade-long Human Genome Project.

DNA sequencing has come a long way since the completion of the Human Genome Project in 2003. With new technology, it is faster and more affordable. Burgess' team used a tool called a PacBio RS II sequencer to read the 2 billion chemical letters in goldfish DNA. For comparison, the human genome has 3 billion. When the PacBio sequencer became available in 2011, Burgess knew it was a game-changer. In one pass, it can sequence longer continuous strands of DNA. With fewer, but larger pieces of DNA, the assembly process is more straightforward - like trying to assemble a 50 piece puzzle versus a 50,000 piece puzzle. 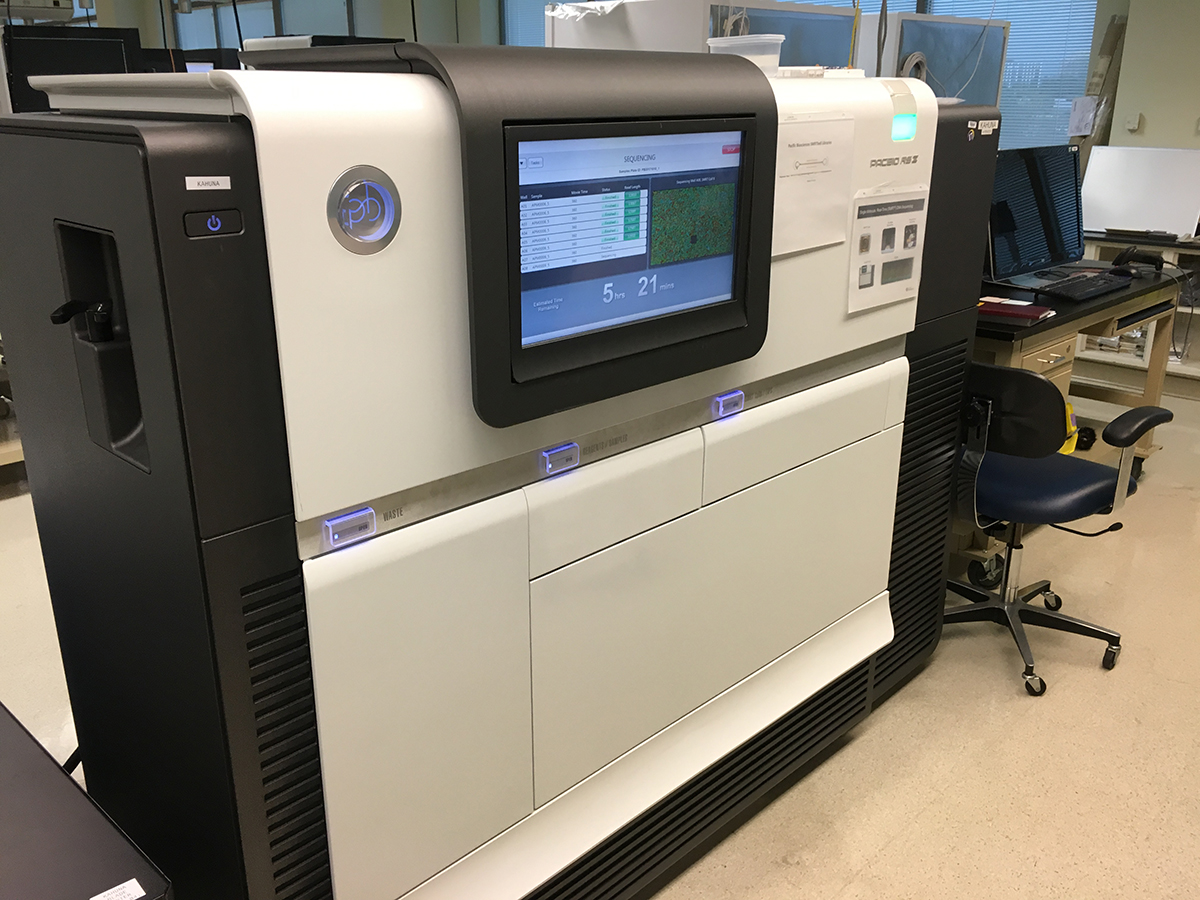 Sequencing the goldfish DNA opens research opportunities for the scientific community at large. The entire sequence is available online. Burgess calls it, "the foundation for the exciting science."

On a basic level, DNA codes for proteins. Those proteins function as micro-machines doing all types of work in cells of the body. DNA also codes for when to turn the production of micro-machines on and off. For example, a liver protein is not built in the brain. That production is turned off. If it weren't, then that would be odd and likely problematic.

Researchers today can often find problems in DNA if they manifest in a changed protein. If a protein is built wrong, then it won't do its job correctly. A change in the DNA code, or blueprint, causes this. But, according to Burgess, "we aren't as good at finding a sequence in the genome that controls how you turn a gene on or off. What are the rules?"

Burgess adds that comparing goldfish and carp genomes will help them understand those rules - the gene regulatory system. In other words, they'll look for how the blueprint tells the body when to build some micro-machines and not others.

Humans don’t have gills, but Burgess says we still have some similarities with fish. The 300 million years of evolutionary separation between us and goldfish is close enough for comparison. For example, celestial eye goldfish have eyes that gaze upward. Researchers could identify the goldfish gene for eye positioning. If they find the same gene in the human genome, then a reasonable first guess is that gene also affects eye positioning in humans. Other examples range from skin color to more severe conditions like genetic diseases.

Linking genes to the characteristics they code for would go a long way in solving problems that arise from genetic mutations. To find those links, researchers perform studies on animals that they can't do on humans. Imagine a laboratory study where researchers manipulate or remove a gene from an animal. Researchers use this "knockout" technique to study how genes affect animals. Yet Burgess says that studying animals just to understand human disease is, "a narrow view of well-being." Understanding evolution and the interdependence between plants and animals is a value-add.

"I love how a stretch of DNA, which really is just four different letters, can be changed and result in essentially an incredibly huge spectrum of animals and plants and in anything alive. I find it remarkable," Burgess said.

The goldfish genome will be a tool for understanding how genes evolve for two reasons. First, goldfish have a long history of human genetic intervention, dating back at least 1,000 years. Throughout Asia, goldfish were raised as ornamental pets. They were bred to have attractive features such as fancy patterns or a double tail. With all that selective breeding, there are now more than 200 goldfish variants. 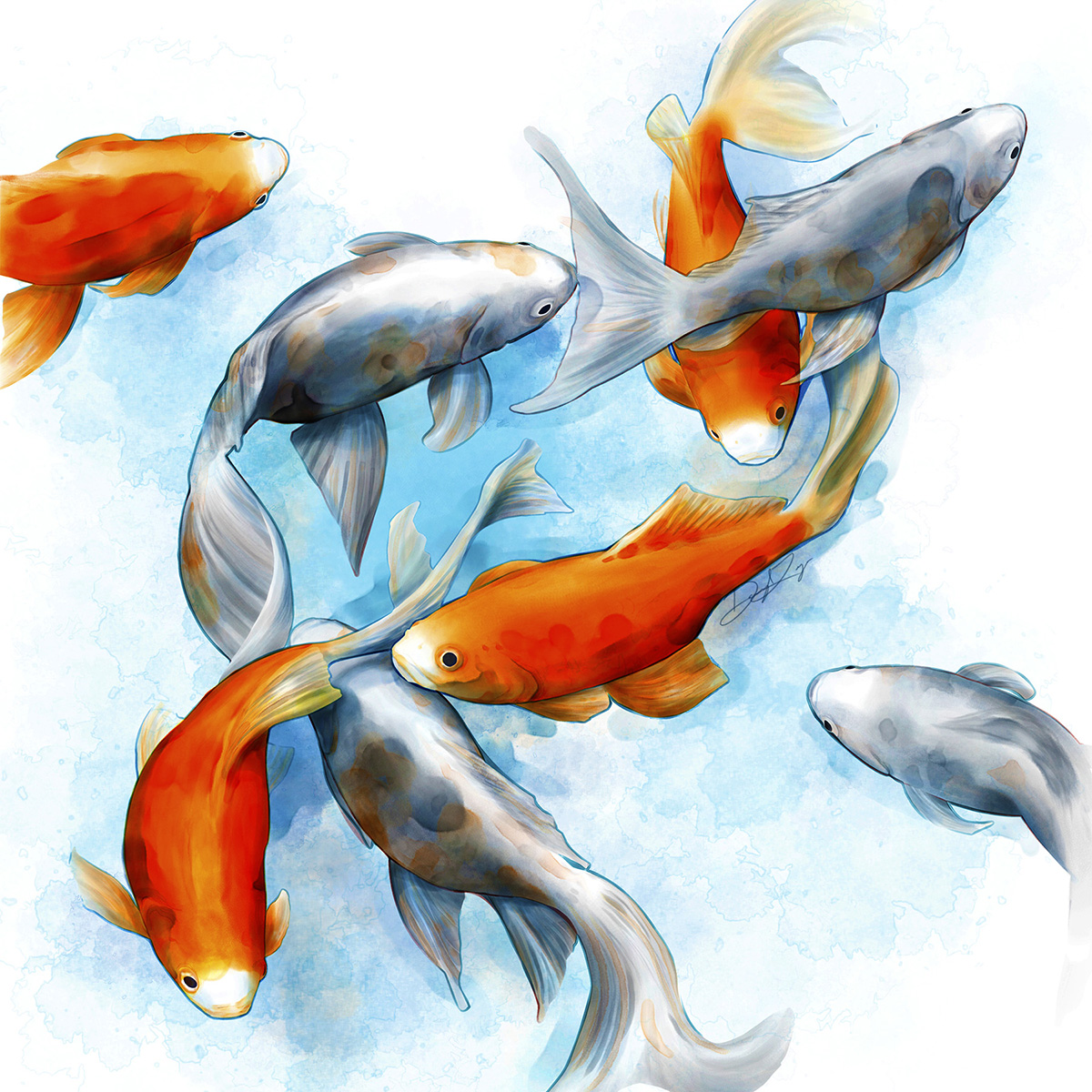 Second, the goldfish (and its cousin the common carp) went through a ‘whole genome duplication' after evolutionarily "splitting off" from zebrafish. Now, having four copies of every gene instead of two allows for one copy to change and evolve without harming the fish. This can result in lost genes or new functions for genes. This is a natural complement to ‘knockout' laboratory studies. 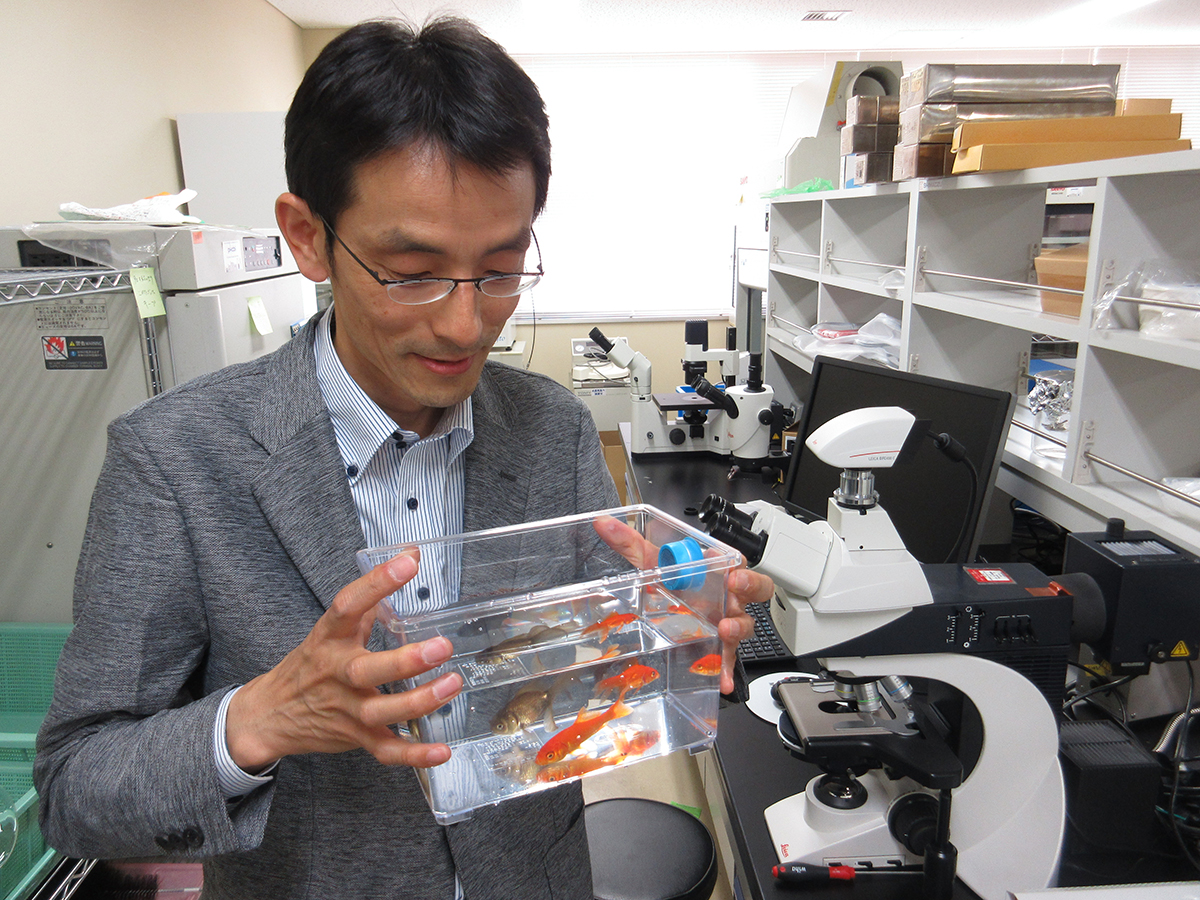 Add in the common carp genome with its own ornamental varieties (known as koi), and there are plenty of avenues of comparison to provide researchers with a window into how genes change during evolution.

Back in the lab, Burgess is amazed every time his colleague Dr. Zelin Chen says, "Look what we found here." Chen compares the goldfish to the carp by analyzing the genomic data. Already he has found genes that changed function. It takes a lot of computational work and sometimes weeks of trying to sort out where a gene is and how it may be changing. Still, Chen's findings affirm why they wanted to sequence the goldfish. 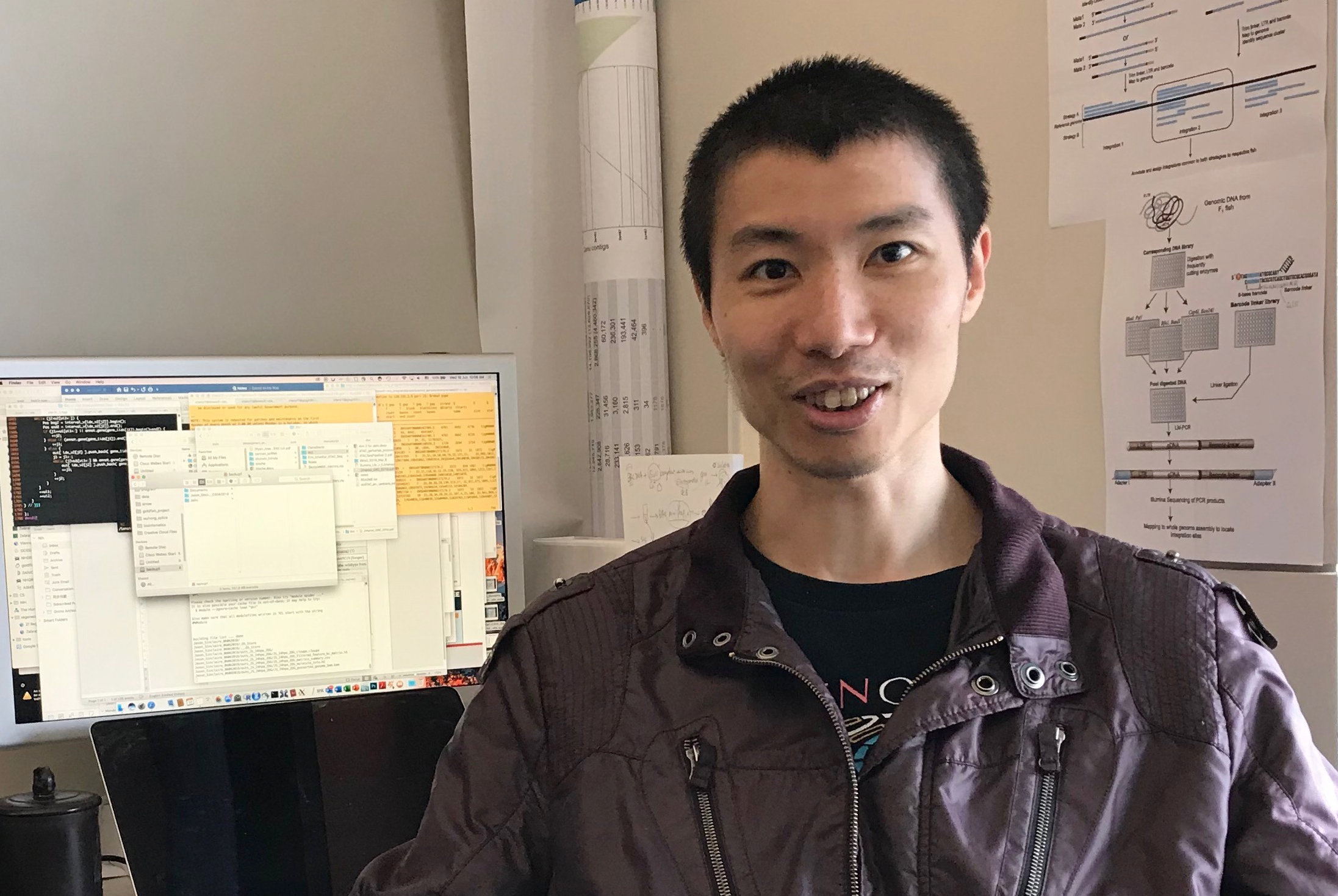 "Those are exciting moments," Burgess said, "We guessed we could do this. But when he showed we could actually do it, that is incredibly gratifying."

With the goldfish genome available online, Burgess is optimistic about the "exciting science" to come.

"What is important for both our health and our long term survivability," he said, "is an understanding all the animals in an ecosystem and the broader web of life."