A computer scientist’s quest to complete a critical genomics puzzle

After a lifelong obsession to complete things, Adam Phillippy has helped finally complete a human genome sequence. The researcher talks about his life path to genomics, his relationship with perfection and his next big thing.

Adam Phillippy admits that he hasn’t taken a biology class since his freshman year of high school. During our interview, he appears over the video call laughing and sitting comfortably at home in a hoodie. Phillippy and his younger daughter Hannah recently became internet famous when her review of his Ph.D. thesis went viral. While she was surprised it took him “four whole years to write,” she declared herself “amazed” by his work.

She is not the only one.

“He had an unusual background, and he didn’t look like the typical candidate,” says Daniel Kastner, M.D., Ph.D., former scientific director of the National Human Genome Research Institute (NHGRI), who helped recruit Phillippy to the institute in 2015.

“He’s been incredibly productive and imaginative in the things he’s done and created. We’re extraordinarily lucky to have him on our faculty.”

Phillippy, along with other computational scientists and biologists, is piecing together one of the most complex puzzles in genomics: the first truly complete human genome sequence.

He chats amicably about his team’s new findings and innovations that are actively changing the face of genomics research. Phillippy, a senior investigator and self-described perfectionist in the NHGRI Intramural Research Program, is still early in his career, but his accomplishments have already changed the way genomic scientists across the world approach genome sequencing.

Relying on his early training as a computer scientist, Phillippy’s work focuses on building and using computer software that parses and reassembles the pieces of DNA sequence that represent the human genome, our biological instruction manual. This work requires remarkably close attention to detail.

“Ever since I was a little toddler, I've been obsessed with completion,” Phillippy says, laughing. “My mom tells me that as a child, I used to cry when my cookies were broken because I needed the cookie to be whole.”

Phillippy comes from a long line of chocolatiers, who were equally invested in confectionary completion.

Hailing from Hershey, Pennsylvania, Phillippy’s paternal grandfather was an engineer at the Hershey factory, where he and his brothers worked on the Hershey kiss-wrapping machine, among other things. (You can find a feature in the Hershey Museum dedicated to the Phillippy brothers and their contributions.)

Phillippy’s maternal grandfather was a chemist at the factory. Examining and working on nitty-gritty details seemed like the Phillippy family’s specialty.

Phillippy’s foray into the field of genomics began as a series of fortunate events. It started when he was studying computer science as an undergraduate at Loyola College (now Loyola University) in Baltimore.

“I knew that I was good at computer programming. I liked it, and it came easily to me,” he says. “This is why I expected to go to school to become a programmer.”

The first coincidence on Phillippy’s career path was meeting Arthur Delcher, Ph.D. At that time, Delcher was the chair of the computer science department at Loyola College but moonlighted after hours as an engineer at Celera Genomics.

There, he was building a genome sequencing assembly tool that would eventually be used to stitch together the first draft human genome sequence released by Celera Genomics.

When Delcher announced in class that he needed an undergraduate research assistant to help with DNA sequence assembly, Phillippy raised his hand.

Perhaps it was some innate interest in DNA that motivated Phillippy to volunteer. His father was an astronomer and grade school biology teacher who fostered Phillippy’s curiosity, often bringing home science news from school to share with his son.

“I have memories of my father telling me about DNA and how cool it was, and this was in the early 1980s when people were just starting to talk about doing a Human Genome Project,” Phillippy says. “So, I did kind of have that exposure early on and it was a curiosity of mine, but I didn't ever imagine it becoming my career.”

Those memories resurfaced, and Phillippy’s career path shifted, as he assisted Delcher as a summer research fellow at Loyola College. Instead of the dry memorization that he associated high school biology classes with, the field of genomics opened a door to a world of puzzles and unsolved questions that challenged and delighted him.

During his fellowship at Loyola College, Phillippy developed software to help researchers correctly stitch together short sections of sequenced DNA into a continuous stretch.

Meanwhile, the international consortium of researchers involved in the Human Genome Project was trying to create the first draft of the human genome sequence piece by piece. Thousands of researchers across the globe painstakingly provided pieces of the puzzle to contribute to that consortium. The software that Phillippy helped to build became a vital piece of that groundbreaking international project, making it easier to complete the arduous process of putting the human genomic puzzle together.

He excelled at Loyola College. In a second foundational moment of his career, Delcher introduced Phillippy to Steven Salzberg, Ph.D., a renowned computational biologist at The Institute for Genomic Research.

In 2000, the field of genomics was still small and close-knit. As researchers worked to complete the Human Genome Project, Phillippy remembers discussing the results with Delcher, Salzberg and other prominent genomics researchers.

“That was a real formative memory for me, watching these people discuss the initial analyses of the human genome sequence,” Phillippy says. “Everybody understood the significance of the moment, seeing stuff that nobody had ever seen before. Being in that environment really sparked my interest in the field.”

For several years, Phillippy and Salzberg worked closely on genome sequence assembly and analysis. Eventually, Salzberg left for a position at the University of Maryland, College Park, and Phillippy followed him there to complete his doctorate degree.

From code to completeness

After completing his Ph.D., Phillippy began a bioinformatics program with the U.S. Department of Homeland Security in response to anthrax attacks on members of Congress several years earlier.

He analyzed the genome sequences of microbial pathogens and developed tools that would help investigators trace the origins of future infectious disease outbreaks. When someone received a mysterious envelope of white powder in the mail, Phillippy and his lab were there to figure out what it was and where it came from by analyzing its genome.

After a few years, Phillippy realized that he wanted to explore other biological avenues. He decided to leave the U.S. Department of Homeland Security in search of other problems to solve.

That search led Phillippy to join the Intramural Research Program at NHGRI in 2015, where he founded the Genome Informatics Section in the Computational and Statistical Genomics Branch. At NHGRI, he had the opportunity to expand his work into the study of vertebrate genomes, including the human genome, and to continue his work improving the assembly of genome sequences.

Fifteen years since helping to build software that helped make the Human Genome Project’s goal a reality, Phillippy ended up at one of the key origins of the project – NHGRI.

When Phillippy first applied to NHGRI, his application included a goal that seemed like a long shot at the time: to fully complete the human genome sequence. The gaps in the reference human genome sequence had always bothered him; the long stretches of “Ns” in thatsequence represented missing sections and were begging to be filled in.

“It was an extra-credit type of thing to him,” remembers Kastner. “You know, ‘I’ll do this and this and then, if I have some spare time on my hands, I’ll complete the human genome sequence.’”

Phillippy’s lifelong obsession to complete things bubbled to the surface and led to the creation of the Telomere-to-Telomere (T2T) consortium, an international effort that he co-founded with his close collaborator Karen Miga, Ph.D., to complete the human genome sequence without gaps.

The remaining gaps in the human genome sequence were in some of the densest, most difficult-to-traverse parts of the genome. However, in the years since the Human Genome Project ended, scientists had built better, more accurate DNA sequencing methods. After a few years at NHGRI, Phillippy knew that the time was right to complete a human genome sequence.

Even in a pandemic that eliminated the possibility for researchers to gather in-person to hash out such details, Phillippy and the rest of the Telomere-to-Telomere Consortium were determined. By the summer of 2020, only a few gaps remained, and the researchers in the consortium organized one last push to get it all done.

That push exceeded expectations. Phillippy says the consortium surprised themselves by how quickly everything came together. After a concerted effort between experimental and computational biologists, they released the initial revised assembly of the human genome sequence in September 2020. Now — just over a year later — the final, validated and truly complete sequence is being released.

There are still myriad puzzles to be solved in genomics. Phillippy is as motivated as ever to fill in other gaps in our understanding.

He has visions of complete human genome sequencing at a low cost that is available to everyone. Phillippy wants these sequences to be paired with the analytical tools that help us understand how such sequences can be used to improve human health efficiently and equitably.

According to Miga, “A gapless human genome reference will reflect how a global genomics community came together to answer the call of making diversity and inclusion front and center in their work.”

Others believe his work has also paved the way for improving human health in clinical practice.

“Dr. Phillippy’s accomplishments in completing the human genome sequence will monumentally improve our understanding of genomic regions related to human diseases and variations,” says Seema Lalani, M.D., professor of molecular and human genetics at Baylor College of Medicine. “Having a better human genome reference sequence will make all the difference in diagnosing patients, especially those with unresolved genetic conditions.”

Until recently, that goal was hard to envision, but Phillippy’s work over the course of his career — along with the work of countless researchers who have contributed, piece by piece, to such a gigantic undertaking — has helped bring it within reach.

The field of genomics is constantly changing, evolving and expanding into spaces that were previously unknown. For a genomics researcher, there’s never a dull moment.

“Every day, you’re encountering a new problem, and new technologies are available that you can use to answer your questions,” Phillippy says. “That energy has been there since the beginning of my career and keeps me happy to go to work every day.” 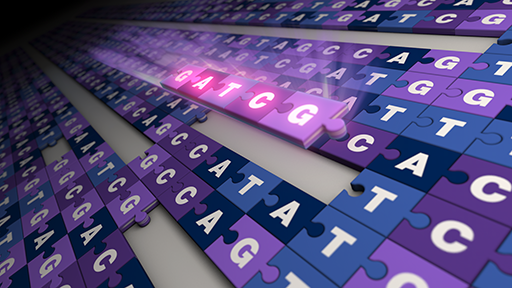