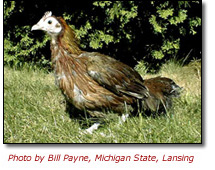 BETHESDA, Md., Wed., Dec. 8, 2004 - An international research consortium has found that chickens and humans share more than half of their genes, but that their DNA sequences diverge in ways that may explain some of the important differences between birds and mammals. The consortium's analysis is published in the Dec. 9 issue of the journal Nature.

The International Chicken Genome Sequencing Consortium analyzed the sequence of the Red Jungle Fowl (Gallus gallus), which is the progenitor of domestic chickens. The National Human Genome Research Institute (NHGRI), part of the National Institutes of Health, provided about $13 million in funding for the project, which involved researchers from China, Denmark, France, Germany, Japan, Poland, Singapore, Spain, Sweden, Switzerland, the United Kingdom and the United States.

The chicken is the first bird, as well as the first agricultural animal, to have its genome sequenced and analyzed. The first draft of the chicken genome, which was based on 6.6-fold coverage, was deposited into free public databases for use by researchers around the globe in March 2004. Over the past nine months, the consortium carefully analyzed the genome and compared it with the genomes of organisms that have already been sequenced, including the human, the mouse, the rat and the puffer fish.

"The chicken genome fills a crucial gap in our scientific knowledge. Located between mammals and fish on the tree of life, the chicken is well positioned to provide us with new insights into genome evolution and human biology," said NHGRI Director Francis S. Collins, M.D., Ph.D. "By comparing the genomes of a wide range of animals, we can better understand the structure and function of human genes and, ultimately, develop new strategies to improve human health."

In their paper published in Nature, members of the International Chicken Genome Sequencing Consortium report that the chicken genome contains significantly less DNA than the human genome, but approximately the same number of genes. Researchers estimate that the chicken has about 20,000-23,000 genes in its 1 billion DNA base pairs, compared with the human count of 20,000-25,000 genes in 2.8 billion DNA base pairs. The difference in total amount of DNA reflects a substantial reduction in DNA repeats and duplications, as well as fewer pseudogenes, in the chicken genome.

About 60 percent of chicken genes correspond to a similar human gene. However, researchers uncovered more small sequence differences between corresponding pairs of chicken and human genes, which are 75 percent identical on average, than between rodent and human gene pairs, which are 88 percent identical on average. Differences between human and chicken genes were not uniform across the board, however. Chicken genes involved in the cell's basic structure and function showed more sequence similarity with human genes than did those implicated in reproduction, immune response and adaptation to the environment.

The analysis also showed that genes conserved between human and chicken often are also conserved in fish. For example, 72 percent of the corresponding pairs of chicken and human genes also possess a counterpart in the genome of the puffer fish (Takifugu rubripes). According to the researchers, these genes are likely to be present in most vertebrates.

"Genomes of the chicken and other species distant from ourselves have provided us with a powerful tool to resolve key biological processes that have been conserved over millennia," said Richard Wilson, Ph.D., of Washington University School of Medicine in St. Louis, the consortium's leader and senior author of the Nature article. "Along with the many similarities between the chicken and human genomes, we discovered some fascinating differences that are shedding new light on what distinguishes birds from mammals."

Like all birds, chickens are thought to have descended from dinosaurs in the middle of the Mesozoic period and have evolved separately from mammals for approximately 310 million years. Chickens were first domesticated in Asia, perhaps as early as 8000 B.C.

As might be expected, genomic researchers determined that chickens have an expanded gene family coding for a type of keratin protein used to produce scales, claws and feathers, while mammalian genomes possess more genes coding for another type of keratin involved in hair formation. Likewise, chickens are missing the genes involved in the production of milk proteins, tooth enamel and the detection of hormonal substances called pheromones, which researchers say may mirror the evolution of the mammary glands and the nose in mammals and the loss of teeth in birds. But other results of the analysis caught even the researchers by surprise.

The analysis showed that a group of genes that code for odor receptor proteins is dramatically expanded in the chicken genome - a finding that appears to contradict the traditional view that birds have a poor sense of smell. And, as it turns out, birds might not have such a great sense of taste. When compared with mammals, chickens have a much smaller family of genes coding for taste receptors, particularly those involved in detecting bitter sensations.

Other intriguing findings from the Nature paper include:

Besides providing insights into gene content and evolution of genes, the consortium's analysis offers new perspectives on the evolution of portions of the genome that do not code for proteins. Less than 11 percent of the chicken genome consists of interspersed segments of short, repetitive DNA sequences, compared with 40 to 50 percent of mammalian genomes. With genes comprising another 4 percent of the chicken genome, researchers say that leaves them with no explanation for the function of more than 85 percent of the chicken genome. They hypothesize this genetic "dark matter" may contain previously unrecognized regulatory elements, but also may include ancient DNA repetitive elements that have mutated beyond recognition. Furthermore, researchers said it appears that the 571 non-coding RNA "genes" that they identified in the chicken genome may use different duplication and/or translocation mechanisms than do regular protein-coding genes, opening the door to a whole new realm of scientific inquiry.

In addition to its tremendous value as a resource for comparative genomics, the chicken is widely used in biomedical research. It serves as an important model for vaccine production and the study of embryology and development, as well as for research into the connection between viruses and some types of cancer.

Recent outbreaks of avian flu have accelerated agricultural researchers' interest in learning more about the chicken genome and how genetic variation may play a role in susceptibility of different strains to the disease. The chicken genome sequence will also serve as a resource for researchers seeking to enhance the nutritional value of poultry and egg products. Furthermore, as the first of 9,600 species of birds to have its genome fully sequenced and analyzed, the chicken genome will help to further understanding of avian genomics and biology in general.

To download a high-resolution photo of the Red Jungle Fowl, go to: http://www.genome.gov/dmd/img.cfm?node=Photos/Animals/Red Jungle Fowl&id=2120.

For more on the rapidly growing field of comparative genomic analysis, go to: http://www.genome.gov/11509542/comparative-genomics-fact-sheet/. To read the white paper outlining the scientific rationale for sequencing the chicken genome, go to: www.genome.gov/sites/default/files/genome-old/pages/Research/Sequencing/SeqProposals/Chicken_Genome.pdf.

NHGRI is one of the 27 institutes and centers at the National Institutes of Health, which is an agency of the Department of Health and Human Services. The NHGRI Division of Extramural Research supports grants for research and for training and career development at sites nationwide. Additional information about NHGRI can be found at www.genome.gov.