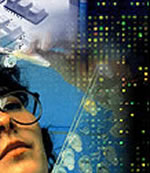 The National Human Genome Research Institute (NHGRI) plans to offer up to $5.75 million in new funding opportunities to support the development and use of novel analytical methods and efficient high-throughput technologies to comprehensively characterize the organization and function of genomes.

Letters of intent are due July 2, 2011 and applications are due August 2, 2011 by 5 p.m. local time of the applicant organization. Funding will be awarded approximately April of fiscal year 2012.

The current high-quality catalogs — which include DNA sequences in the genome that carry the instructions and determine which genes are turned on and off at various times in different cells — are widely used by the biomedical research community to understand how the genome functions and, in time, may enable the discovery of much-needed cures and treatments.

Each project analyzes a variety of cell types for a given organism. The use of multiple cell types is a key to obtaining a comprehensive description of the functional elements in genomes. However, limitations in technology prevent the application of all possible analysis methods to all cell types of interest. Technology breakthroughs might allow ENCODE and similar projects to achieve true comprehensiveness.

In 2007, ENCODE findings from the pilot project (See: New Findings Challenge Established Views on Human Genome) challenged the traditional view that most of the genome's interesting (consequential) "action" is located at or near the protein-coding regions of genes and revealed a striking complexity in the organization of the genome. It pointed to an intricate network in which genes, along with regulatory elements and other types of DNA sequences that do not code for proteins, interact in overlapping ways.

The modENCODE project takes advantage of many of the same tools and has developed new ones to apply to the smaller - genomes of the fruit fly and the roundworm. Unlike research on the human genome, modENCODE researchers can conduct genetic experiments on flies or worms to validate the biological relevance of the functional elements they have identified.

"New technologies have been critical to the success of projects like ENCODE and modENCODE and now, in addition to improved technologies, we need ground-breaking validation methods that help researchers understand the role that functional elements play in health and disease, " said Mike Pazin, Ph.D., program director for NHGRI's functional analysis program.