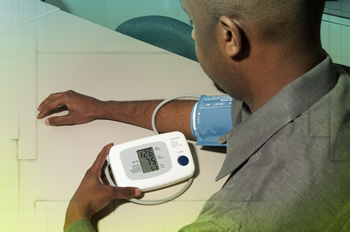 Bethesda, Md., Thurs., Dec. 12, 2013 - In a study of African-American men, researchers from the National Institutes of Health found that boys who grew up in two-parent homes were less likely to have high blood pressure as adults compared to those raised by a single parent. Reported in the Dec. 12, 2013, issue of the journal Hypertension, this is the first study of an African-American population to document an association between childhood family living arrangements and blood pressure.

"Family structure is among a slew of environmental influences that, along with our genes, help determine our health as adults," said Dan Kastner, M.D., Ph.D., scientific director, National Human Genome Research Institute (NHGRI). "This study makes important observations about home life that may affect susceptibility to complex diseases later on in life."

Researchers from NHGRI and the National Institute on Minority Health and Health Disparities (NIMHD), both parts of NIH, conducted the study.

The researchers analyzed blood pressure rates and the incidence of hypertension, a persistent state of high blood pressure, in a group of 515 African-American men enrolled in the Howard University Family Study (HUFS). The NIH-funded study conducted in the 2000s produced a repository of health history information about a group of African-American families from the Washington, D.C. metropolitan area.

According to the study, African-American men who grew up in a household with both parents had a significantly lower blood pressure as adults compared with African- American men who grew up in a household with a single parent, regardless of whether the parent was a mother or father. The researchers saw the most positive health effects in men who lived with both parents for one to 12 years. This group of adults had a 46 percent lower chance of being diagnosed with hypertension compared to adults who for those years were raised by a single parent.

About one-third of U.S. adults suffer from hypertension. The burden is considerably greater in the African-American community, in which the condition affects 39 percent of men and 43 percent of women.

Among several possible explanations for their findings, the researchers offered that compared with children who reside with two parents, those who live with their mothers alone are about three times more likely to live in poverty. Other studies have linked blood pressure rates with socioeconomic aspects of childhood, including household income and parents' education and occupation.  "The findings reported in the current study may be explained by these unmeasured childhood socioeconomic factors," said Debbie Barrington, Ph.D., the lead author and an NIMHD senior research fellow.

"Being raised by a single parent really puts kids at a disadvantage in terms of resources that would be available to them," said Charles Rotimi, Ph.D., co-author and senior investigator in NHGRI's Inherited Disease Research Branch and director of the trans-NIH Center for Research on Genomics and Global Health (CRGGH). "Our study is not an indictment of single-parent homes. Single parents, however, may struggle more to keep things together, and this may be impacting children in ways that later manifest as adult onset diseases."

The authors suggest that living with both parents early in life may represent a critical opportunity when children develop biologically protective mechanisms that last throughout life. In an attempt to shed light on the potential molecular mechanisms, the investigators are conducting research to understand the role that incremental DNA fine tuning, or epigenetics, impacts the way various cells behave or are transformed throughout the lifespan of an individual.

More research is needed in different settings to confirm that family living arrangements negatively affect children's health outcomes later in life.  The researchers hope their study will be replicated on a larger scale in populations of ethnically diverse men and women.